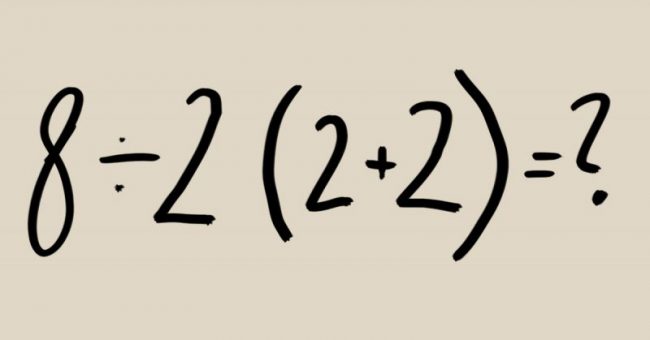 Autumn is the time we love to spend in bed, under the blanket, listening to the rain outside, and enjoying life as it slows down after the busy summer. No one will judge you because you want to get a bit lazy now, but this does not mean that you shouldn’t find time to sharpen your mind and exercise your brain!

Now, we challenge you- a math problem that has the Internet divided into a feud! It has gone viral after netizens cannot agree on the right answer!

Will you give it a try?

After it was shared by Twitter user @pjmdoll, this equation has divided Internet users into two groups- ones that insisted the answer is 16, and the others who believed it is 1. 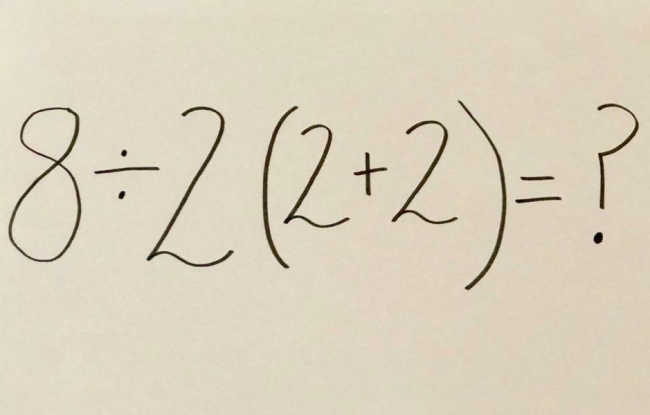 The first thing they disagree on is whether to apply the principles of PEMDAS or not. The acronym stands for Parenthesis, Exponents, Multiplication, Division, Addition, and Subtraction.

In the case of a math problem with two or more possible operations at any given time, PEMDAS dictates the order of what to calculate first, second, and so on.

One user explained this theory:

Yet, some Twitter users added that the principle of BODMAS (Bracket, Of, Division, Multiplication, Addition, and Subtraction) can also be used.

One user explained this theory as well:

“Answer is 1. (Enough explanations below)

For those who think it is 16 (including math teachers):

Application of BODMAS means removing operators. You should remove brackets first before moving to the next operator.”

Many agreed that the math problem can have two correct answers, depending on the Math principle one has learned at school.

Many have tried solving it by using a calculator, and noted that “ even the machines are confused.“

Yet, experts explain that the problem has been written in a confusing way, intentionally, which is the main culprit for the debate online.

In fact, it could be solved either way, depending on if one is using BODMAS or PEMDAS.

However, Ferndale High School math teacher, Mr. Kelly, claims that the answer is 16, and everyone who got the number 1 was using an outdated version of the order of operations.

“When it’s multiplication or division, you move left to right, not right to left. So that’s why some students are confused and multiply before divide. The multiplication does not come first in this situation. The division comes first.”

Here is how to solve the equation:

When dividing or multiplying, move left to right instead of right to left.

There you have it!