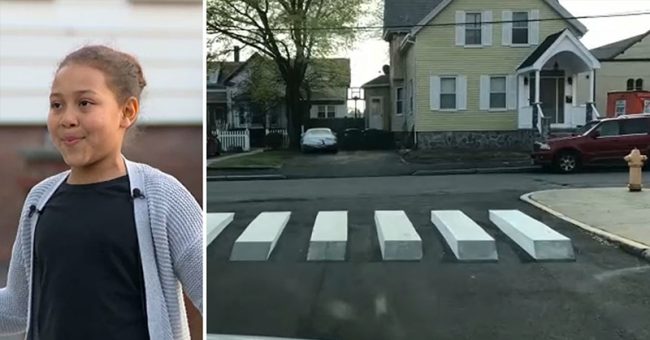 Unfortunately, the traffic is never too safe for everyone, and a second of bad judgment can have terrible consequences.

Even though all drivers should stop and yield to children crossing at crosswalks with stop signs or “school children playing/crossing” signs, this is not always the case, and Transportation Research Board reports that in the US, 100 children are killed in collisions while walking to or from school and 25,000 children are injured every year in school zone accidents.

This worried a 10-year-old genius from Medford, just northwest of Boston, Massachusetts, who started working hard to find a way to keep her schoolmates safe while crossing the road.

Isa spent months of extensive research with a classmate at her elementary school, named Eric, who has since moved out of the district. Eric’s brother was hit by a car while walking near the school but was fortunately alright afterward.

Yet, this stimulates these students to search for a solution that will prevent future accidents of this kind, before they shared their idea with the rest of the world.

Namely, Isa thought that in case crosswalks were solid obstacles that would move up and down to restrict or permit the passage of drivers, they would be able to stop drivers and ensure the safety of the students crossing the road.

However, as solid obstacles turned out to be impractical, they discovered an optical illusion was already being used in some parts of the world to slow drivers down. They worked together to bring it to Medford as part of a program at their school, the Center for Citizenship and Social Responsibility.

The 3-Dimensional crosswalk serves to get the attention of drivers in order to urge them to stop so that students can safely transit across the road. The optical illusion gets a lot of attention and makes drivers look twice, so they won’t speed near the schools.

The city eventually brought her idea to fruition, and the ingenious 3D crosswalk painting was completed near Isa’s school, and the crosswalks of two other schools were painted as well.

The city commissioned artist Nate Swain to paint the design of the crosswalk and they intend to do the same at three more schools in Medford.