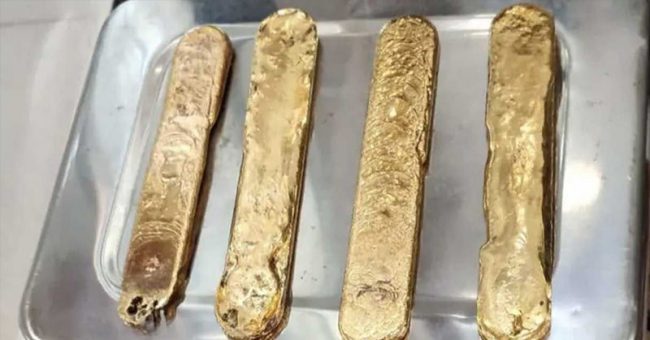 An Indian man was found carrying seven gold bars hidden up his bum on the airport- he was allegedly trying to avoid tax on gold.

Being properly prepared before a flight is very important, and the thing that takes most of our time is, of course, packing. We often want to carry more things, we then worry that our bags won’t fit in the overload bin, and so on.

But what if you were to take something really valuable with you? Believe it or not, one man did something outrageous while trying to hide the gold he was planning to take with him on the flight!

This Indian man had stowed seven gold bars up his bum!

The staff discovered him after he had just traveled on a GoAir flight between Dubai and Kerala. After he was noticed to walk awkwardly through the airport, he was taken into custody, and to their shock, they found a kilogram worth of gold hidden inside the man’s rectum!

This man thought he would be able to travel with seven gold bars placed inside his butt!

It was later speculated that the man was trying to get the gold into Kannur Airport to avoid a gold tax, as there is an 18% tax on gold in Kerala for the amount of gold that he was planning on bringing with him.

He intended to smuggle the gold bars and avoid the payment of the tax, but in the end, he had to pay the tariff regardless of the inconvenience he went through.

“AIU Kannur seized 1470gm gold in compound form (1316gm extracted) from a passenger who arrived from Dubai by flight G8 4013.

The gold was concealed in his rectum.”

People try to smuggle gold in various ways, so this is not something strange to airports. The practice is commonplace among people traveling from Arabic states to India.

Yet, in most cases, it is a small amount of gold, that can be easily hidden. What this man decided to do is a very desperate, or should I say, brave, move!

Nevertheless, with tons of security at the airport, your journey will probably turn into a nightmare if you are trying to smuggle something similar. Plus, tax evasion is a crime, and many people who have tried to evade taxes have eventually got their punishment.

When it comes to the tax on gold in Kerala, many believe that it is unfair and there is an ongoing debate on the subject there. It is expected that the entire thing will be finally resolved on February 18th.

How To Fix Your Sleep Problems With Science