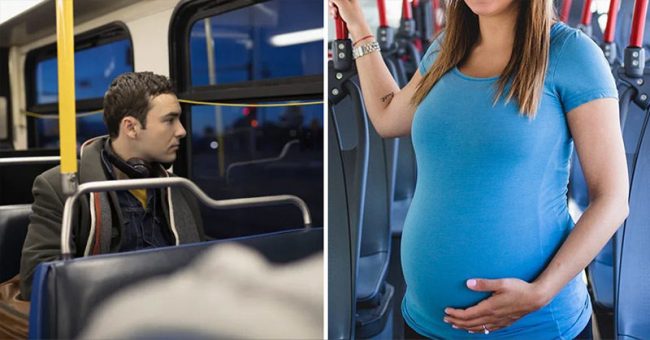 After him refusing to give up his seat to a pregnant woman on the bus enraged his family, one young man turned to the Internet community to see if his actions were right.

Since very small, we were taught one simple good manners rule- give up your seat for pregnant women, an elderly person, or a person with a disability.

Pregnancy is a blessed state of being, and it is not a disability. Yet, pregnant women often face many difficulties and fatigue, and giving up your seat for them to sit is the least you can do to ease their day.

However, have manners changed too much over generations? One young man opened a fierce debate online.

One night, when he was returning home from work, he refused to give up his seat on the bus to a woman who was pregnant. He then turned to the Internet for an opinion, and posted his experience on the popular Reddit forum Am I the Asshole.

After arriving home, his parents and sisters were angered by his action, so the man wanted to see if anyone else agrees with him.

He explained his day: after wrecking his car, was forced to take the bus to and from work as he was waiting for the insurance month. He went on to say that he works 10-hour shifts in a job that demands working on his feet for the whole day.

In addition to that, he had to walk another 15 to 20 minutes after he gets off the bus. Being exhausted and with very sore feet, he uses the time on the bus to sit and rest.

One night, a “heavily pregnant” woman gets on the bus during his ride back home. There are fewer seats available because of the COVID rules, and he was the closest passenger to her.

“I’m the closest to her, so she starts giving me the imploring eyes. I had my headphones on and tried to pretend I couldn’t see her, but once she started talking to me it became inevitable.”

He calmly refused her, explaining his situation. The woman cried, saying that she is a single mom, and at this point, things got worse.

“I told her I’m sorry, but that was her personal choice and she can’t expect other people to accommodate her life choices. We live in a state where birth control and abortions are free, so I don’t know why this should be my problem. It’s not my fault she decided to have a baby when she can’t afford a car.”

After arguing for a few minutes, an older man yelled at him, naming him a “worthless punk” and then offered the woman his seat. The bus suddenly hit the break while they were switching places, and both of them fell down.

The two of them then yelled at him and insulted him with bad names. He tried to ignore them until he got to his spot and get off the bus.

Well, most people criticized his behavior, adding that even if he was too tired from the long shift, pregnant women are more in danger to hurt themselves and their children if they fall.

“Did you know that being heavily pregnant really alters your balance, let alone the tired thing?

No – you didn’t ask her to be pregnant, but you can, as an able-bodied otherwise healthy person just choose to be nice. By being a selfish grumpy bugger a heavily pregnant person and an old person fell over. Bringing up the contraception/abortion/’breeding’ angle too really makes you an ass.

Others went on to say that his initial “no” wasn’t so bad, but the things he said later were absolutely wrong and rude.

“Public transit sucks. I assume there WERE other people who could have offered a seat but didn’t. Diffusion of responsibility does that, and once she “picked” this guy, it let everyone else feel morally superior because they totally /would have/ done it if she’d asked them but she didn’t.

But his attitude is so horrible that he’s the AH. I think her immediately jumping to being a pregnant single mom is weird (part of the reason I don’t believe this story), but him going off about BC and free abortions (what state is that???) and her bad decisions are what sealed it for me.”

Many people said that he doesn’t know her real situation, too. She might have the same car problems as him. What enraged people the most was him mentioning abortion.

They said that him taking his job which “sucks but the pay is good so I deal” is his personal choice too, so why he is more compatible to take the seat than her?

“The whole giving up seats for the pregnant and the elderly thing isn’t because they’re pregnant/elderly, it’s because these particular groups are more likely to fall and suffer serious injuries when they do.

OP, being tired sucks, but being tired and sore doesn’t make you more vulnerable to bad falls, being pregnant does. That’s why you’re supposed to give up your seat. YTA and a massive one at that (because of the rant).”

Let’s just hope that this youngster learns his lesson this time.

What’s your opinion on this?

Can You Solve This Tricky Math Riddle? Only Super Smart People Can