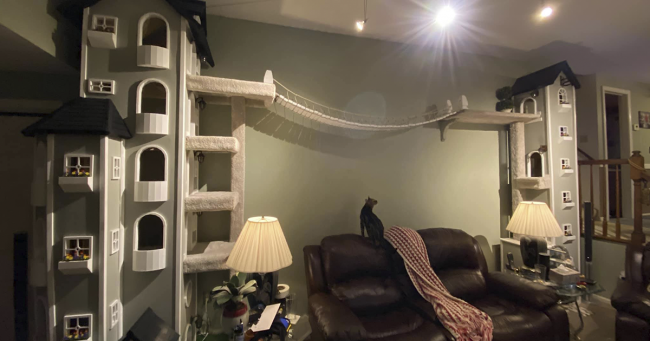 Cats are splendid, we must agree. These elegant, witty, and funny creatures simply brighten up our days. If you happen to be a cat owner, I bet you would give the entire world to please your beloved pet.

If so, you will surely fall in love with the following project done by Rob Coutu! This man from Windsor, Connecticut, decided to give his two cats a chance to exercise their climbing instincts, and built them two magical-looking towers! 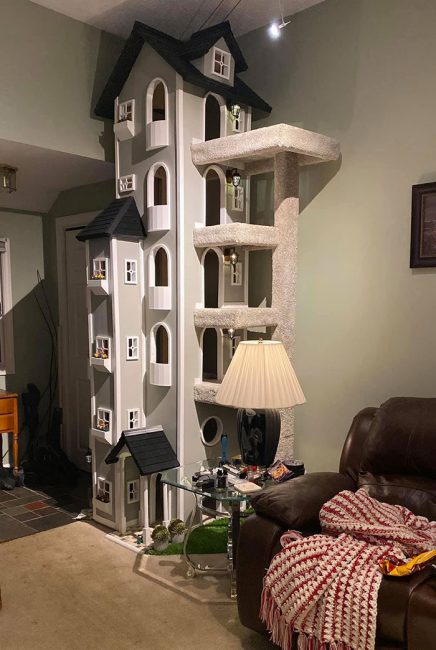 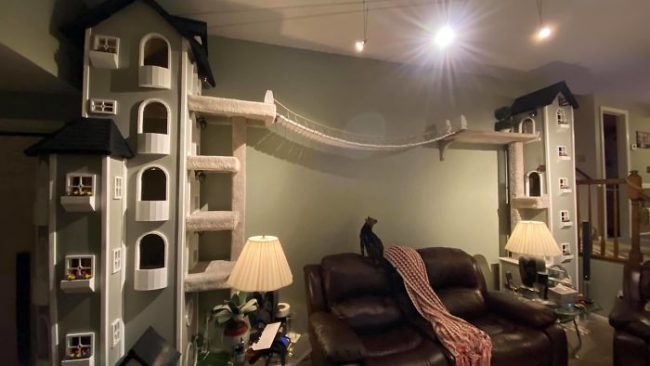 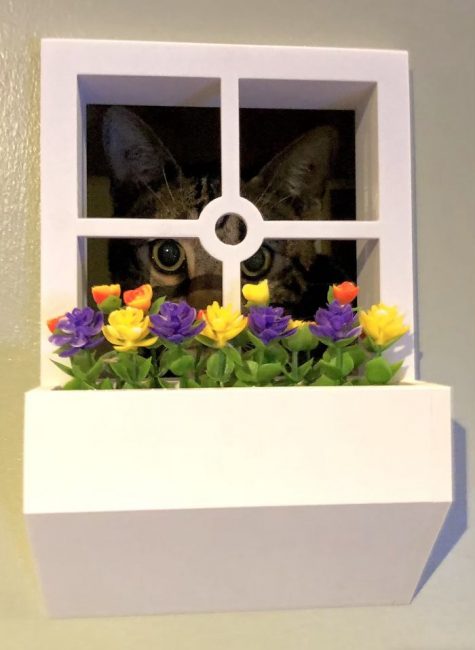 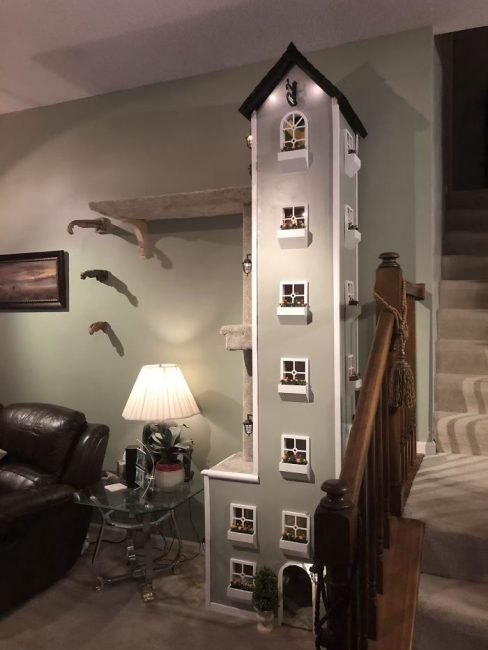 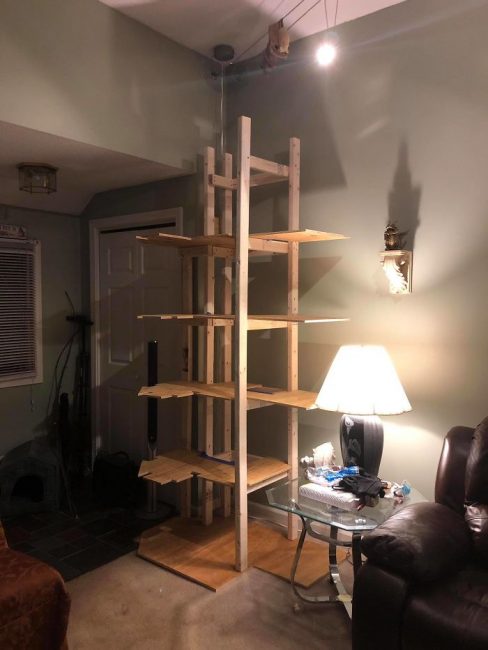 His cats, a red tabby, Tabatha, and a Savannah cat, Zach, must have fallen in love with the structures, as people who have seen them were simply charmed!

Rob explained that he has had cats all his life, so he knows what cats like.

The attractive towers are made of wooden frames, with carpeted walls, and each tower has multiple levels. They have balconies, 3D printed windows, decks, window boxes with flowers, and a bridge that links them, so the cats can move between them. 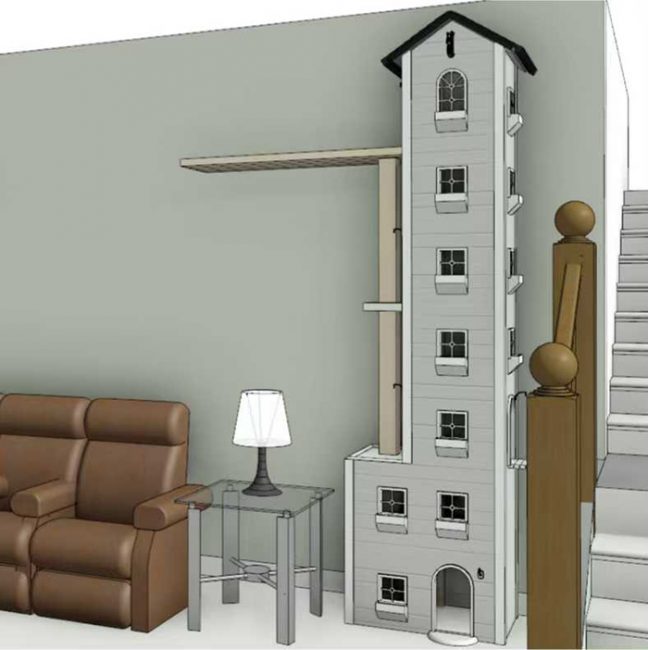 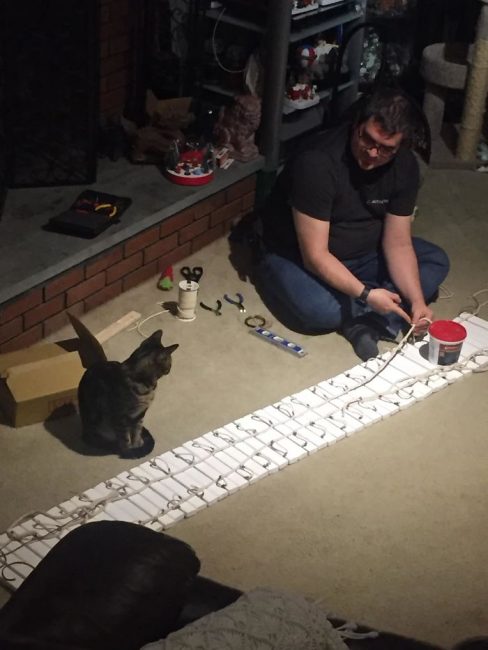 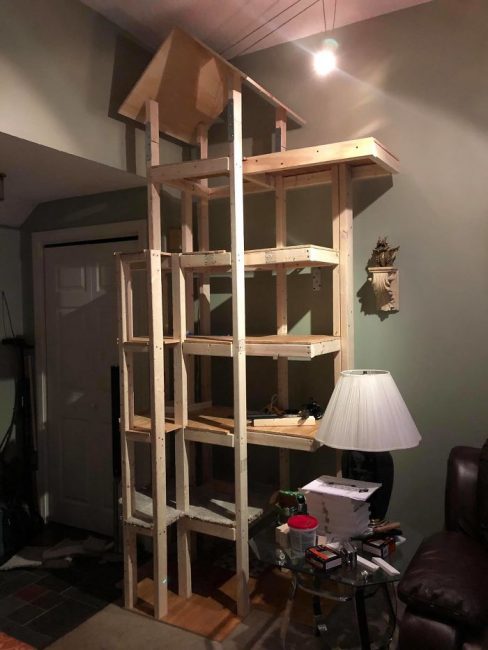 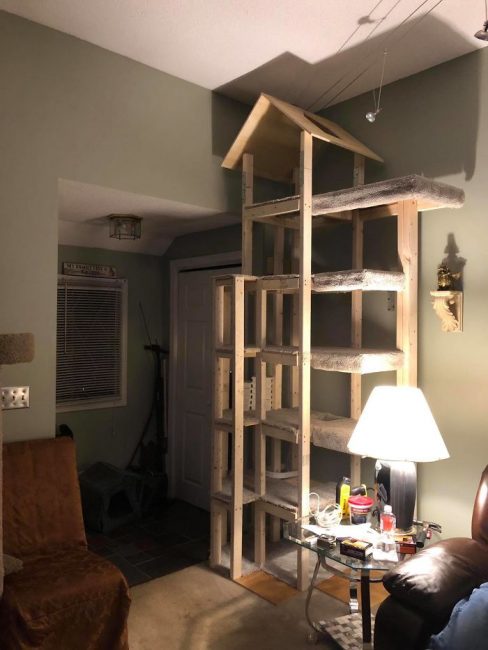 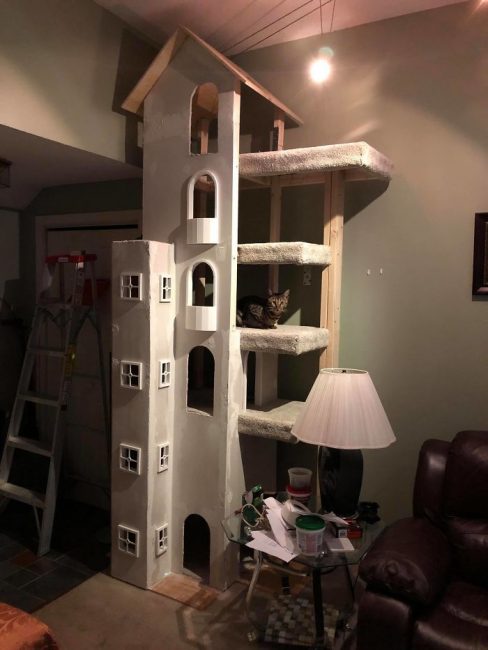 Rob started the project in May last year, when he posted a mock-up design of his ideal tower on a Facebook group. When people saw his idea, they fell in love with it, and started following him during the entire construction process.

The towers are still being improved, and he regularly posts photos of Zach in the towers, and explains his work in details. Rob said that Zach is so into the towers, that he has taken over both of them. He added that he even watched TV from there.

Rob got the idea after seeing a cat tree that someone else made, and he decided to make his own one, fun, practical, and sharping-looking one. 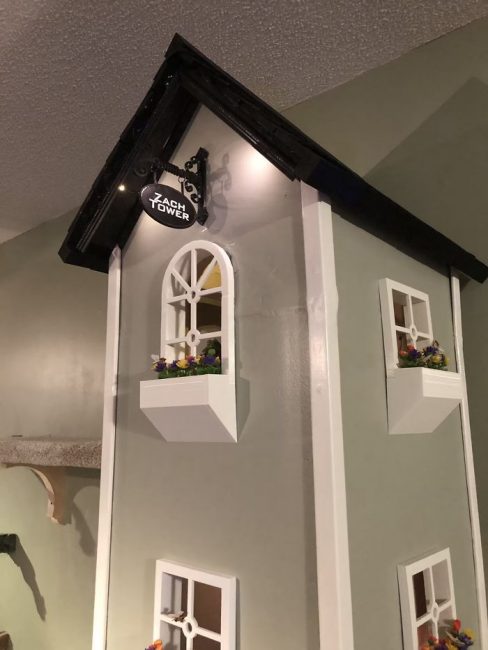 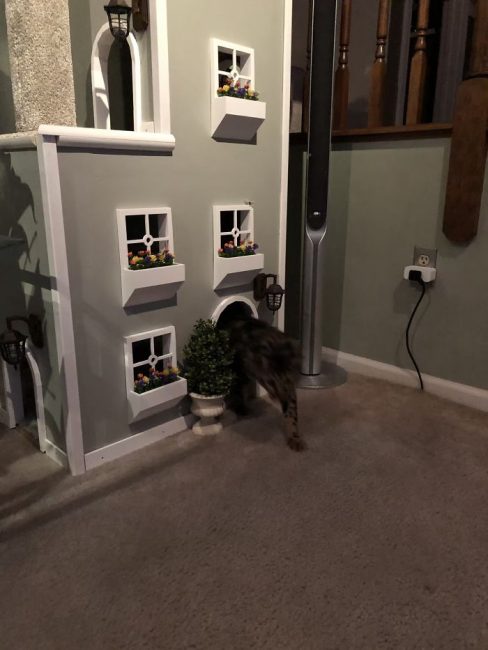 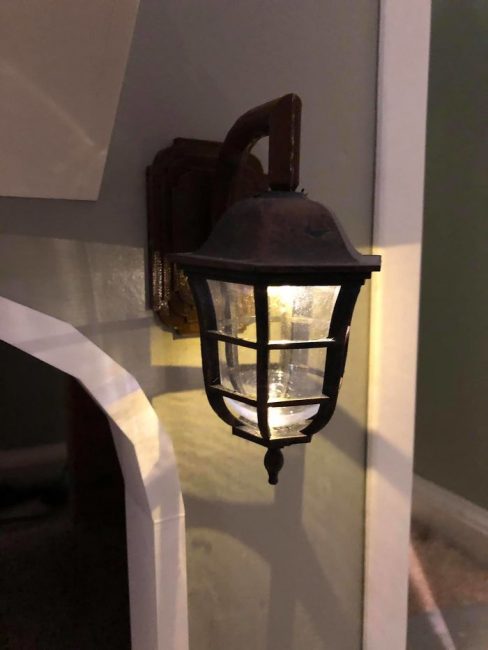 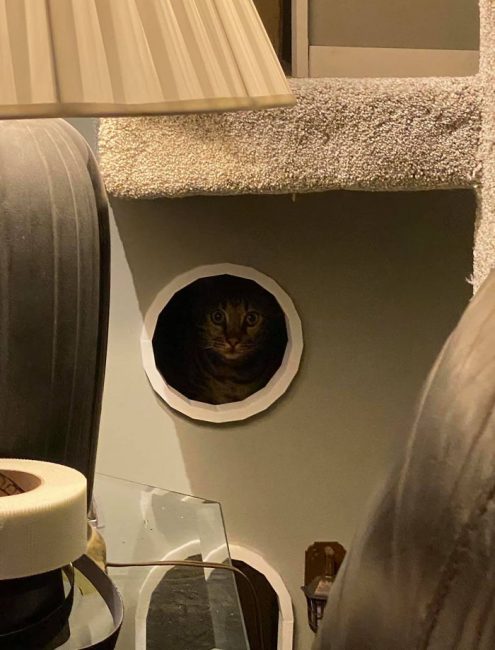 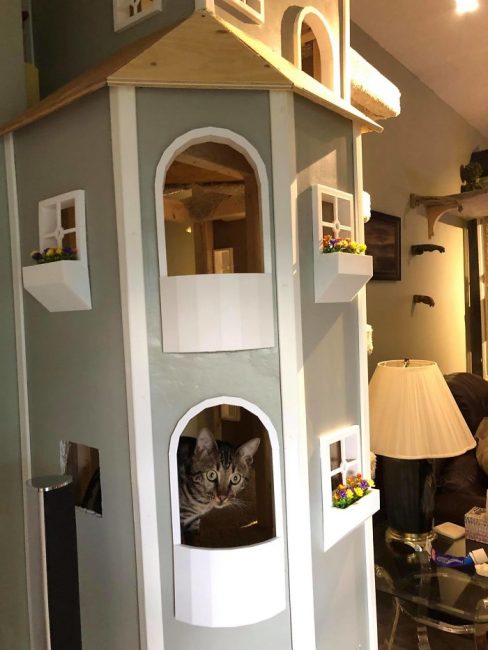 “The larger tower was built last and is almost complete. It incorporates some design changes based on how the cats interacted with the first one, such as the balconies and the deck landings. The dormer came from Zach, the Savannah, always looking up inside the roof of the other one.” 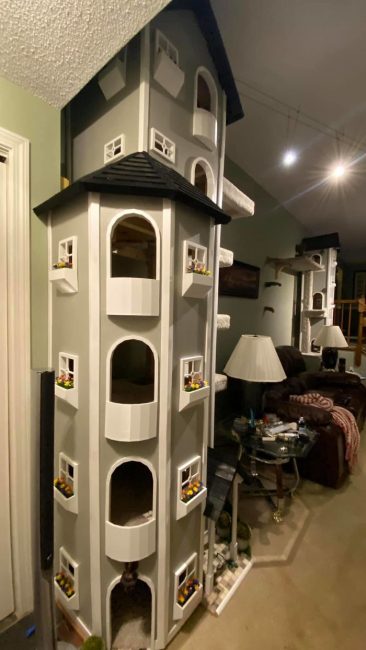 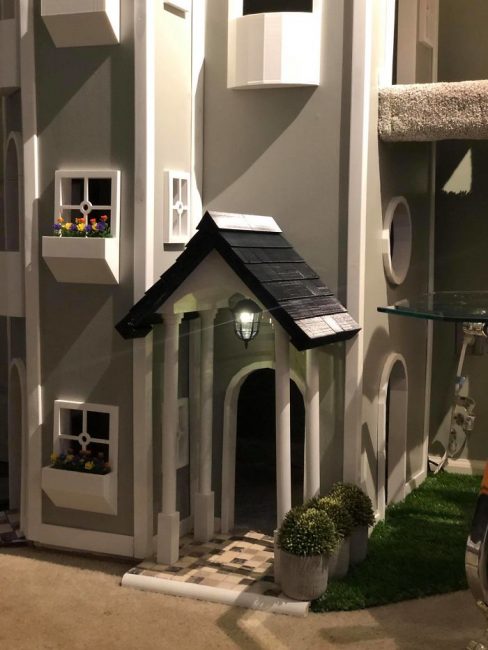 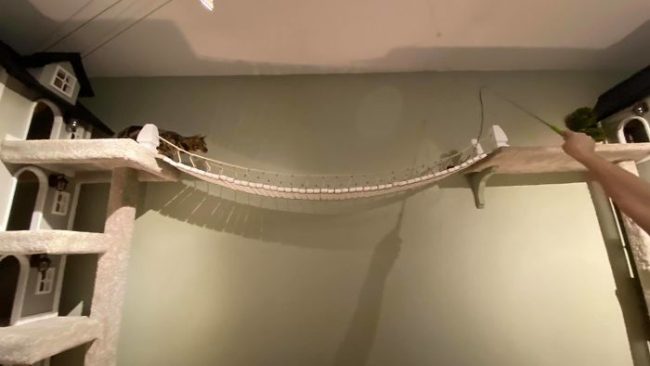 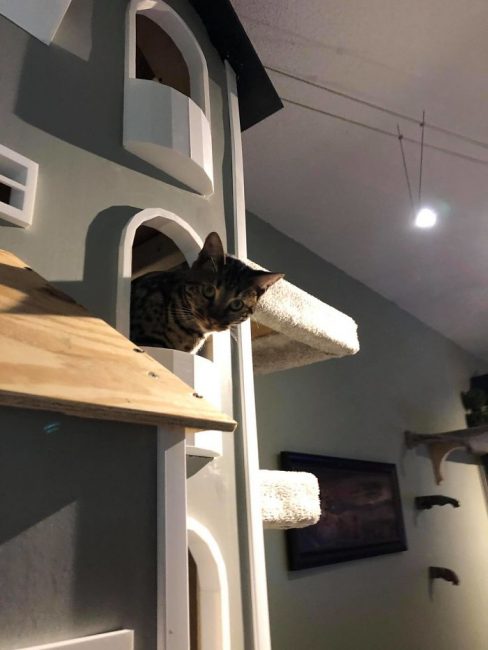 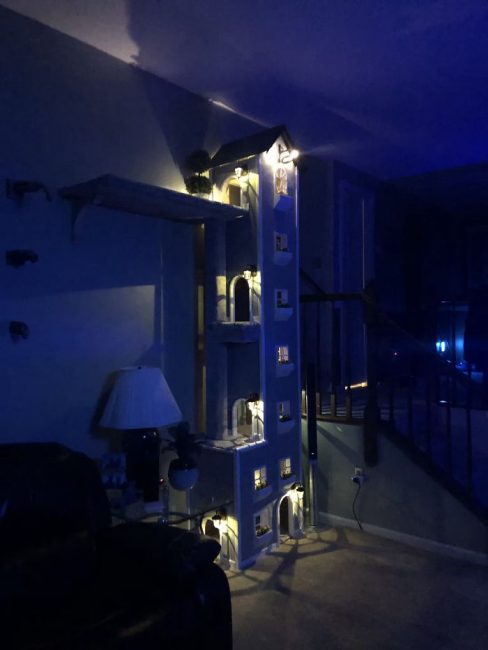 He has spent around $3,500 so far, but he adds that his pets have deserved it. He added that he cannot explain how much Zach loves it and how often he uses it.

Recently, he wrote that he plans to make towers for other cat owners:

“Because of the demand, I am considering making them for people as a custom install, once I have sorted out all the legal stuff. That said, the price would vary but the larger tower shown on the left would most like start around $5,800 est. plus tax and any extra related fees.

I will most likely offer the building plans (price not yet determined), once I can secure a non-piracy secure version to sell.

Custom designs will be offered at additional costs for both build and blueprints,’ he adds. ‘Do not take any shortcuts in building or purchasing these when they become available as the safety of the kitties are my foremost focus.” 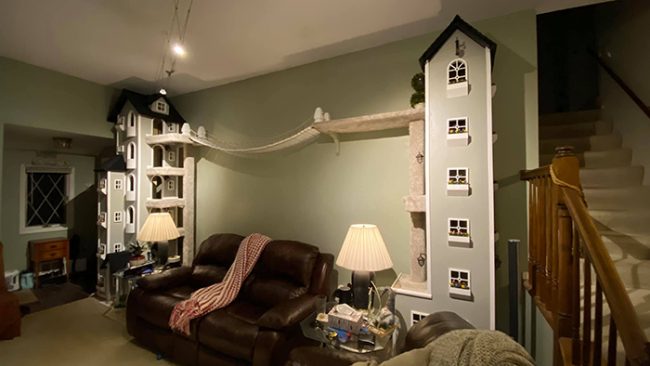 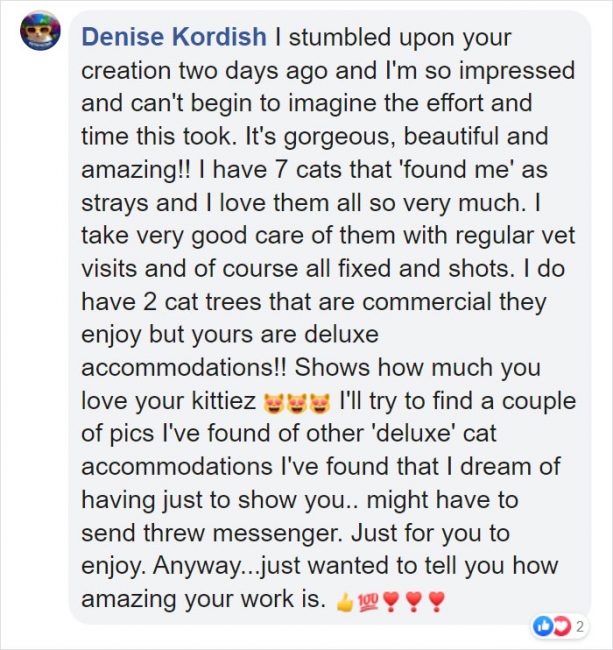