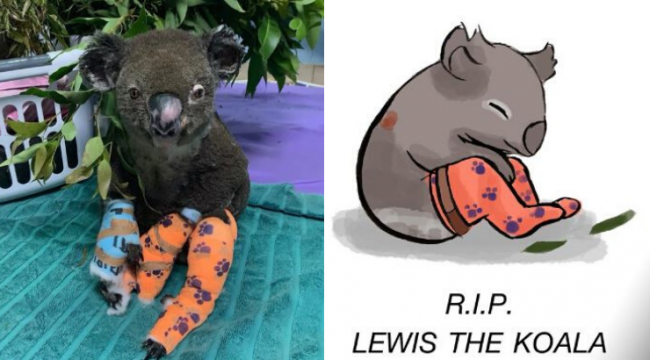 The world has one more reason to mourn: Lewis, the koala that was rescued from Australia’s horrific wave of bushfires has sadly died.

This koala drew global attention after he was rescued from the horrific bushfires in Australia but suddenly died after it was evident that his burns were not going to improve.

Ellenborough Lewis was brought to the Port Macquarie Koala Hospital after a woman rescued him from one of the several wildfires engulfing the state of New South Wales.

I know there is a lot going on in the world but I’m gutted by the news that Lewis the koala -- who was rescued from the Australian bush fires -- has sadly died from the injuries he sustained 😭🐨 pic.twitter.com/CiNKOwQFVN

The hospital warned that it was considering euthanasia as it had been determined that the 14-year-old koala’s “injuries and his pain are not treatable and tolerable.”

It eventually decided to euthanize Lewis after inspecting his wounds, which were not improving.

“Today we made the decision to put Ellenborough Lewis to sleep. We placed him under general anesthesia this morning to assess his burns injuries and change the bandages.

We recently posted that ‘burns injuries can get worse before they get better.’ In Ellenborough Lewis’s case, the burns did get worse, and unfortunately would not have gotten better.

The Koala Hospital’s number one goal is animal welfare, so it was on those grounds that this decision was made.”

The hospital has treated dozens of koalas injured from the bushfires which have burnt through over a million hectares in New South Wales alone. The blazes continue to burn and officials fear that the worst of Australia’s season is still to come.

The Rescue Collective, a Brisbane-based wildlife charity, reported that animal rescuers were only just now able to enter fire zones on the East Coast of Australia to witness what they described as “a wildlife apocalypse”.

In a Facebook post, they declared that as the embers cool and the smoke begins to clear, the realized that the situation is far worse than they could ever have imagined.

The dramatic footage of Lewis being rescued by a woman, Toni Doherty, who ran into a raging brushfire to save him went viral.

Lewis was seen badly burned with patches of fur missing, and Tony saved him by pouring bottles of water on him and wrapping him in a blanket.

Doherty said that Lewis was crying and screaming because of the burns. He was burning on the legs, underneath..and she explained that his crying broke her heart.

Experts claim that anywhere from several hundred to over one thousand koalas have died in the fires sweeping over the last two months.

Christine Adams-Hosking, a postdoctoral research fellow at the University of Queensland in Australia, said that koalas suffered the most in the fires, as they are helpless. Birds can fly, kangaroos can hop fast, but these little marsupials are very slow, and get stuck where they are.

Experts have different opinions regarding the extent to which the koala population is endangered, it remains a fact that koala populations continue to decline due to various reasons, such as deforestation, climate change, and draught.

Ellenborough Lewis, the koala that was saved from a New South Wales bushfire by a woman, has been put to sleep in a hospital due to his extensive burns on November 26, 2019.#ThaiPBSWorld #RIPLewis pic.twitter.com/6x7YLOCp7B

The Port Macquarie Koala Hospital’s assistant clinical director Scott Castle explained that the regions affected by the bushfires need to be properly surveyed so they can see the full extent to changes in population dynamics.

The alarming state of their population now worries the rest of the world just like it does in Australia and is raising fears about climate change and the future of the species. Numerous organizations are now struggling to save as many koalas as possible

The adorable creatures live near the habitat of the people, in the woods that are closely situated near such sea shores.

Plank Record Broken by Woman Who Held It For 4 Hours