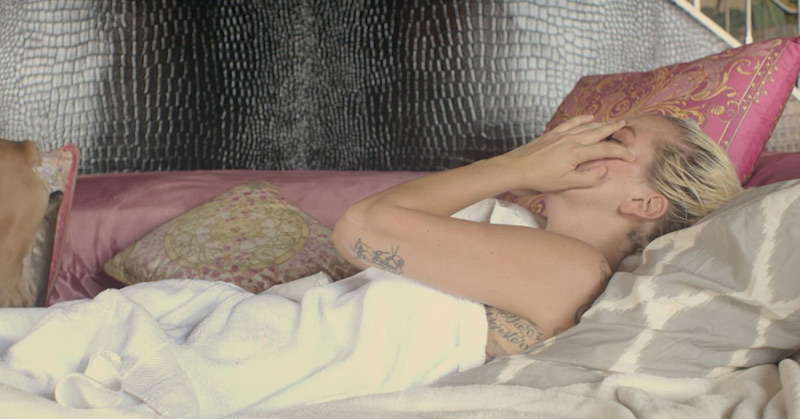 Fibromyalgia affects about two percent of people in the United States, and it is manifested by chronic widespread pain and tender spots throughout the body.

This pain can be debilitating, and it can be accompanied by various other symptoms like headaches, chronic fatigue, sleep disturbances, and mental confusion, which fluctuate over time, leading to “flares.” These flares are most often triggered by physical and psychological stressors.

This month, Netflix released a documentary “Gaga: Five Foot Two” which depicts the pain of one of the best-selling musical artists of the 21st century, due to fibromyalgia.

Gaga decided to let her fans notice her pain while speaking about the debilitating symptoms she experiences. In one scene, she lies on a couch crying, speaking about the muscle spasms that wrack her body. In another scene, she is at her doctor’s office, waiting to receive a round of injections, while her makeup team prepares her for an interview later that day.

“Who gets their makeup done while they’re getting a major body treatment?”

Yet, multitasking is of vital importance in her struggle to pursue her ambitions while coping with fibromyalgia pain.

In the opening scenes of the documentary, she says:

“If I get depressed, my body can spasm.”

“I get so irritated with people who don’t believe fibromyalgia is real. For me, and I think for many others, it’s really a cyclone of anxiety, depression, PTSD, trauma, and panic disorder, all of which sends the nervous system into overdrive, and then you have nerve pain as a result. People need to be more compassionate. Chronic pain is no joke. And it’s every day waking up not knowing how you’re going to feel.”

The aim of her confessions is to raise the awareness of this debilitating condition, that affects people of any age.

“Anyone can develop fibromyalgia, although it affects around 7 times as many women as men.

The condition typically develops between the ages of 30 and 50, but can occur in people of any age, including children and the elderly.”

The exact cause of the condition is still unknown, but the Mayo Clinic explains that “ it most likely involves a variety of factors working together. These may include:

Fibromyalgia has long been considered a psychosomatic condition with no physical cause. Nowadays, researchers challenge these beliefs, but the skepticism and disbelief from medical professionals, coworkers, friends, and others contributes to the stigma that many sufferers face.

According to Janet Armentor, Ph.D., an associate professor of sociology at California State University Bakersfield,

“One of the bigger challenges is that this illness is contested among the medical establishment and among the general population. There’s a lot of disbelief and lack of understanding.

And in the interviews that I conducted with women who [were] diagnosed with fibromyalgia, some spoke of that challenge: ‘This is real. This is not in my mind. I’m actually feeling real symptoms and real pain.”

Dr. Kevin Hackshaw, an associate professor in the Division of Rheumatology and Immunology at The Ohio State University, speaks about the biochemical changes that occur in people with fibromyalgia which have been identified by modern scientists:

“Studies have shown that there are documented biochemical changes in these patients. For example, spinal fluid can be obtained from patients with fibromyalgia, and you can see elevations in certain neurochemicals. So it’s not a made up diagnosis. It’s a true nerve disorder manifested as diffuse musculoskeletal pain.”

Yet, there is not a simple laboratory test that can diagnose it, and doctors rely on the symptoms, following criteria adopted by the American College of Rheumatology in 2010.

There is no known cure either, but there are many treatment options that are of great help. First of all, doctors advise lifestyle changes and other non-pharmaceutical treatments.

“We know that regular exercise is essential in order to try to minimize some of the symptoms. There’s also a good body of research that suggests that meditation and other types of mindfulness exercises may be beneficial in terms of alleviating some of the pain.”

Additionally, doctors also give a low dose tricyclic antidepressant (TCA) or serotonin and norepinephrine reuptake inhibitor (SNRI), and “these meds are typically used not for their antidepressant characteristics, but because they increase levels of certain neurochemicals at nerve endings, and those increases lead to a decrease in pain signals going to pain processing centers in the brain. ”

The Centers for Disease Control and Prevention advise fibromyalgia sufferers to:

These 30 minutes can be broken into three separate ten-minute sessions during the day. Regular physical activity can also reduce the risk of developing other chronic diseases such as heart disease and diabetes. Learn more about physical activity for arthritis. You can exercise on your own or participate in a CDC-recommended physical activity program.

Note that recognition and social support are of critical importance for people with fibromyalgia and other chronic conditions as well.

“One of the more significant findings of my research is that because of the disbelief and lack of understanding they face, they tend to isolate themselves, which can lead to a whole range of social problems and well-being issues.

Often fibromyalgia is so invisible from the outside that people don’t recognize that this is happening to people all around us. So I think that to have someone with a high profile say, ‘I’m experiencing this and understand what you’re going through.’ That’s really important. “

“Lady Gaga doesn’t want to let fibromyalgia define her. There are still things that she wants to accomplish. But she knows the price and that she has to manage what’s important to her, and what she needs to do to cope with this illness. And I think that’s a very useful message.”