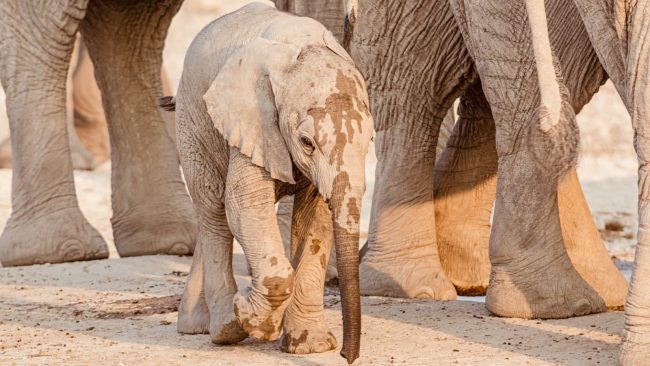 Kenya is the natural habitat of numerous iconic animals, like cheetahs, giraffes, elephants, rhinoceros, and leopards, many of which are prime targets to poachers. It is illegal to kill the endangered animals in Kenya, and the Wildlife Conservation Act from 2013, carries a life sentence or fine of $200,000 for offenders.

It is a fact that the animals are in peril, even though poaching has been on the decline as a result of the increased attention to conservation and wildlife law-enforcement efforts.

The number of black rhinos in Kenya is below 1,000, whereas the elephant population is hovering around 34,000. In 2017, poachers killed 9 rhinos and 69 elephants, which seriously cancels out the growth rate of the population.

Yet, the tourism chefs of Kenya claim that poaching has been on a downward trend largely due to the improved wildlife law-enforcement efforts and investment in conservation.

Poachers are attracted by the ivory tusks of elephants, which are highly valuable in the Far East. The African Wildlife Foundation (AWF) reported that up to 70 percent of illegal ivory ends up in China, where it sells for up to $1,000 a pound. Even though China banned it, black markets remain.

On the other hand, the horns of rhinos are believed to treat impotence, fever, cancer, hangovers and other medical ailments, and sell for about $30,000 a pound, which is more than gold.

AWF warns that at current poaching rates, the iconic African wildlife may be gone within our lifetime.  These poachers use high-powered technology and weaponry to track and kill numerous animals at once without being detected.

That is why the Kenya Wildlife Service (KWS) intends to increase its number of wildlife crime prosecutors, which are currently only two for the whole country. The measure was enabled by a collaboration between Kenya’s national prosecution service and conservation organization Space for Giants.

On March 31, 2018, during the funeral of the world’s last male northern white rhino, tourism minister Najib Balala, had warned poachers they would face stiffer punishments, and anyone who is caught with ivory or killing wildlife will be jailed for life.  He has been advocating for stiffer punishments for poachers as he believes that the current penalties were not proportionate to the damage caused by poachers.

He explained that he believed harsher punishments are a must as the current measures do not add up at all. To illustrate this, he says that while a kilo of ivory costs about $60,000,  the fine for a poacher who caught many kilos of ivory is only about $199,000.

According to Max Graham of Space for Giants, KWS has the capacity to catch and convict criminals under Kenya’s robust laws. He says that a ranger in the field should not have to experience the frustration of confronting a wildlife criminal they arrested a week earlier walking free again because of an acquittal.

Some rangers in Kenya started using infrared and thermal cameras to spot poachers and protect the remaining endangered populations, which are kept protected in sanctuaries.

Brian Heath, a conservationist who runs conservation group the Mara Conservancy, says that they were not able to find those people earlier, but now, the poachers are saying it’s just not worth going out because the chance of getting caught is getting higher and higher.

In other areas, like South Africa, a lot of rhinos have actually been airlifted out of poaching-prone areas and into safer locales, such as Botswana, where poaching is rare.

Elephants and rhinos are also threatened by habitat loss, as nowadays, they only occupy about 19 percent of their historical ranges in Africa. Their natural habitats have been destroyed by human encroachment, including the building of roads, cultivation of crops, livestock production, and civil unrest.

These animals are incredibly important and beneficial to the environment so if we do not protect them, the world will suffer a devastating loss.

Many believe that only a strict stance of Kenya against poaching will save these invaluable species, but AWF adds that across the diverse wild lands, management authorities need data-driven solutions to improve  anti-poaching capacity to allow remaining priority populations to recover from crises, while community-level interventions should explore different economic opportunities that secure biodiversity, since the pressure on natural resources grows with increasing development, infrastructure, and urbanization.

This article was originally published under the title “Kenya Announces Death Penalty for Poachers”. However, it has come to our intention that the information that the tourism and wildlife minister of Kenya had announced plans to introduce the death penalty for wildlife poachers is untrue, and he was not at the meeting at all. His colleague read a statement, but he claims that nothing he mentioned was related to the death penalty for poachers. He explained that one of the local leaders on the meeting casually said that poachers should be killed but nothing official came from the ministry.

20 Awesome Tips For A Beautiful Life

Engineer Invents Shelters For The Homeless That Retain Heat During Winter