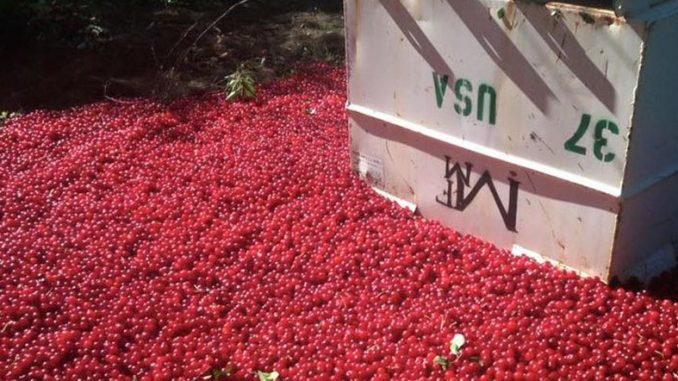 Traverse City, on the coat of one of the biggest freshwater lakes in the world, Lake Michigan, in North-West Michigan, is the “Cherry Capital of the World.”

Cherries are literally everywhere, sold in stores, markets, on the street, stands. Sadly, not all the cherries produced there end up being used.

According to a farmer from Traverse City, cherry farmers are forced to dump huge amounts of cherries to rot in the sun, in order to make way for imported crops from other countries.

He stated that this is due to some little- known government marketing program. He shared this on July 30 on his Facebook account, and his post soon went viral, with around 67,000 shares.

These are the words of Marc Santucci, the owner of the 80-acre Santucci farm:

“These cherries are beautiful! But, we have to dump 14% of our tart cherry crop on the ground to rot. Why? So we can allow the import of 200 million pounds of cherries from overseas! It just doesn’t seem right…”

Via his post, he tried to make people aware of the harmful and outdated consequences of the agreement imposed by the U.S. Department of Agriculture.

“What do you think? Please share this on your Facebook page??? Just to let everyone know we are not allowed to donate or in any way use diverted cherries. I have people who would buy them if I could sell them.”

He grows 30 acres worth of tart cherries annually, but a marketing order passed in 1937 by the U.S. Department of Agriculture as part of the Agricultural Agreement Act limits the amounts that can be sold in order to make way for imports, which forced farmers to throw away a great portion of the crops.

For the Detroit Free Press, Mr. Santucci added that this act was a “vain attempt to prop up the price of cherries.” According to Perry Hedin of the Cherry Industry Administrative Board in DeWitt, MI:

“Cherry growers have been paid better prices over the past 20 years because of the order, which was opted into by tart cherry growers and processors in 1995.”

Therefore, the goal is to stabilize the recent unpredictable yields for farmers who grow these crops. Yet, in the case of smaller, independent, medium scale cherry growers like Mr. Santucci, who do not have the processing equipment, this significantly affects their profits.

They do not have the required equipment to process cherries into products with a longer shelf-life, like dried cherries, or cherry concentrate.

Due to all this, Santucci says that he has no other option but to leave his crops to rot. He, together with a host of other cherry farmers, was forced to lose the market just to leave room for imported products, for example, from Turkey or Eastern Europe.

What’s more, he adds that they are not even allowed to donate them to food pantries or shelters, but must leave them to rot. Apparently, the CIAB sends out people to check if cherries are left to rot in order to boost their marketing order.

“If I have to sell these excess cherries for less, I might not make that much more. But if we’re ever going to stop the increase in imports, we’ve got to compete with them head to head on every cherry we produce. If we don’t do that, we’re leaving the market wide open to them.”

Santucci believes the cherry board will consider other options and maybe the Congress will consider to take up the issue.
“Dropping cherries on the ground isn’t going to change” the increasing low-cost cherry import dynamic, “and will probably only encourage it.”

“I posted (the photo) because I want people to know that we sometimes do stupid things in this country in an attempt to do the right thing — we end up doing the wrong thing,” he explained to UpNorthLive.com. “Unless we can make the people who count understand and know what’s going on, we’ll never change it.”

Regarding all this, the thousands of cherries wasted, even though they are completely acceptable, and the worried farmers who struggle for a change of the current policy, it is a fact that the cherry industry must deal such issues while going forward.

I Had No Idea That I Showed Signs of Hypothyroidism...Thank God I Found This Today!