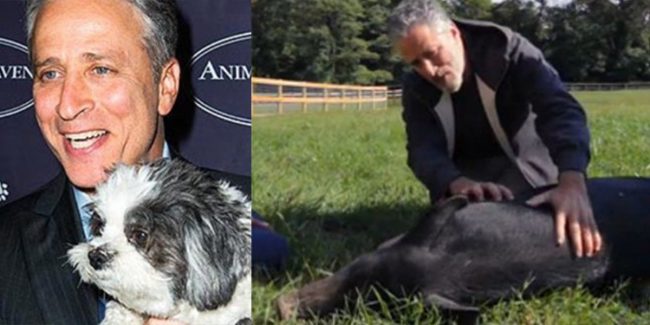 We all love Jon Stewart, and this popular comedian has inspired us t take action so many times before.

The public was delighted by his tireless campaign to get justice for firefighters and servicemen who became sick as a result of 9/11, and now, he decided to start rescuing animals, and advocate for animal rights!

In 2015, he and his wife Tracey have bought a farm in New Jersey, and in 2015, they announced their plant to turn it into a sanctuary for various abused animals,  especially those who have been taken from factory farms.

Their sanctuary at Bufflehead Farm is a home for two pigs, three rabbits, two guinea pigs, four dogs, two fish, and a bird. However, they also intend to open up an educational center on the property as well.

Jon Stewart and His Wife Are Starting a Farm Animal Sanctuary https://t.co/JVJtjUrBOO pic.twitter.com/Jr4gLUBEM7

They also plan to add a lot more animals to the farm, including goats, turkeys, pigs, sheep, and cows.

Tracey is a vegan who wrote a book that helps people understand animals, and she inspired Jon.

She even announced that the farm is going to be the New Jersey branch of Farm Sanctuary and that they intend to build new advocates, new curious learners, and new leaders for the movement.

All this time, Jon has been the voice for those who don’t have one, and his latest venture has made him the voice for all the animals out there too.

Plant These Just Once - Harvest for Years To Come