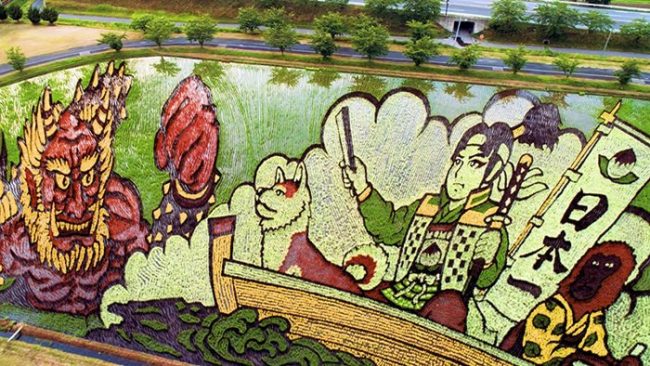 Japanese locals have turned rice fields into art galleries, and Tanbo art has attracted the attention of every art aficionado.

Tanbo art has become quite a tradition in Japan, and artists across the world have recognized it as an incredible form of art.

Japan is a traditional country and it has the most inspirational craftsmanship and designing skills. Some of these arts are still alive, and the people of Japan nourish their ancient techniques and methods.

Rice is a staple food in Japan. Rice fields cover a large portion of the country. Sadly, this crop is no longer grown in urban areas.

In 1993, people living in the village of Inakadate, in Aomori Prefecture, wanted to change this. They have come up with the most brilliant way of rejuvenating the village.

Rice was a common crop in the village for 2,000 years, and locals revived the ancient tradition by starting a paddy field near the town hall. This was their canvas, and their artworks are magnificent. Locals use heirloom and new strains of seeds to get different shades.

Mount Iwak, a stratovolcano in the Aomori Prefecture, was the very first masterpiece. It took a lot of time and planning to create the volcano.

The final creation was more than rewarding. It was time to move on to a bigger challenge.

Locals were divided into two groups. Some of them wanted to create traditional pieces. Others preferred international art. That’s how Tanbo art was born.

Today, Inakadate is a tourist attraction. The number of tourists reaches its highest peak in July and August. To get a better look at their rice masterpiece, locals built a 22-meter mock castle tower at the village office. They also built an observation tower at the second Tanbo art location.

The village became an incredible art gallery. More than a thousand local volunteers work together to finish the art project. Most of them are students and they all plant different types of rice.

Similar artwork can be seen all over Japan, Korea, and Taiwan. There are over 100 natural galleries offering Tanbo art.