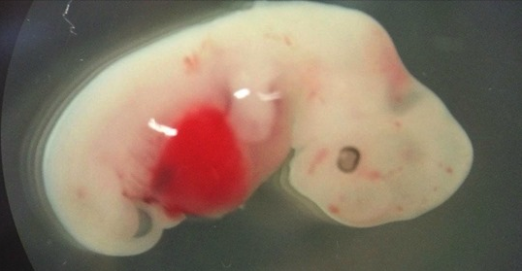 This Japanese stem cell biologist intends to grow human cells in rats and mouse embryos. The embryo genes will be modified in order not to produce a pancreas and injected with human cells.

Then, he will transplant them into surrogate animals where they will grow a pancreas made of humans cells. After their birth, they will be monitored in the next two years, just like the brains of the rodents.

The goal of the research is to produce animals with organs composed of human cells that could be transplanted into humans.

Yet, it is different than xeno-transplantation where organs from one species are transplanted into another, as human organs will be grown in an animal from the embryo stage.

Until March, Japan explicitly prohibited the growth of animal embryos containing human cells beyond 14 days or the transplant of such embryos into a surrogate uterus.

Yet, in March, the education and science ministry of Japan issued new guidelines which allow the creation of human-animal embryos which can be transplanted into surrogate animals and brought to term.

Nakauchi claims that his intention is to proceed slowly, and for some time, he will not try to bring any hybrid embryos to term. He also intends to use this time to have a dialogue with the public, which is feeling anxious and has concerns.

Initially, he will grow hybrid mouse embryos until 14.5 days, when the animal’s organs are mostly formed and it is almost to term.

He will repeat the same in rats, growing the hybrids to near term, about 15.5 days. He will later apply for government approval to grow hybrid embryos in pigs for up to 70 days.

The professor explains that if this experiment succeeds, they will be able to help a lot of people, and also use animal-grown human cells or tissue for toxicology studies or drug screening.

Before the actual surgeries, surgeons could practice them on intact human organs, and researchers could investigate aspects of early human development that have never before been accessible.

Yet, he adds that human organs will not be created immediately, but it will help advance research they have been preparing for in the last decade.

The professor was also in the team that created the human-sheep chimera in 2018 with embryos that had 1 human cell in every 100,000 sheep cells. The embryos were destroyed after 28 days.

However, while this type of research could be revolutionary, as organ donation is a huge concern for the medical field, and 20 patients die waiting for a transplant daily, there are ethical concerns about a humanized animal.

In 2015, the NIH in the US stopped funding for these types of animal experiments, and the public survey it conducted revealed that 22% of people were against this research.

Human and animal experiments are risky, some experts warn that certain parts of the animal might develop more human cells, while others are worried that the brain will take on human cells and develop human abilities or attributes, making it an “ambiguous creature.”

Researchers involved in the Japanese experiments plan to suspend the environment if they discover human cells in more than 30% of the rodent brains.

Feta: The World's Healthiest Cheese That Nobody Talks About

Goodbye Nursing Homes! The New Trend Is CoHousing With Friends