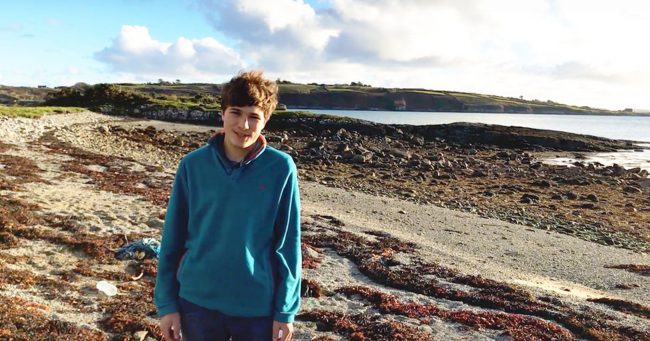 Scientists are constantly warning about the disastrous effects of pollution on the planet, so young people have started taking initiatives to help in the saving of our environment.

One of the solution-seekers is the 18-year-old Fionn Ferreira, an Irish wunderkind, who won the grand prize at the 2019 Google Science Fair for creating a method to clean the oceans from microplastic.

His project uses a novel but effective methodology, that involves magnets to attract microplastics from water. Namely, Ferreira found that a magnetic liquid called ferrofluid attracts the tiny plastic particles and eliminates them from the water.

The young scientist said that he was looking forward to applying his findings and contributing towards a solution to this issue.

The Google Science Fair invited 24 young scientists from around the world, chosen from 100 global entries to its Mountain View, California campus, and Ferreira’s grand prize is $50,000 in educational funding.

He said that he got the idea when he found a rock covered in oil near his remote coastal town in Ireland’s southwest, as he noticed small bits of plastic stuck to the oil.

Those microplastics are a result of beauty products, various textiles and larger bits of plastic after breaking down, and as they are less than 5mm long, they escape water filtration systems and end up polluting waterways, where marine animals find them and ingest them.

Additionally, they also end up in us, especially in people who drink bottled water.

A recent study has found that every year, people in the US alone eat, drink and breathe between 74,000 and 121,000 microplastic particles, depending on their age and sex. People who drink bottled water add up to 90,000 plastic particles to your estimated intake.

Since plastic and oil stick together, Ferreira wondered if it would be the same in case he used ferrofluid, which controls vibration in speakers and seals off electronic devices from debris.

As soon as the microplastics found the ferrofluids, they adhered together. At this point, he dipped a magnet to the solution, which attracted the combined ferrofluids and microplastics, and left only clean water behind.

After a little over 950 tests, the method was found to be 88% effective in eliminating a variety of microplastics from water, surpassing his original hypothesis of an 85% removal rate.

He explained that testing resources can be scarce since he lives in a remote part of Ireland, but this did not stop him from accomplishing his goal.

He also added that he would like to encourage others by saying you don’t have to test everything in a professional lab. This was the reason why he built his own equipment.

However, no matter how proud he is of his project, he claims that it does not solve the issue completely, as the only way to eliminate plastic from the water is to stop using plastic altogether.

Screen Dependency Disorder Is Real, and It Damages Your Child's Brain