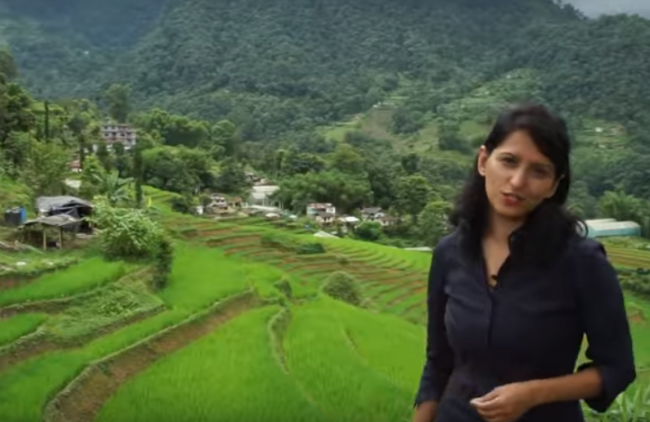 The organic movement is one of the best things that have ever happened to the mankind. Some call it a trend, while others believe it’s a necessity. Toxic chemicals are everywhere around us, and that’s in no way good. The world is so toxic that it’s literally impossible to avoid the poison.

Most countries have hard time implementing organic agriculture, and we have large companies like Monsanto pushing their toxic products on the market. The US still approves GMOs and toxic pesticides.

According to the FDA, this is an innovation that eases our living. No, it doesn’t. Unlike the US, some countries are making a small step at a time, and now they are back to organic farming.

The Himalayan state of Sikkim in India made a huge progress, and they are now supporting the health of pollinators, human beings and environment.

In January 2016, the state of Sikkim became the first fully organic state in India and maybe even the world. There are so many things these people try to change, but they have already experienced the benefits of their big move.

Bee populations are on the rise. Cardamom and other plants dependent on bee pollination are now providing higher yields. The production of cardamom has increased by 70% as reported by BBC.

The quality of the soil has improved, and the area is marketed as an eco-friendly dream destination. There are over 500 species of butterflies, 4,500 types of flowering plants and rare animals such as red panda, Himalayan bear, snow leopards and yacks.

The state of Sikkim received the Future Policy Award 2018 at a UN ceremony in Rome. It was better and more powerful than 51 other nominees from 25 different countries in terms of agro-ecology.

Some farmers struggled to cope with the change, but believe that their crops are much better than before. Indian Prime Minister Narenda Modi recognized the state of Sikkim for its contributions and offered further support for farmers in India.

There are also concerns regarding the use and effectiveness of bio-pesticides. The prices have gone up, and there are some diseases, too.

The state uses conventional crops from West Bengal to feed its people because farmers are still learning how to maximize their yields and follow government programs at the same time. This is a positive change, and it may take some time for farmers to get used to it.

Farmers have reported difficulties regarding low income. The productivity per capita among four crops have risen. The Sikkim mandarin orange marked a drop of 22% in the period between 2010-2011 to 2015-2016. However, the production of other fruits increased by 5%. Ginger and turmeric marked a rise of 2%, and cardamom had 8%. Roots and tubers rose by 6%.

The environment of this state suffered a lot under the conventional system of agriculture. It is a lot better now, and locals are much healthier.

Sikkim’s secretary of horticulture and cash crop development, Khorlo Bhutia, explains that the change had a huge impact. There are no chemicals in the air, water and food.

The state will try to pass the changes on to other countries. It’s a challenging process, but it’s definitely worth the effort.

India’s minister of agriculture and farmers’ welfare Radha Mohan Singh says this is a big moment for this country, adding that people really liked the idea of going organic.

The state offers organic agriculture modules for students in 4th and 5th grade. In the US, kids learn about Monsanto.

Monsanto’s products cause hormonal imbalances, cancer and many other health problems. These products are packed with dangerous toxins, and we are constantly exposed to them. The sad part comes when you realize that these products are approved for use. How many people have to die before the government changes that?

Sikkim is on a good way to improve even more, and hopefully, other countries will do that, too.

The Secret to Staying Healthy: Get The Lymphatic System Moving