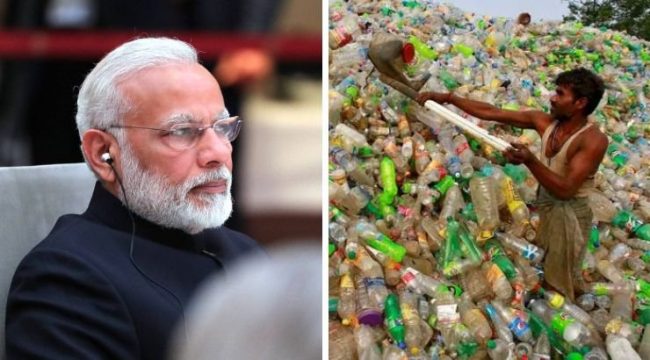 During opening remarks, he stated that it is time for the world to say goodbye to single-use plastic, and encouraged world leaders to follow India’s lead in terminating the use of plastic.

Modi said that India’s government has announced that it will put an end to single-use plastic in the coming years.

He added that the country “looks forward to making an effective contribution” while it gears up to take over the presidency of the CoP, the Convention’s highest decision-making body, for a two-year term.

During his Independence Day speech given on August 15, Modi urged citizens and government agencies to take the first step and free their country of single-use plastics.

The prime minister is leading efforts to eliminate single-use plastics by 2022, and he announced they will address six items, plastic bags, straws, cups, plates, small bottles, and some sachets, starting on October 2, the 150th anniversary of Mahatma Gandhi’s birth.

This move is expected to reduce India’s annual consumption of plastic by five percent, which is now estimated to be about 14 million tonnes.

Modi’s announcement came in a time when the world becomes aware of the threats of plastic pollution. Plastic waste is an acute problem in India, and the country is suffering under the unsightly and potentially toxic weight of single-use plastic.

It generates about 9.4 million tons annually, but there is no easy way to dispose of it. All wet and dry waste reaches the landfill, leading to another problem, higher and higher garbage dumps.

Delhi, the capital city, has three garbage dumps that have crossed their capacity and now the government is looking for a new site to start the fourth one.

As the Economic Times writes, the problem is an “all-too-familiar sight: an unofficial landfill spread out over an acre and rising several meters high, its base strewn with recently-discarded plastic cups, polybags, wrappers, packaging material and other detritus of our daily lives. This plastic pile, like other similar piles lying by our roadsides or accumulating in empty lots or choking up water bodies.”

India recycles about 60 percent of the plastic waste, but the rest of it makes its way back to the food chain, so Deepak Ballani, the director general of the All India Plastics Manufacturers Association, argues that the right approach is to strengthen the plastic waste management, the collection, and the disposal.

Modi added that the battle against climate change is a global one, so he called on world leaders to recognize people had to work together to effect change.

“We may introduce any number of frameworks but real change will always be powered by teamwork on the ground.”

Yet, after about a two-month-long confusion about the announcement of the Prime Minister and the ban of single-use plastic in India, the government clarified on October 1 that there will be no blanket ban on disposable plastic to combat pollution.

Union Environment Minister Prakash Javadekar explained that there is no upcoming ban on single-use plastic expected in India, as reported by Hindu Times.

At a press conference, he clarified that Modi did not say “ban” but rather said “goodbye” to single-use plastic, so starting on October 2, India “will begin an attempt to collect all that waste. Nearly 10,000 tonnes of plastic waste remains uncollected.”

Hindu Times also reported that several of India’s states already have laws dealing with single-use plastic on the books, but they aren’t enforced due to the costs for collecting and recycling plastic waste.

“We make a solemn pledge that by 2022, we shall eliminate all single-use plastic from our beautiful country. Our beloved Prime Minister Shri Modi Ji has envisioned a new India by 2022—an India of our dreams which shall be clean, poverty-free, corruption-free, terrorism-free, casteism-free … and most of all … which will be a global superpower. This India of our dreams shall also be single-use plastic-free.”

India argued for a resolution at the United Nations Environment Assembly in March to phase out single-use plastic worldwide by 2025.

At the conference in Kenya, environmental groups accused the US of blocking this and other ambitious global goals, resulting in a final statement including the far less concrete phrasing of “significantly reducing single-use plastic by 2030.”

The silver lining has been that many vendors and customers have said goodbye to disposables, and the demand for cloth and paper bags spiraled.

Yet, before imposing a blanket ban, the industry and the government are expected to come out with some alternatives. Until then, self impositions will surely lead to a small change.

What is crystal clear is that the world has announced the war against plastic.