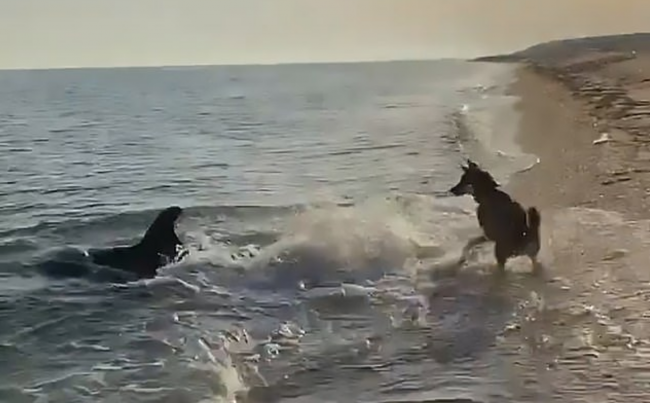 The animal world is fascinating, and it can teach us valuable lessons. Animal love is unconditional, and their friendship knows no boundaries, age, nor species! Dogs are our best friends, but, as it turns out, they are beloved by other animals as well! Anastasia Vinnikova recorded a video that has melted numerous hearts!

Namely, she was walking her medium-sized dog Patrick together with her daughter along Opuk beach along the coast of Crimea’s Black Sea, on Saturday, June 13.

While she was filming her dog, a dolphin appeared, and they witnessed a scene of pure joy and friendship! As she recorded it, a pod of nearby dolphins could be seen hunting nearby.

In the footage, Patrick can be seen running and frolicking in the water as the waves push the sea creature forward to the shore.

The dog touches the dolphin’s tail before backing off, and the dolphin swims back to the pod, before returning once more as Patrick scurries over to play with him again.

“Patrick has touched a dolphin but I still haven’t. In the clip, no one was hurt. The dolphins are swimming close to the shore to catch fish.”

The video of the joyous game of chase of the dolphin and the curious dog in the shallows of the water enchanted people online, and it quickly became viral.

People commented that they were “blessed” to see that wonderful moment, and many added that it brightened up their days.

Dolphins are among the most intelligent species on the planet, and studies indicate that dolphins display skills and sophistication previously attributed only to the human species.

They are often seen affectionately interacting with dogs and other animals. They are social and friendly, so they have been adored by people since time immemorial.