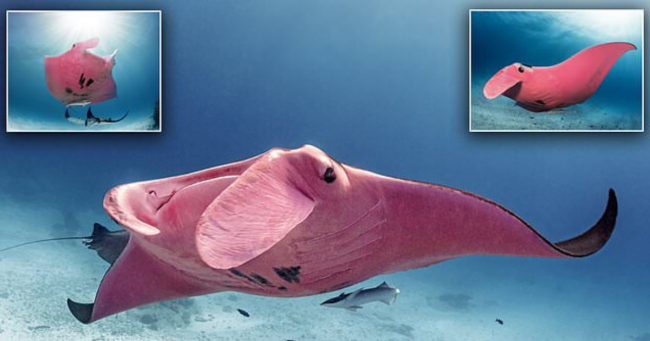 Life on land offers countless options for adventurous souls, but there is a whole new world underwater, full of excitement, waiting to be explored. Enjoying the spectacular scenery and abundance of underwater life is always an unforgettable experience.

Deep-sea adventures are thrilling, so the work done by underwater photographers never stops to amaze us!

Namely, Laine was lucky to spot the world’s only known pink manta ray, named Inspector Clouseau, after the detective from the Pink Panther films. The rare creature lives near Lady Elliot Island in the Great Barrier Reef, Australia, and was first spotted in 2015 by diving instructor Ryan Jeffery.

Inspector Clouseau has a wingspan of almost seven meters and weighs nearly two tonnes. Laine posted the photos on Instagram, and they quickly went viral.

“At first, I was very confused. When I went through my photos in my camera right after the encounter I was looking through my viewfinder and was thinking it’s weird that one of the mantas looks pink.

It was in the middle of a manta train with seven other mantas. I actually thought my strobes were playing up, making the manta look pink. That was until later that day, I saw on the board at Lady Elliot Island a photo of the pink manta.”

“It is very rare because I think there has only been around eight to 10 sightings since the first sighting in 2015. I felt amazed afterward but also felt like when I was at its eye level, I felt like he was smiling at me.

He was big and I got into a touch range but obviously didn’t touch, I was super close, about a meter at best. The whole encounter lasted for about 20 to 30 minutes and he was part of a mating manta train that was just circling around a cleaning station.”

Reef manta rays come in three different colors: black, white and a combination of the two, which is the most common, since it serves as camouflage. Their dark backs help them to blend with the gloomy water below, while the lighter underside serves to blend in with the sunlight from above.

Many of them thought that the pink belly of the manta ray was caused by a skin infection at first, but the University of Queensland’s Project Manta maintains that “the coloration is just an unusual and unique expression of the skin’s melanin.”

Yet, the numerous different theories about it remain.

“I have read multiple different answers, they have analyzed a sample of his skin and they have changed their theories many times and still don’t seem to know for sure.

I think the latest theory is that it’s some sort of a genetic mutation causing a pink of melanin to be expressed.”

Yet, before you start worrying that Clouseau might expose him to dangerous predators, you should know that Guy Stevens, co-founder of the United Kingdom’s Manta Trust, explained that due to their massive size, many of them survive decades in the wild:

“They are big when they are born, and they grow quite quickly in their first few years to make them large enough that only the biggest of marine predators prey on them.”