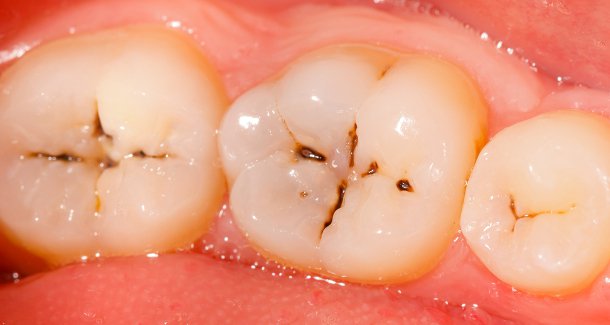 Dentists will not tell you this because big money is involved in the dental industry because of it. If everyone knew how easy it is to cure tooth decay, no one would go to the dentist. If you ask people whether caries and teeth can be healed naturally, 99% of the answers would be that that is impossible.

You were told that tooth decay is caused by diet with too much sugar in it. The American Dental Association says that tooth decay and cavities are formed when carbohydrates are stuck between the teeth, creating an acidic environment in which tooth’s enamel rots and thus decay is formed.

Part of their reason is correct (the one with the carbohydrate), but there are a number of holes in this theory. There are many documented cases of tribes and people who live outside the modern society. These people have a bunch of carbohydrates stuck in their teeth all the time and never brush or floss their teeth.

Weston Price (dentist in the early 20th century) traveled the world in search of such people, in order to examine their teeth and thoroughly document his findings. Bacteria also like to eat foods such as vegetables, meat, fruit and dairy products, but they have never been named as the cause of tooth decay and cavities.

In stark contrast to the current conventional “wisdom”, Dr. Weston Price wrote about a number of situations in his practice, even in the 1920’s and 1930‘s, when voids and cavities were cured without the need of drillings and fillings. Dr. Price discovered through a research that both cavities and tooth decay, caused by nutritional deficiency, are treated by itself.

Can the body heal itself?

If you think about the manner of an open mind, leaving all ideas of caries in the background, do not you think this makes any sense? Would not our body be able to treat cavities just like it cures a broken bone or a cut on your hand? Why would our teeth be different from a broken wrist?

In addition we will present a part of a woman’s story linked to caries and how to cure it.

“After reading an epic book by Doctor Price, “Nutrition and physical degeneration” a few years ago, my head was full of thoughts that caries can really be cured with proper nutrition over time. But believing in something intellectually and knowing how it works in practice are two very different things, right?

For this reason, I am very excited to tell you about a recent story about one of my children. You see, my oldest child has recently developed a cavity in his tooth, in his right maxillary lateral incisor. Caries was behind the right tooth on the gums. My husband noticed it one night, as a person who diligently protects teeth and brushing and flossing.

There definitely was a hole in the tooth, and it was not so little. We both agreed that caries should immediately be filled with seal.

I called the dentist immediately and arranged a meeting. Meanwhile, I began to insist for my son to take 3 butter-oil capsules every morning along with his normal, everyday spoonful of fermented cod liver oil.

With that big hole in the back of his incisors, he drank both oils. Dr. Price found that the tooth decay can be faster healed when these two therapeutic and nourishing oils are taken together.

The dentist meeting was within a few weeks, so I continued giving my child butter oil capsules every day. I also told my son that he really needed to get back to his breakfast of two slices of toast every morning with raw butter and honey instead of tahini (a thick paste that is made from ground sesame seeds, sesame oil) and honey, which he actually had for breakfast in the last few months.

My son loves raw butter and he just got out of his routine where he used to eat it every morning. Did this simple change in the breakfast have effect on the development of the cavity? Probably yes.

I did not change anything else in his diet. He did not stop to eat cereals and he still occasionally eats sugar through “junk food” that he gets in his school. He was still a teenager, after all. Try to remove grains and sugars from teenagers’ diet and you will get riot. Children need to learn some things the hard way.

I decided that I cannot protect my children from these things and keep them in a balloon – you can only learn to be wise and they will learn moderation themselves over time.

Anyway, back to the story of caries.

As it turned out, one day before the meeting with the dentist, we were informed that the dental treatment to be moved to another date because the dentist had to go out of town for family reasons. So the dates for my baby move for a couple of weeks, but all that time he continued to take the 3 capsules oil butter with a spoonful of fermented cod liver oil after breakfast of two slices of toast with butter and raw honey.

Last week prior to the dentist, I decided to take a peek into the cavity and see if everything was worse. About a month has passed and my husband was a little worried due to the fact that it was one of the top front teeth. I took a flashlight and my son leaned his head back and I looked, and looked, and looked!

There was no caries and no cavity

That’s right! No more holes anywhere. It is completely filled and was smooth as the tooth next to it. I told my husband, and he also looked at it. He was delighted when he saw that the holes were gone.

I will continue to take him to the dentist to make sure there is not tooth decay and to check whether the tooth cured all right.

The best news is that we have changed very little in order for my son’s tooth to be cured. My son has continued its normal, nutritious food at home with “omissions” in his diet, which usually occur during school and fun events.

We just we add butter oil in our regular diet along with fermented cod liver oil, and my son went back to the raw butter and tahini on his toast every morning.

Indeed, we took the son to the dentist to make a full review and to check that there are no voids and cavities in the mouth of my son. The tooth was there but the hole was gone. Diet can really cure tooth decay!

I hope that this story is encouraging enough for you to make some changes in your diet! Dr. Price’s research actually works in practice!

Sarah Pope writes The Healthy Home Economist blog. She is also a Nutrition Educator, Chapter Leader, and Board Member with the Weston A. Price Foundation, a non-profit organization dedicated to “restoring nutrient-dense foods to the American diet through education, research and activism.”

Visit The Healthy Home Economist Resources page for information on where to buy fermented cod liver oil and butter oil.

How Yoga Changes Your Body, Starting The Day You Begin