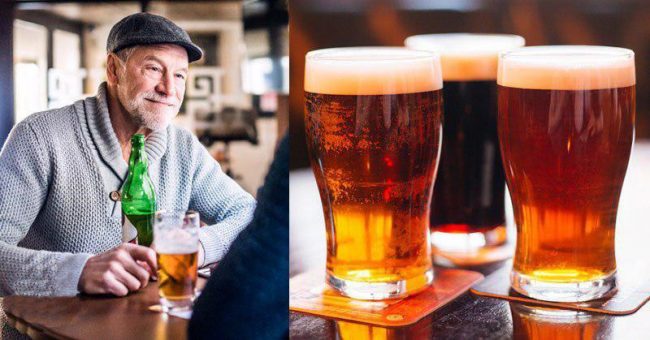 The ingenious idea of the authorities at Swansea’s Cefn Coed Hospital in Wales, United Kingdom to open a socializing pub helped their dementia patients in the best way.

The hospital has a special ward for them known as Derwen Ward, with a capacity to accommodate 20 men at a time. Before you jump into conclusions, you should know that this is not a regular pub, so there is no alcohol or fights inside.

Dementia is a progressive condition characterized by a persistent disorder of the mental process, loss of memory and daily functioning capacity, and usually affects people above the age of 60.

It has 7 stages, and it actually covers a set of conditions, like  Alzheimer’s disease, Parkinson’s disease, vascular dementia, frontotemporal dementia, dementia with Lewy bodies, etc.

Dementia leads to memory loss, and the most recent memories tend to be lost first. Sometimes, people only remember patterns of behavior they employed in the past. The progressive disappearance of memories can cause a condition called sundowning, or a late-day confusion that coincides with the fading of natural sunlight and increased shadows.

This condition is characterized by episodes of anxiety, panic, aggression, panic, restlessness and the inability to distinguish reality from dreams.

The patients of the Cefn Hospital start to display symptoms of this condition once it is evening, so the idea is to give them a chance to go out after work, just like they used to do when they were young.

This prevents anxious attacks and depression, and the old men are happy, relaxed, and grateful even the beer they get is non-alcoholic, and the darts are plastic.

The clinical lead Dawn Griffin explained why they had to set up the pub in the ward. Namely, some of the gentlemen get unsettled in the evenings, as they think they’ve finished their shift for the day and they are of the generation where they would go to the pub for a pint with their friends after work.

This gave them the idea to help them and get a pub on the ward, as a way to normalize things they were doing before they came into the hospital. The idea was birthed by Dawn and the ward manager, Kate Protheroe. The makeshift pub looks like any other pub and it has been a huge success for the hospital.

It does not serve alcohol and does not have metallic darts, in order to prevent any problems, as these men get a lot of medications so alcohol might interfere with them, and many of them have poor motor control skills.

Yet, they spend their time socializing and sharing memories and make new ones at the same time. Also, The Derwen Arms pub offers special dinners on certain days, like Valentine’s Day, when the elderly men can invite a partner to celebrate.

Dawn said that the reaction was huge, as these men started socializing well, and even used the opportunity to take their relatives and friends there for a pint when they visit.

There is money available for stock out of the ward’s rehabilitation budget, but the ward manager, staff,  and relatives of the patients also make donations, as does another ward on the hospital site that uses the pub.

Ms. Protheroe said that the Derwen Arms has had a huge impact on the service before as well, and this just improved the quality of care and patient engagement, while the pharmacological intervention has reduced.

She thanks all ward staff for embracing the improvement for the benefit of the patients, service managers for supporting their work, and all friends, families, and colleagues for their kind donations.

Additionally, the Alzheimer’s Society organization gives the following tips about sundowning to carers:

2 Apples, 1 Lemon And 1 Cup Of Oats, Prepare To Lose Size Without Any Control