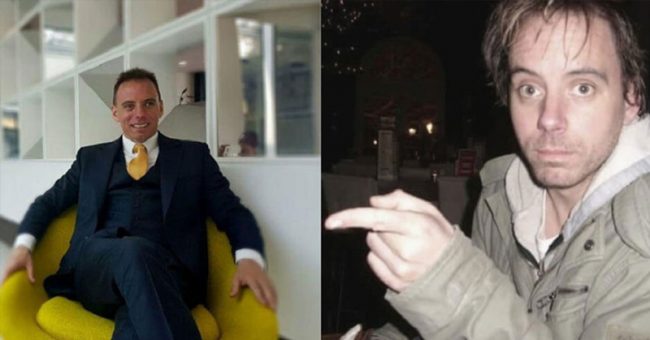 In his twenties, Drew Goodall was an aspiring actor appearing in films alongside Brad Pitt and Hugh Grant. He took minor roles in movies Snatch and About A Boy after finishing his degree in acting.

After a newspaper review for the play Marat/Sade criticized his acting and destroyed his confidence.

“I was so stressed about doing the show, I just gave up, I wasn’t having fun anymore.”

His acting career started failing, so he stopped getting the roles he wanted. Over time, things went down south quickly.

He eventually couldn’t afford to keep a roof over his head and was forced to live on the streets. For about six months in 2001, he slept in parks in Walham Green and Turnham Green, often being verbally abused and assaulted.

“I was attacked in the night in my sleep. Drunks would walk across the green and pounce on random homeless people. I slept in the props cupboard at The London Academy of Performing Arts. It was weird waking up to a Henry VIII costume next to you. If I slept late a class would come in and I’d have to hide and sneak out later.”

Many years later, he made a fabulous comeback. In 2012, he launched Sunshine Shoeshine, a shoe cleaning company, and today counts City banks as customers and donates thousands of pounds a year to charities. The Twickenham-based firm employs eight people working across over 50 businesses a week.

Sunshine Shoeshine, which rakes in a major £250,000 annually, and employs only homeless people.

Since he was in a dark hole once, he now struggles to pull as many out of it.

Drew spoke to BBC stories and explained how a guy who used to walk past him every day helped him get off the ground and onto his feet.

“At least in my experience, being homeless was something that happened to other people. It’s the person you see sleeping outside the tube station. It’s not something that you directly think, ‘This is gonna happen to me.’ There was a guy who used to walk past quite a lot.

He said, ‘There are people who work in the City of London and they clean shoes.’ And he said, ‘Maybe you could do that.’ And I thought, ‘Yeah, you know I could do that.’ I mean it’s some brushes and some polishes and it’s really not expensive to do.“

Using some of the money accrued from begging, he bought a brush and a tin of polish and headed into London’s financial district to shine shoes. His job was to clean shoes for busy workers who strode past his sleeping corner.

It wasn’t easy at first, and his practice was illegal in London, so he could have been arrested for breaking ‘hawking laws.’

However, one day, one of the regular customers of Drew offered him a working space in his office lobby. Drew stopped hiding from the police and earned a reasonable amount of money freely, so he could leave the streets.

Many years later, his hard work and determination made Sunshine Shoeshine a successful company. Nowadays, he has several locations around London with many employees on his payroll.

Yet, he hires homeless and disadvantaged people only, as he has never forgotten the horrors he lived through. He is now the helping hand these people need to get a chance to better their lives.

Alan, one of his beneficiaries, suffers from poor mental health and sight. He claims that the job Drew gave to him has been saving grace:

Alan still works hard and intends to seek higher heights soon. He lives a happy and fulfilled life, knowing that he is helping others to get on their feet.

If there were more people like him, the world would be a better place. He claims:

“There is no magic button for homelessness. It’s something that will always be there … (but) just giving someone some time, talking to them, that goes a long way to finding a solution to homelessness.”