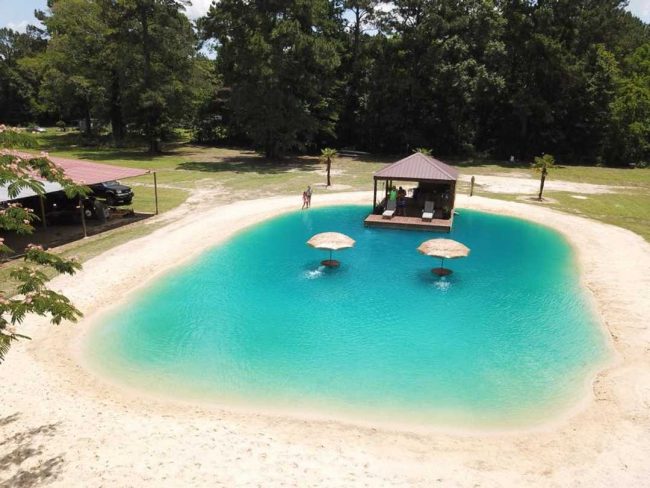 Eric White, 33, was once a homeless man, who got a million dollars-worth idea that completely changed his life. He is now the owner of Zydeco Construction, a Louisiana-based company that builds beaches in people’s backyards.

When he was 15, he was homeless for 8 months, and dropped out of school in the 9th grade, and had only a second-grade reading skill. He says that life was not easy for his when he was growing up, but he knew he was good in construction, and could really do something with it.

As a way to pay his bills, he started working in a local construction company, and afterward, he became interested in a job at Baton Rouge-based company that paid $12 hour.

He remembers starting as a helper for a local construction company, doing what he could do to make a dollar and doing what he could to feed my daughter. Afterward, he found a job working as a mechanic for a Ford dealership, but he felt it was not for him, so his father informed him about another construction company hiring in Baton Rouge that was paying $12 an hour and he took that opportunity.

His employer took him under his wing and taught him about the company. Within the first six months, White was managing the team. From there, he went to another company that offered more money, and then he started his own company, a pool business called Cool Pools.

Things got better, and after a while,  he sold it for over a million (dollars).

Next, his company Zydeco Construction was a huge success. It builds beach-like “swimming ponds” that are crystal blue and have 360 degrees of sand surrounding them, outfitted with accessories, like umbrellas, gazebos, outdoor kitchens, in-ground trampolines, volleyball nets, and more. The average pond his company builds costs about $20,000.

White claims that he had that idea for years.  He did much research and applied it to building these ponds. He has always dreamt of doing those different things, of making things happen.

He always wanted to find a solution to things. He says he would like to stay in the market for things that most companies don’t offer, especially custom requests. They cannot be done in a day, and they are a true labor of love, he claims, since every pond they make is a story on its own.

Moreover, his company is also in the business of drainage solutions and builds levees for homes that experience flooded backyards.

Therefore, this is not just a normal rag-to-riches tale, but a real story of hard work, that proves that if you have the idea, and dash towards it, you will achieve everything you have ever dreamed of.

Don’t you ever fear to follow your dreams, as it is the only way to satisfy your soul?

A Beekeeper Trained His Bees to Make Honey With Cannabis Resin

7 Signs He Is In Love With You, Even if He Doesn't Say it