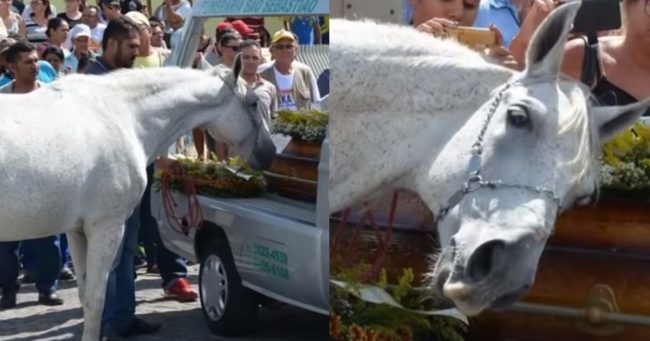 Do you know that horses have a special bond with their humans?

Researchers have found that horses and humans have developed a unique way to communicate with one another, a kind of third language, which is neither fully human nor fully equine.

What linguists call an “embodied language system” seems to have developed, and it is a way of communicating that’s reliant on touch, emotional connection and becoming attuned to physical movements. It is a symbiotic and dynamic process that recognizes horses as sensitive, decision-making beings.

Brain surgeon and horse trainer Dr. Allan Hamilton analyzes this horse-human bond and claims that the non-verbal nature of horses forces us to quiet our inner voice. He says that horses simply take a shortcut around our language, our inner voice, which is constantly distracting us from connecting with the world around us.

“When free of language, we can relate directly, viscerally with the horse. We do not need to understand how the horse knows what we want, we need to feel it. Horses teach us that what we access by feeling is just as valid as what we know by reasoning.”

Horses have been helping people since forever. The cute animals have been doing everything people ask them to. They carry us places, help people plow fields, and many other things.

However, things are completely different now, and horses aren’t used that much, but there are still people who ride horses in some parts of the world, and yes, they have a very special bond with their animals.

Wagner Lima was best friends with his best friends, Sereno. The horse loved his owner, too. Wagner and Sereno lived in Brazil and had a great time together. Sereno was part of Wagner’s life for eight years.

And then, the worst nightmare happened. Wagner was riding a motorcycle and suffered an accident. Unfortunately, he passed away shortly after the crash. Sereno didn’t know anything. He was waiting for his best friend. Patiently. Wagner never came, and the horse probably thought that his friend forgot about him.

Wagner’s family became aware of this, and they decided to show Sereno what actually happened. They brought the horse to the funeral, and Wagner’s brother, Wando, took Sereno to the church.

It was emotional and shocking at the same time. Sereno started making sad noises because he could sniff his friend inside the coffin. The truth hit him really hard. Sereno laid his head on the coffin. This was his “goodbye.” He knew that Wagner would never come back. He started hitting the ground.

The horse was part of the family, and Wagner was really happy. His brother is now taking care of the horse, and he will love Wagner’s horse as much as he did.

It's True: Being Near Water Really Does Make Us Happier

Actor Surprises 1,000 Children Of Fallen US Servicemen With The Vacation Of A Lifetime