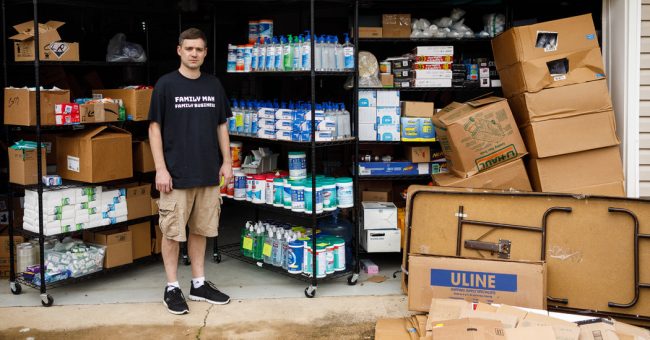 Coronavirus keeps hitting harder all around the world. There have been more than 2,000 confirmed cases in the United States so far, and the death toll climbed to 59, with 25 of the deaths associated with the Life Care Center in Kirkland, Washington.

While most are terrified of all that it takes from us daily, some among us see the virus outbreak as a chance to get more from life.

This was the case with the brothers Matt and Noah Colvin. When the first death of coronavirus was announced in the United States, they took their silver S.U.V and went to buy some hand sanitizer.

The drove around Chattanooga, Tenn., and kept cleaning out the shelves in supermarkets, including a Dollar Tree, a Walmart, a Staples, and a Home Depot.

In the next three days, Noah continued with it, driving 1,300 miles across Tennessee and into Kentucky, and purchasing thousands of bottles of hand sanitizer and packs of antibacterial wipes, mostly from “little hole-in-the-wall dollar stores in the backwoods.”

Matt stayed at home, where he prepared the place for the arrival of these goods and listed them on Amazon. He immediately sold out the 300 bottles of hand sanitizer he posted on Amazon, for between $8 and $70 each. As he said, “it was crazy money.”

The next day, Amazon withdrew all his items, and all listings for sanitizer, wipes and face masks, suspending many of the sellers and warning that they will lose their accounts if they keep running up prices.

eBay was even stricter and banned any U.S. sales of masks or sanitizer.

So, Mr.Colvin now has 17,700 bottles of the items left unsold, while the entire world craves for a hand sanitizer.

“It’s been a huge amount of whiplash. From being in a situation where what I’ve got coming and going could potentially put my family in a really good place financially to ‘What the heck am I going to do with all of this?’”

Thousands of other people like him have bought stockpiles of hand sanitizer and respirator masks, which were of vital importance in hospitals.

Due to price gouging to the virus outbreak, Amazon removed hundreds of thousands of listings and suspended thousands of accounts.

Companies keep discouraging people from hoarding products and jacking up prices, but many keep profiting from the public health crisis.

Retail arbitrage is a 21st-century career, a growing industry that found its place on sites like Amazon and eBay. These independent sellers post discounted or hard-to-find items in stores online and sell them around the world.

The pandemic offered them a perfect opportunity to make lots of money.

The strategy worked well at the beginning, and prices of wipes, masks, and sanitizers went higher than ever. People kept buying them, even at high prices.

Most of the prices dropped when Amazon took action.

Average daily prices from the beginning of the year through March for some of the most popular products returned in keyword searches on Amazon.com. 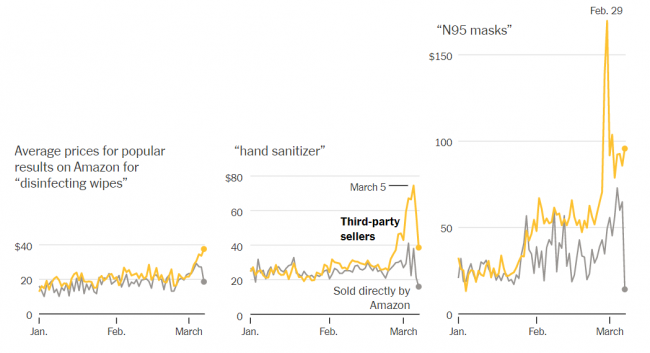 As customers and regulators expressed their criticism, the companies decided to take the needed measures. Amazon restricted sales of any coronavirus-related products from certain sellers.

In a statement, Amazon explained:

“Price gouging is a clear violation of our policies, unethical, and in some areas, illegal. In addition to terminating these third party accounts, we welcome the opportunity to work directly with state attorneys general to prosecute bad actors.”

Mr. Colvin is a former Air Force technical sergeant, and he started selling on Amazon in 2015.

He saw a chance to capitalize when the coronavirus spread. Namely, a nearby liquidation firm was selling 2,000 “pandemic packs,” leftovers from a defunct company, that consisted of 50 face masks, four small bottles of hand sanitizer and a thermometer each. 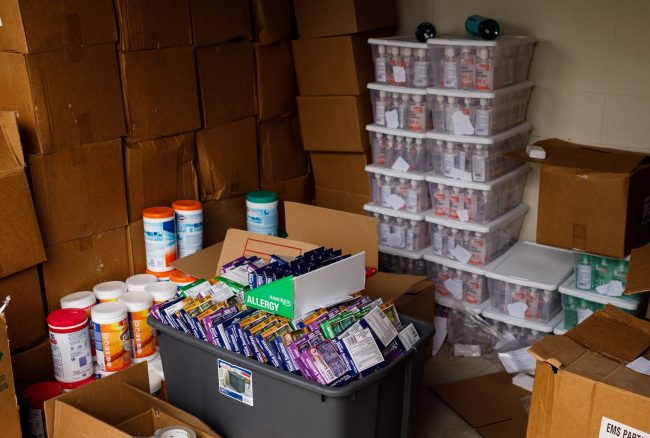 He quickly sold them all on eBay, pricing them from $40 to $50 each. So, as people started panicking, he and his brother decided to use it.

Numerous Amazon sellers did the same and made huge profits.

Elsewhere in the country, other Amazon sellers were doing the same, and now, they have a stockpile of medical supplies that are necessary during the pandemic.

The attorney general’s offices in California, Washington, and New York are all investigating price gouging related to the coronavirus.

In California, sellers are prohibited to increase prices by more than 10% after officials declare an emergency, while New York sellers are not allowed to charge an “unconscionably excessive price” during emergencies.

An official at the Washington attorney general’s office explained that they intend to apply the consumer-protection law to sue sellers and platforms, even if they were only selling to Washington residents.

Gov. Andrew Cuomo (D., N.Y.) addressed Purell and Mr. Amazon and Mr. eBay and warned that if they” continue the price gouging we will introduce our product which is superior to your product”. He alleged that as third-party retailers on Amazon and eBay are inflating the prices due to high demand, he intends to enlist the help of inmates to produce 100,000 gallons of hand sanitizer per week.

Cuomo added that the sanitizer will be “made available to residents free of charge, and distribution will be prioritized by the most impacted and high-risk communities, including the New Rochelle community, and state agencies.” 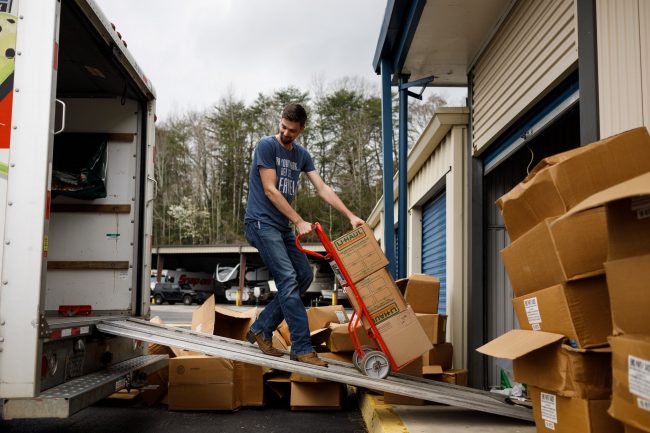 Mr. Colvin maintains that he was not price gouging, explaining that the price involves his labor, Amazon’s fees and about $10 in shipping.

He said that price-gouging laws are not suitable for modern times, as they were created “for Billy Bob’s gas station doubling the amount he charges for gas during a hurricane.” He added that he might have bought the item cheap, but it is not the same cost to deliver it to one’s door.

He added that he felt like he was fixing “inefficiencies in the marketplace”.

While some places were in desperate need of certain products, he simply helped to meet the demand:

“There’s a crushing overwhelming demand in certain cities right now. The Dollar General in the middle of nowhere outside of Lexington, Ky., doesn’t have that.”

If I can make a slight profit, that’s fine. But I’m not looking to be in a situation where I make the front page of the news for being that guy who hoarded 20,000 bottles of sanitizer that I’m selling for 20 times what they cost me.”

After they admitted their business strategy during coronavirus outbreak, numerous infuriated people criticized the brothers, claiming that they caused an unnecessary shortage of useful products.

Many people said they should be prosecuted for gouging, adding that they should suffer for their selfishness. Yet, others weren’t that harsh and offered a fair price for them to donate the bottles to people who need them.

Also, people praised Amazon and eBay for cracking down on profiteers, while others reminded that they have not taken the same measures to fight price gouging in such vital medical supplies as insulin and EpiPen injections.

After his story was published, Mr.Colvin stated that he intends to donate all the supplies.

Antidepressant Microbes In Soil: How Soil Makes You Happy