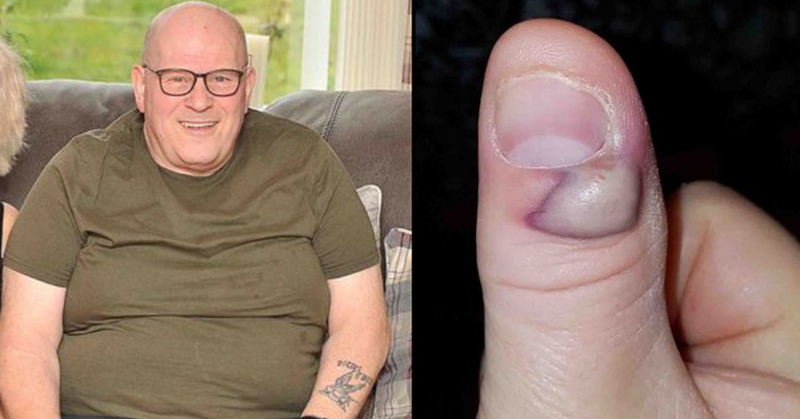 The habit of nail-biting seems harmless at times, but it can apparently lead to numerous complications, such as sepsis.  This was the case with 57-year-old grandfather, Ricky Kennedy of Scotland, who had a close call with sepsis after a life-long habit of nail-biting.

“I had bitten my nail like that hundreds of times before so to think it almost killed me is terrifying. I was in so much pain, I couldn’t move. I thought I was having a heart attack and I really did think I was going to die.”

While biting the nail, he accidentally damaged the nail bed, and this prompted the creation of a blister. In the end, he ended up in hospital, fighting for his life!

“If it wasn’t for Ghislaine [his 65-year-old wife] phoning an ambulance I would be dead.”

Similarly, Luke Hanoman, a 28-year-old warehouse operator and father of two, had the same habit, and chew down on the skin lining the side of the nail. Then, he started experiencing flu-like symptoms, like shaking, cold sweats and overheating. His fingers swelled up and he felt terrible pain, so after a week, his mother convinced him to go to the hospital.

His high temperature and red lines all over the body indicates a spreading infection, and after four days of treating him with antibiotics, he managed to fight it.

Habitual nail biters bite down the skin around the fingers, and the open wounds are a perfect environment for the development of infections, as the crevice between the nails and fingers is a breeding ground for bacteria like salmonella and E.coli.

According to Dr. Dana Stern, assistant clinical professor of Dermatology at the Mount Sinai Medical Center in New York City:

“The oral cavity is a virtual petri dish and [biting] can result in the transfer of yeast and bacteria that are normally found in the mouth but should not be on the nails and fingers.

This can consequently result in infections of the nail folds. Picture red, inflamed, swollen skin surrounding the nail. Conversely, putting your unwashed fingers in your mouth can transfer germs to your mouth, raising the risk of catching a cold or other illness.”

In the case of a severe bacterial infection, the body reacts by causing sepsis, which is life-threatening and can cause rapid tissue damage, organ failure, and if left untreated, even death. Some of the most common symptoms include extreme pain, increased breath rate, disorientation, shortness of breath, and/or clammy skin.

Very old and young people, as well as individuals with a weak immune system, are especially susceptible to developing sepsis. The risk is also increased after spending a lot of time in the hospital, due to the presence of various bacteria.

Yet, the story of Luke shows that one does not have to be in a hospital to develop sepsis. Apparently, nail biting is a dangerous habit that can have much more severe consequences than we ever imagined, so finding a way to stop it should be your priority.

Psychologists agree that if you bite your nails, it is a must to be fully aware of the situations when you do, understand the reason for it, and be willing to stop it for good.

According to Tania Elliott, a chief medical officer of the nationwide preventive health company EHE:

“Many people bite their nails as a response to stress or another trigger, and for whatever reason, your mind has been trained to think that biting your nails makes you feel better and makes that stress go away,” she said. “The goal here is to replace that ‘reward’ with what is really happening, and how gross it actually feels to bite your nails. Once your brain realizes this, the habit becomes easier to break.”

“Oftentimes nail-biting occurs out of boredom or when there is a lull in activity. However, if there is an anxiety or psychological component, it can also be helpful to collaborate with a psychiatrist, or therapist in order to identify the cause of the stressor. “

“While this may sound straightforward, many nail biters are not fully aware of when they are most prone to biting. For this reason, I have my patients keep a diary for several days in order to try to better understand behavioral patterns, triggers, and high-risk times and environments so that they can have a competing response in the ready.”