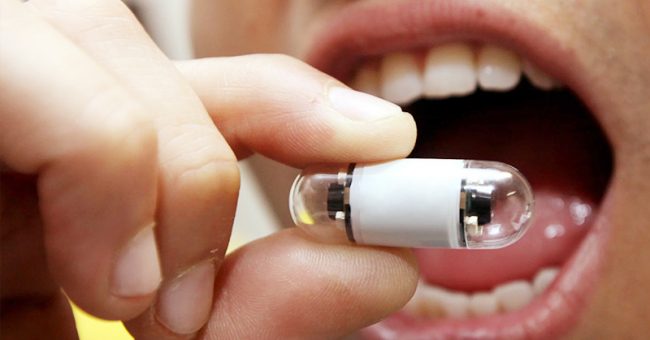 As technology advances, medicine follows suit. Scientists work hard to come up with new solutions to tackle common problems, and many of them have managed to revolutionize common procedures to a great extent.

With the wellbeing and comfort of the patient being their primary goal, scientists seek easier, safer, and less expensive ways to improve people’s health.

One of the most unpleasant and painful medical procedures is colonoscopy. It is long and uncomfortable, and doctors recommend their patients to follow a special diet, take oral laxatives, or avoid solid foods a few days before the test.

The procedure itself takes about 30-60 minutes, and the patient is regularly given medications to be relaxed during that procedure. It involves passing a long, flexible tube equipped with a video camera down the throat or through the rectum.

It is performed to indicate any abnormal growths or other issues exist that might explain the symptoms of the patient, such as a stomachache, or rectal bleeding.

Well, many people can now say goodbye to it! The alternative technology makes use of only one large capsule and many sensors placed on the abdomen, which are then fixed to a mobile belt.

Almost four years ago, it was accepted in Brazil, and now, it is increasingly used in other laboratories and diagnostic centers worldwide.

Loyola Medicine’s digestive health program is the first of its kind in Chicago to provide such a method.

The patient receives a tiny, vitamin-size wireless camera inside a capsule, instead of the insertion of the tube with a camera.

When he swallows it, the capsule travels through the gut, taking thousands of pictures and transmitting them to a data recorder wrapped around the waist of the patient.

Plus, it also analyzes parts of the bowel that the classic colonoscopy cannot, like the small intestine.

Here is how it works:

The patient is given laxatives and is told to avoid eating after lunch the day before. On the day of the procedure, he is allowed to drink water only.

For the morning appointment, the patient puts a belt with sensors, or sticky pad sensors are applied to the stomach or chest. On the belt around his waist, the technician attaches a data tracker.

The patient then swallows the capsule with some water. He is not allowed to drink anything for two hours and is advised to have a light snack after 4 hours.

Usually, after 8 hours, the patient returns to the hospital, and the technician checks if the capsule has got to the large bowel. In this case, the camera is supposed to be taking pictures on its way through and to be sending them to the data tracker.

The belt and sensors are taken off and the procedure is finished.

In case the capsule has not yet reached the large bowel, the patient is sent back home with the sensors and data recorder on until the batteries of the recorder are empty (usually it takes 12-14 hours). The next morning, he returns them to the hospital.

In the end, the doctor analyses the pictures downloaded from the data tracker. The disposable capsule will leave the body of the patient the next time he uses the bathroom.

After ingesting the capsule and until it is excreted, the patient is advised not to be near an MRI device or schedule an MRI examination.

One of the most common reasons why doctors recommend this procedure is the possibility of colorectal cancer, the second-leading cause of cancer deaths in men and third in women.

Mukund Venu, MD, the director of clinical operations and director of diagnostic testing for Loyola Medicine’s division of gastroenterology, says:

Other reasons include diagnosing celiac disease, Crohn’s disease, and other inflammatory bowel diseases, detecting the cause of gastrointestinal bleeding, inspecting the esophagus, and following up on other tests like X-rays.

Although colonoscopy is still regarded as the most common standard for diagnosing lower gastrointestinal diseases, it has its drawbacks.

Namely, it is limited to the colon only.

On the other hand, colonoscopies also allow for the concurrent treatment of intestinal polyps, while capsule endoscopies only provide passive visual information.

Overall, capsule endoscopy is more comfortable and less painful than a traditional colonoscopy.

Therefore, it is up to the doctor to choose between the two methods and decide on the matter. While colonoscopies are still accepted as the gold standard, capsule endoscopy is surely an appreciated alternative for both, the doctors and their patients.

“The potential gains that capsule endoscopy offers with regard to safety and patient comfort are unlikely to disappear, while cost advantages and effectiveness will likely improve over time.

In as little as a generation from now, patients may look back to the days of dreaded but routine colonoscopy screening with sympathy for the millions of healthy individuals who had to undergo so uncomfortable a procedure.”