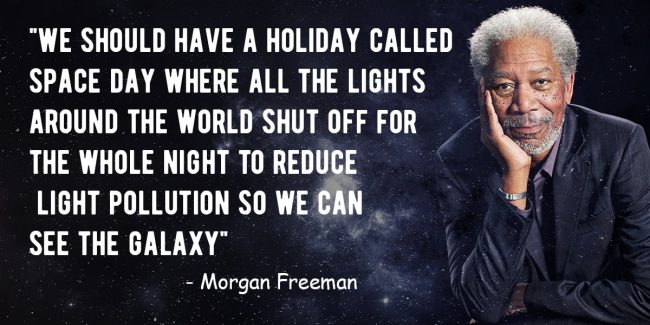 I do not have to ask if you like Morgan Freeman, as I don’t know a person who doesn’t. We can discuss in which films you liked him the most, as this Academy-award winning actor has left a mark with almost every film in his career.

He is ruling Hollywood, and films like Million Dollar Baby, Seven, and Shawshank Redemption have conquered the hearts of the audience, old and young.

Freeman is an actor, director, producer, and voice-over narrator, and has starred in dozens of films and garnered a lot of honors and awards, including lifetime achievement awards from both the Golden Globes’ Hollywood Foreign Press and the Screen Actors’ Guild.

Yet, he was not so happy all his life. He was born in a poor family, in the Jim Crow era South, and his black skin was like a curse in the time when racism was rampant.

He was the youngest of five children born to a barber and a schoolteacher. He has lived on the street and worked some undesirable jobs before succeeding as an actor.

From there, it was far from an obvious path towards delivering an Oscar-nominated performance as Nelson Mandela in the 2009 film Invictus.

Yet, he was determined to succeed and did it. So, Freeman knows a thing or two about defying the odds, belief, and perseverance. He has gone from a life of misery to a life of glory, and his wisdom is probably because he has seen it all.

In 2016, he was recognized as an integral part of the American culture – an American icon and was bestowed the National Medal of Arts by President Barack Obama.

Here are 15 powerful quotes by Morgan Freeman that will make you see things in life from a different perspective:

1.  “Learning how to be still, to really be still and let life happen – that stillness becomes a radiance.”

3. “I once heard a wise man say there are no perfect men. Only perfect intentions.”

4. “Was I always going to be here? No, I was not. I was going to be homeless at one time, a taxi driver, truck driver, or any kind of job that would get me a crust of bread. You never know what’s going to happen.”

6. Insanity is coasting through life in a miserable existence when you have a caged lion locked inside and the key to release it.”

7. “Challenge yourself; it’s the only path which leads to growth.”

9. “I knew at an early age I wanted to act. Acting was always easy for me. I don’t believe in predestination, but I do believe that once you get where ever it is you are going, that is where you were going to be.”

10. “When you have made your choice, it is providence that is your guide. Good, bad, or indifferent. Your fate lies in that.”

11. “Don’t be different just for different’s sake. If you see it differently, function that way. Follow your own muse, always.”

12. “I always tell my kids if you lay down, people will step over you. But if you keep scrambling, if you keep going, someone will always, always give you a hand. Always. But you gotta keep dancing, you gotta keep your feet moving.”

14. “Kindness in thinking or giving, creates profoundness and happiness. Kindness in saying creates an everlasting love”

120,000 Ribbons Hover Where The Berlin Wall Once Stood To Mark The 30-Year Anniversary Of Its Fall