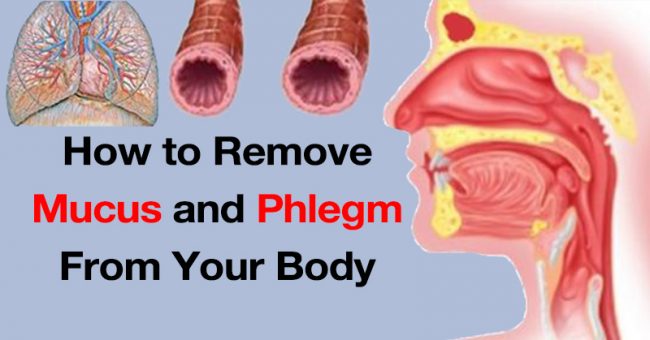 Mucus buildups make you feel as if there’s something stuck in your throat. You feel an urge to clear your throat, and it’s really frustrating. This issue is usually caused by infections in the upper respiratory tract, but mucus buildups may be triggered by allergies, asthma, and heartburn.

Coughing doesn’t work all the tie, and there are some natural methods you should try. These include mullein tea, steam inhalation, raw honey and natural salt rinse.

The role of mucus

Mucus lines the respiratory and digestive tract in order to protect the system. Mucus prevents infections, and keeps bacteria and viruses away from the body. In other words, having mucus in your throat is a normal thing. The real problem occurs when mucus becomes thick and has unusual color, such as dark yellow, green and brown.

The production of mucus may be affected by heartburn or acid reflux. Stomach acids go through the weak lower esophaegal sphincter, giving you a burning sensation. The throat becomes irritated, and you feel the “lump” in your throat.

This triggers the production of mucus, giving you cold-like symptoms, such as cough, post-nasal drip, sinus issues and sore throat. This problem goes undiagnosed mostly because it has the same symptoms as common colds and allergies.

The production of mucus may be increased by allergens. Pollen, dust, mites, animal dander and mold irritate your throat, and your body produces more mucus. Asthma is manifested through coughing and wheezing, but sufferers may also deal with excessive production of mucus.

In cases of bacterial and viral infections, the body produces excess mucus in order to trap the microorganisms. Sinusitis is a condition in which sinuses become inflamed and swollen. This infection also causes post-nasal drip and thick, dark mucus.

You can use a few simple and natural remedies to clear your throat.

Gargle salt water to eliminate throat mucus. Add half a teaspoon or a teaspoon of natural salt in a glass of warm water. Add a pinch of baking soda for optimal results. Gargle the solution several times a day.

Add a few drops of the oils to your hot steamy shower or your essential oil diffuser.

Ginger has strong anti-inflammatory effect. A study released in the Journal of Ethnopharmacology found that hot ginger tea relieves respiratory infections. Steep a piece of ginger (1 inch) in a cup of boiling water. Steep for a few minutes, and drink your ginger tea 2-3 times a day. Add lemon juice, honey and cayenne to strengthen its effect.

Natural pollen, royal jelly and propolis give honey its incredible power. Honey reduces coughing. Canadian researchers found that a single dose of honey reduces the production of mucus and coughing. Take a tablespoon of honey 2-3 times a day until your condition improves.

Drink a lot of water and herbal teas to reduce the production of mucus. Mullein leaf tea works best, and you can also use chamomile, ginger and turmeric to soothe your inflammation.

Scientists Found an Edible Mushroom That Eats Plastic, and It Could Clean Our Landfills

Scientists Explain What Happens To Your Body When You Walk Barefoot