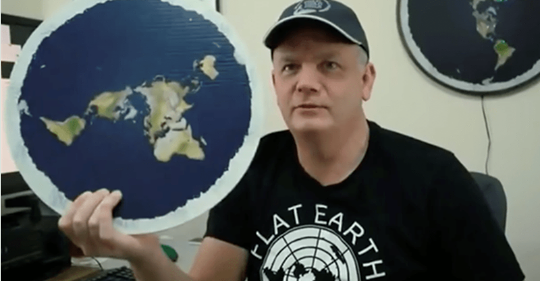 The Flat Earth Society will go an extra mile to blast science, and sometimes they even pay thousands of dollars to prove “ordinary people” wrong.

Agreeing on one simple theory is impossible. People like to discuss numerous topics. Is pineapple a good topping for your pizza? Is this leader making the right decisions? The Earth is round. Do you agree on this one? There are so many topics, and the discussions are endless.

Some people believe that the Earth is flat. Have you ever heard of the Flat Earth Theory?

This may sound like a big joke to you, but some people really say that the Earth is round. Flat Earthers do their best to prove others wrong. The Flat Earth Society has a few main points to rely on.

Flat Earthers rely on sight. We don’t see a curve and it doesn’t feel like we live on a sphere. That’s how they see things. If you can’t see a curve, why would you believe those who say the Earth is round.

What about satellite pictures? They clipped pictures of our planet together and edited the final product. Some of them even dare to say that NASA photoshopped the round image we’ve been seeing for years.

Flat Earthers believe that space trips are faked. During the “space race,” people tried too hard to beat each other into space. Instead of doing something, they faked the whole thing in movie studios. Some Flat Earthers believe we launched rockets into the sky, but they are convinced that the rockets were empty.

How do Flat Earthers explain the planet’s rotation around the sun? Flat Earthers have a different map. They believe that the earth is like a pancake. According to them, the north pole is in the center and Antarctica is an icy wall surrounding the outer edges of the “pancake.”

We all believe the earth is a globe and the north pole is at the top and Antarctica is at the bottom. Flat Earthers say the sun circles around the Earth like ice skaters circle their rinks.

Have you ever watched Behind the Curve? It revolves around popular Flat Earth Theory influencers who try to prove the earth is flat. Bob Knodel, a Flat Earth YouTube channel host, spent $20,000 on a gyroscope to prove his theory. Well, instead of confirming the Flat Earth Theory, Knodel debunked it.

A gyroscope stays in one position despite the rotation of the Earth. As the planet moves, the gyroscope leans off-axis, showing its curvature. “When we turned on that gyroscope we found that we were picking up a drift,” Knodel said. “A 15 degree per hour drift.” That’s exactly what a gyroscope does were the planet a globe.

“Now, obviously we were taken aback by that -- ‘Wow, that’s kind of a problem.’ We obviously were not willing to accept that, and so we started looking for easy to disprove it was actually registering the motion of the Earth.”

“We don’t want to blow this, you know?” Knodel told another Flat Earther. “When you’ve got $20,000 in this freaking gyro. If we dumped what we found right now, it would be bad? It would be bad. What I just told you was confidential.”

Knodel didn’t accept the failure and will stick to his Flat Earth theory. “We obviously were not willing to accept that, and so we started looking for ways to disprove it was actually registering the motion of the earth.”

Flat Earthers chose to close their eyes before facts. But, their willingness to say the earth is flat actually made people stick to the facts that have been proven on so many occasions. So, challenging science is not really wise. The earth is round and that’s the only truth we know. Even Flat Earthers proved it!