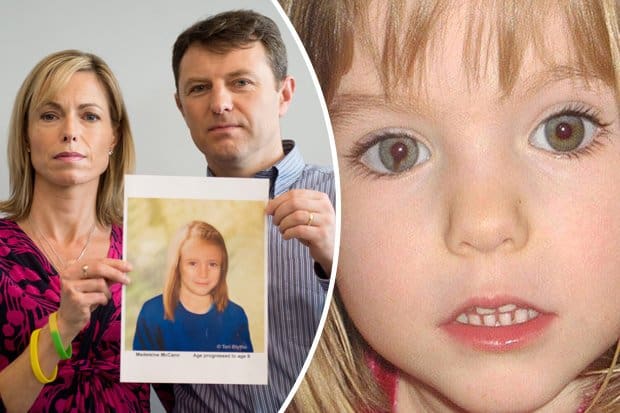 Unfortunately, too many children around the world end up being missed or kidnapped every year. Yet, one of the most disturbing ones in the last several years is the case of Madeleine McCann, which has still not been resolved.

Back in May 2017, the girl was on a family vacation in Portugal, with her parents. They were staying at Praia da Luz, a resort in the Algarve region. The vacation consisted of many family members and friends.

The young children were safely asleep in the ground floor room, while the parents were at a nearby restaurant, from where they were able to go and check on the kids. On one of these checks, Madeleine’s mother noticed that she was missing.

She was no longer in her bed, while her younger siblings slept soundly beside her.

And the case was never solved. The mystery surrounding it keeps sparking interest, and numerous theories do not stop arising. Some claim she was kidnapped, others that her accidental death was covered up. Many believe she was sold to an anonymous pedophile ring.

Interested people in the case dug a bit deeper and revealed a lot of shady activity and questionable responses by her family, as well as their connections to very sinister people.

As the case has been reopened 11 years later, here are some strange facts about the case of the missing girl, compiled in a video by a YouTube account Fully Sourced:

Some claim that her parents know how and when she died. They believe that she died by falling.

‘When we speak, the process of constructing sentences in our mind involves deciding which tense to use, which words to select from our vocabulary, and what order to put them in. This mental process all happens in a fraction of a second. If somebody is constructing sentences from their experiential memory, ie, recalling something real that actually happened to them, the process of word selection follows particular patterns and characteristics, which can be easily identified by a trained statement analyst.

If however a person is fabricating and being untruthful when they speak, the natural cognitive process of choosing and ordering words is interrupted, because the mind must censor and insert artificial information in a very short time period. This means the language of somebody who is fabricating is characteristically different and can be picked up.’

He has analyzed in depth a 2011 interview of Kate and Gerry McCann, and he recognized signs of deception. He claims Madeleine died in the apartment, after being drugged, and she has sustained injuries incompatible with living by falling.

The story told by her parents kept changing over time. Kate said that the abductor jemmied the gliders open, went in through the window, and kidnapped her daughter. Yet, there were no signs on a break-in and nobody else’s DNA was found at the scene. Then, they revealed that the kidnapper walked in and out of the front door with Madeline.

A false eye witness account reported seeing a man carrying a child that resembled Maddie and was wearing the same pajamas.

Later, they tried to pin the kidnapping on a hotel staff member, and after a while, blamed it on the maintenance man. Yet, the men were both cleared later, and the eyewitness account was believed to be fraudulent.

Sometime later, a Scotland Yard detective maintained that a man matching the description given by McCann’s friend, Jane Tanner, was carrying his daughter home that night. He released a photo of a dark-haired man standing in the same pose. Yet, his statement was proved to be fake.

When asked about what happened on the 3rd of May, the statements of Jane, Gerry, and Kate don’t add up. Jane and Kate said that the girl was playing tennis with them, but the details of Jane’s story do not match Kate’s. Three days later, the girl’s parents released a photo of her playing tennis on the day.

However, the hotel staff does not recall seeing Madeleine playing tennis or by the pool and added that she was wearing those clothes on the 1st of May. A timesheet confirmed that this was true.

The further inspection discovered that the EXIF data of the photo had been changed, so it was impossible to prove what day the picture was taken.

After Madeleine was reported missing, the phones of Gerry McCann’s and Robert Murat were switched off for 32 hours; from 3:44 PM on the 2nd of May, to 11:40 PM on the 3rd of May.

Murat arrived in Portugal early on Tuesday, the 1st of May.

Employees at the hotel remembered hearing a little girl cry and scream on the Wednesday night, the 2nd of May. The mother confirmed it in an interview and said she ignored the cries. She added that that was the first time the kidnapper made contact with Madeleine.

In the following years, Murat sued several newspapers for claiming he was involved in the crime and linked him to a pedophile ring. In 2008, he received over $790,000 in damages and an apology from 11 British newspapers.

Body fluid and hair were found in Murat’s villa but considered insufficient evidence to continue investigations.

Police K9 units found the scent of death in the McCann’s hotel room and bloodstains that were later confirmed to be from Madeleine. This evidence was again ruled as insufficient.

Two weeks after her disappearance, Madeleine’s parents rented a car. The police K9 units again found the scent of death in the car, and DNA tests confirmed that bloodstains found in the car were of Madeleine. The rental was paid by Robert Murat, under the name of his soon to be ex-wife.

The parents also have the exact same pajamas of the girl, they claim she wore when she was kidnapped. They held it during a press conference. They explained that they were from her younger sister, but they were too big to fit a 1-year-old!

Also, Gerry’s brother later confirmed that those pajamas were Madeleine’s!

The three-year-old girl vanished from a Portuguese holiday apartment 13 years ago. All these years, a large, costly police operation has taken place across much of Europe.

Considering this, many believe that those 12 million pounds were not spent to solve the mystery, but to hide the truth, and a lot of authorities doubt the official story.

John Stalker, Former Deputy Chief Constable says that he suspects that we’re not told the truth. and his gut instinct tells him that “some big secret is being covered up.”

Colin Sutton, Former MET Murder DCI, said that someone very senior told him that “Grange would be very narrowly focused, away from the suspicion of any wrongdoing by the part of the McCanns.”

“I have direct information that more than one of those British diplomatic staff found the McCanns less than convincing and their stories very inconsistent. Guilty as hell.”

Wendy Murphy, Former US Prosecutor, says that he” is not buying it” and asks:

“When do you hire the Nation’s biggest defense attorney PR firms and refuse to answer questions?”

Last year, the Netflix documentary, The Disappearance of Madeleine McCann renewed the interest in Maddie’s disappearance.

The latest development now focuses on a German sex offender, currently in jail, who is believed to have killed her, so German prosecutors are treating it as a murder inquiry.

Her parents just claim that all they have ever wanted is to find their daughter.

Yet, all these theories are still not proven. Too many questions. No or strange answers.

Will the truth be ever revealed?