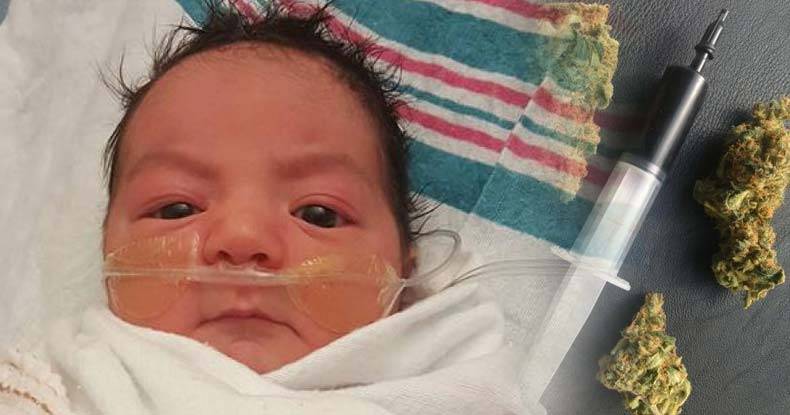 Amylea, a sweet baby girl, was born in December, in Aurora, CO. Unfortunately, when her parents,  Nicole and Ernie Nunez, brought their baby at home, things went seriously bad.

Nicole explains: “About a day after we went home from delivery is when she had her first seizure. She has a rare form of epilepsy. They don’t know exactly the type.”

These parents are desperately seeking a way to save the life of their baby for 2 months and try to treat her specific condition. Since the doctors In Albuquerque, New Mexico, were not able to detect the cause and thus could not provide a proper treatment, the Nunez family decided to go to Colorado.

Nowadays, the mother stays at the hospital in Aurora, while Ernie travels all the time, as he also needs to take care of their other children at home.

In order to stop the seizures, doctors in the Aurora hospital continued to prescribe the same drug cocktail. Yet, it is a fact that these medications provide severe adverse effects as well.

“The medication she’s on is hard for her liver, and so we’re trying to do something different that’s not so bad on her body.”

They heard about the impressive effects of the treatment with Charlotte’s Web, a strain of cannabis, and this made them hope that there is a cure for their daughter.

The name of Charlotte’s Web was given after a young girl, Charlotte Figi, who was treated with it. Namely, the girl had her first seizure when she had only three months, and in the following several months, her seizures were frequent and lasted from 2-4 hours. Due to all this, the girl was constantly hospitalized.  Yet, her parents discovered this cannabis strain and managed to save their little girl. Since then, numerous other children were treated with the same plant.

“I sat for a good three weeks fighting with the doctors and trying to talk them into giving me the okay. I’ve been working with the case study team and the neurology team here at children’s and I’m hopeful this will work.”

Finally, the doctors of her daughter decided to treat Amylea with cannabis oil.

Nicole said: “For us to get the approval for us to administer it while she in the NICU while she’s a patient…it’s kind of like a miracle. Because they were completely against it saying, ‘No you can’t do it, you have to wait until she’s an out-patient.”

However, the doctors agreed to use the cannabis oil, but the parents needed to administer it to her. The girl received it in small amounts, but her nurses noticed great improvements. The family claims that their daughter is the youngest patient who has ever received cannabis oil in a hospital.

This case is evidence that the cannabis is a viable medical option, and it being classified as a Schedule 1 drug by the federal government is absurd. This miraculous plant has been shown to treat epilepsy, cancer, and numerous other health issues.

A study, whose findings were reported by The Free Thought Project, found that this oil effectively treats intractable epilepsy. The study involved 261 patients, and even the frequency of seizures was reduced in 45% of them.

Additionally, 9% were seizure-free at three months. Even after the end of the study, some children continued to experience the benefits of the treatment, months and even a year afterward.

Therefore, it is up to us to raise the awareness of the general public about the reality and the positive outcome of the treatments with cannabis oil, and do all we can to change things, as apparently, we have the cure for the deadliest illnesses of the modern era, and it has been banned due to immoral reasons.

Doctors Have No Explanation: Mix Cinnamon And Honey And Treat Arthritis, Gallbladder, Cholesterol And 10 Other Diseases

These Diseases Are All Caused by Microwave Ovens, and You’ve Probably Ignored Them!