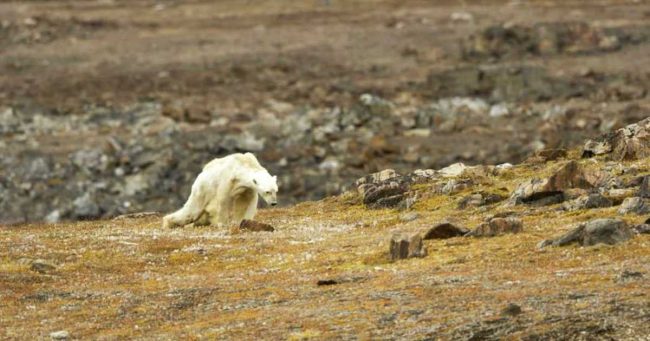 When we hear or read about the disastrous effects of climate change on our environment and wildlife, it seems remote and abstract, but it quickly becomes real when we see what it does on animals like polar bears.

There is no proof that polar bears are starving due to climate change but plenty of evidence suggests that warming is causing sea ice to dwindle, and it is their main hunting ground.

According to a 2015 study, the polar bear population in the southern Beaufort Sea had reduced 40% due to the loss of sea ice, and another 2017 study conducted by the US Geological Survey and the University of Wyoming showed that bears are also spending more energy walking across a “treadmill” of drifting sea ice caused by warming, so they need more food to compensate.

Paul Nicklen is a biologist who grew up in Canada’s far north and has eventually become a wildlife photographer.  He is no stranger to bears and has seen more than 3,000 bears in the wild.

However, when he and filmmakers from conservation group Sea Legacy arrived on Somerset Island, near the larger Baffin Island, in the Canadian Arctic, he witnessed one of the most gut-wrenching sights in his life.

They saw a starving polar bear on its deathbed, and they stood there crying, with tears rolling down their cheeks as they were filming it.  The white hair of the bear limply covered its thin, bony frame, and it dragged one of the back legs as it walked, probably as a result of muscle atrophy.

The polar bear was searching for food, and it slowly rummaged through a nearby trashcan used seasonally by Inuit fishers. When it found nothing, it resignedly collapsed back down onto the ground.

Even though the video is painful to watch, Nicklen decided to share it in order to show other people what it looks like when scientists say that bears are going extinct, and they are going to starve to death.

Photographer Captures One In A Million Photo, Doesn’t Realize It Until He Gets Home