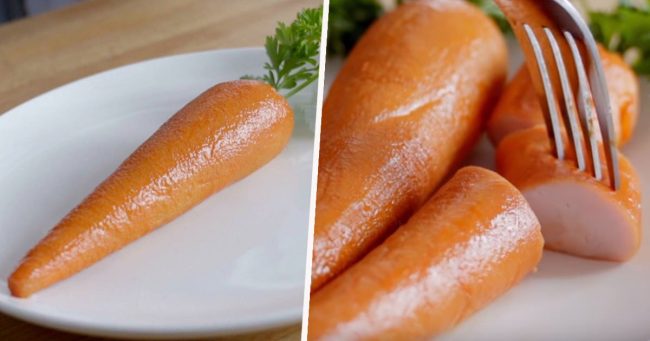 Some say vegans have gone a little too far, and the resistance grows bigger with every day that goes by. Meat-lovers strike again, and this time their latest invention will sure annoy vegans.

Arby’s created the Marrot which is basically a carrot made of meat. What’s the main idea? Well, if you can eat plant-based meat substitutes, you can have things the other way round, right? Arby’s wasn’t asked to make the Marrot, but here it is. We believe that Bugs Bunny would approve its appearance, because it looks like a perfectly shaped bright orange carrots.

The Marrot is actually shaped turkey breast which was boiled and rolled in dried carrot juice powder. Roasting it is the last step of the process. To get the classic green stalk, Arby’s use a spring of parsley.

It seems like the Marrot is the first in a series of “Meat Vegetables.” The fast food chain likes to call them “Megetables.”

Jim Taylor, Chief Marketing Officer for Arby’s explains that plant-based meats are the latest move in making vegetables look like a tasty meal. Vegetables should be part of our daily menu, but most Americans don’t eat their veggies. If vegans can have meat made from vegetables, then meat-lovers can have vegetables made out of meat.

Jim consulted Neville Craw, Vice President of Culinary Innovation & Brand Executive Chef for Arby’s, to get the best help in the process. His vision became reality, and it looks really fine.

Neville confirmed that Jim called him, saying it was time for them to change the paradigm of turning veggies into meat dishes. They went through a lot of ideas, and the Marrot is the final product of their creativity.

The Marrot is the first product of its kind. The food industry has never had anything like this, and that’s what makes the whole project even more interesting. Neville added that their team is always interested in bringing innovations to the market.

Jim and Neville try really hard to keep their project alive, and there’s more coming our way. They haven’t stopped working for a minute!

Jim revealed that they will keep releasing innovations, noting that the space of meat craft is still unexplored. Megetables can be both delicious and healthy, and Jim likes how things worked out for his team.

Arby’s supports culinary innovation. The team tests more than 1,000 menu items every year, and they are all-in when it comes to giving their guests the best quality meats.

Nobody asked for the Marrot, but we are pleasantly surprised by this invention. We can’t even imagine the next megetable. What’s coming next?

Megetables can turn into a trend now, and we believe there are so many people who would gladly try the Marrot. It looks tasty and it’s made of meat! What else could you ask for? Of course, you have to be a meat-lover first.

10 Reasons to Start Drinking Warm Water With Lemon Every Morning

5 Techniques to Quiet Your Mind