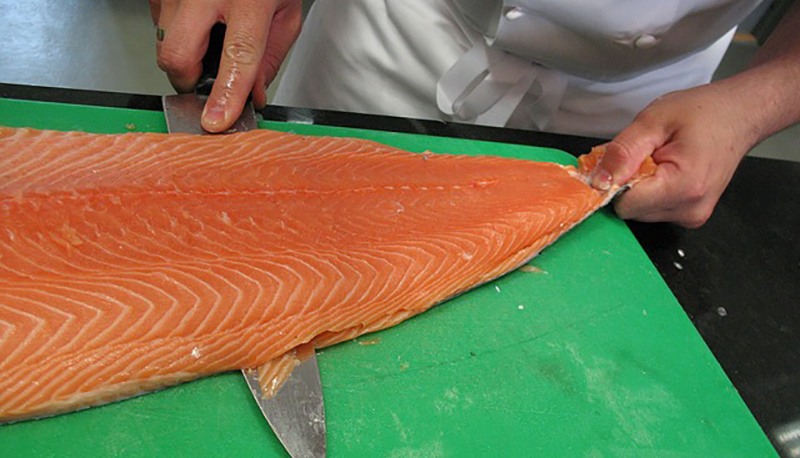 Nowadays, the fish business is booming, but the fisheries face numerous serious problems, like overfishing, chemical pollution and genetic mutation from toxic exposures.

Moreover, in reality, there is little difference between land-based feedlots and water-based ones in terms of environmental pollution. The documentary “Fillet-Oh-Fish” by Nicolas Daniel, criticizes the fish industry and reveals important facts about fish farms and factories.

It starts off in Norway, and Kurt Oddekalv, a respected Norwegian environmental activist, claims that salmon farming is a disaster both for the environment and for human health. Namely, the entire sea floor is destroyed by waste that is 15 meters high, teeming with bacteria, drugs, and pesticides, that contaminate the fish in the farms.

He also claims that consumers are unaware and the sales of fish diseases with sea lice, Pancreas Disease(PD) and Infectious Salmon Anemia Virus (ISA) remain unabated. Farmed salmon is also treated with dangerous pesticides to stave off disease-causing pests, one of which is known to have neurotoxic effects.

These claims have been confirmed by toxicology researcher Jerome Ruzzin, who reviewed numerous different food groups sold in Norway for toxins, and found that farmed salmon contains the greatest amount of toxins of them all.

The pesticides affect the DNA of fish as well, leading to genetic mutations, like their flesh which is “brittle” and breaks apart when bent.

Additionally, the nutritional content is extremely abnormal. While wild salmon contains about 5 to 7 percent fat, the farmed variety can contain from 14.5 to 34 percent.

Researchers have found that the largest source of toxins is not pesticides or antibiotics, but the dry pellet food, whose main ingredient is eel and fatty fish from the Baltic Sea.

The problem lies in the fact that the Baltic is highly polluted, and some of the fish used are high in pollutants, and they get incorporated into the feed pellets.

There’s a massive paper mill on the bank of the Baltic that generates toxic dioxins, and nine other industrialized countries surrounding the Baltic Sea dump their toxic waste into this closed body of water. Salmon, herring, and eel are prone to the negative effects of the pollutants as dioxins bind to fat.

“A study conducted at the University of New York at Albany found that dioxin levels in farm-raised salmon are 11 times higher than those in wild salmon.

Dioxins are one of the “dirty dozen,” says the World Health Organization (WHO) because they are highly toxic and are stored for a long time in the body. Their half-life in fat cells is seven to 11 years.  Dioxins impair the endocrine, immune, nervous and reproductive systems and are carcinogens.”

Yet, there is another issue which stems from the manufacturing process of the pellets.

Namely, the fatty fish is initially cooked, so the oil and protein meal are separated. The oil is rich in dioxins and PCBs, while the protein powder adds to the toxicity of the end product.

One of the best-kept secrets is the fact that manufacturers add an “antioxidant” called ethoxyquin to the protein powder. Monsanto developed this pesticide in the 1950s, but in this case, it is used to prevent the fats from oxidizing and going rancid.

The use of this chemical was never revealed to health authorities, and the EU strictly regulates ethoxyquin levels in fruits, vegetables, and meat.

The one and only study ever done on ethoxyquin and its effects on human health was a thesis by Victoria Bohne, Ph.D. a former researcher in Norway. She found that ethoxyquin can cross the blood-brain barrier, and may have carcinogenic effects, and these findings were the reason why she was pressured to leave her research job.

Furthermore, many believe there is a link between the secret use of this dangerous chemical in Norwegian fish farming, and the lack of scientific investigation into its effects, to the Norwegian Minister of Fisheries and Coastal Affairs, Lisbeth Berg-Hansen.

Namely, she is a major shareholder in a commercial salmon farm and has held many high-ranking positions within the fishing industry.

Additionally, according to Organic Lifestyle Magazine:

“We are not only looking at genetic modification, disease, hormones, antibiotics, filth, starvation, genetically modified feed, and inhumane treatment, we also color fish. Salmon have artificial coloring added to their feed that changes the color of their flesh. Farm raised salmon are not naturally pink. They are gray. Chemicals are added to their feed to cause their flesh to turn pink. So we are also ingesting those chemicals when we eat farm-raised salmon. “

The Rise of Panga

The documentary also asks questions about the low prices of panga and the effects of its regular consumption on children.

In the last fifty years, the consumption of fish in France has doubled and surpassed the use of chicken and beef. The high demand led to the constant import of fish from around the world, and the growing popularity of panga, a lesser known and less expensive fish. Being cheap, it has become a top seller in the school system.

Panga is part of the culinary tradition of southern Vietnam, and in the last two decades, it has become the major source of income for the region.

Therefore, it is farmed and grown twice to four times as fast compared to panga in the wild and is then harvested and processed by being washed in big vats filled with water and polyphosphates — chemical additives that ease its freezing and increases the weight by allowing the fish to soak up water.

Numerous panga farms raise the fish in highly polluted waters so they are plagued with disease. Hence, farmers add industrial quantities of drugs into the fish ponds, including antibiotics. This practice leads to drug resistance and these drugs absorbed into the fish’s tissues and into the environment.

Therefore, even we still consider fish to be one of the healthiest foods on the planet, we need to be extra careful when choosing the right type.

Nothing goes to waste anymore, and fish waste is washed and ground into a pulp, that is afterward used as pet food and prepared meals.

Fish manufacturers are not required to specify that their products contain fish pulp, so when buying a product, if the list of ingredients does not include fish fillet, it’s usually made with fish waste pulp.

One in three fish labels have also been found to be misleading or false, and farmed fish is advertised as wild, while inexpensive fish is labeled as a more expensive one.

The wild-caught salmon fillet nutrition profile makes it one of the world’s healthiest foods. High in a number of important vitamins and minerals, wild-caught salmon boasts many benefits for the entire body, largely thanks to its high content of omega-3 fatty acids.

Yet, even wild caught fish is too contaminated to eat regularly these days, as most major waterways are contaminated with chemicals heavy metals, and mercury.  Therefore, we recommend you to freely consume only the following: wild-caught Alaskan sockeye salmon, and smaller fish with short life cycles.

The wild-caught Alaskan sockeye salmon is always wild-caught and is not allowed to be farmed. Also, it has a short life cycle of about 3 years, so its exposure to mercury and other toxins is reduced. Moreover, it doesn’t feed on other fish.

Your second option includes smaller fish like sardines and anchovies, which are high in nutrients but are at a lower contamination risk.

“The tiny, inexpensive sardine is making it onto many lists of superfoods and for good reason. It packs more omega-3s (1,950 mg!) per 3-ounce serving than salmon, tuna or just about any other food; it’s also one of the very, very few foods that’s naturally high in vitamin D. Many fish in the herring family are commonly called sardines.”

You can also consume fish roe and herring, as they are rich in important phospholipids that nourish mitochondrial membranes.

The Exceptional Benefits Of Beetroot Make It An Almost Miracle Food