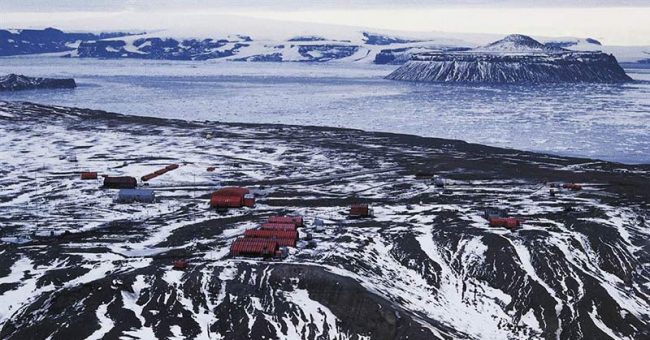 Over the past several decades, experts have been warning us that unless we do something to mitigate the destructive effects of climate change, it soon might be too late to reverse them.

A recent discovery has suggested that the climate of our southernmost continent has been changed much more dramatically than any one of us has imagined. Namely, fossil roots, spores, and pollen discovered in West Antarctica showed that about 90 million years ago, it was the home to a thriving temperate rainforest.

During the expedition of the RV Polarstern in 2017, researchers drilled deep into the ground and found a 90-million-year sediment core from beneath the Amundsen Sea!

The location of the area was 560 miles (900 km) from the South Pole, and the soil was much different from the one closer to the surface.

Geologist Johann Klages from the Alfred Wegener Institute, Helmholtz Centre for Polar and Marine Research in Germany, explained that during the previous excavations of the seafloor, researchers found a strange substance beneath a bed of sandstone, so they assumed that there was “something old” there.

They discovered a canister of black, dirt-like material, and in case it was as old as they thought, it would have turned to coal over time. Due to the risks for the material, they decided “ not to open [the canister] onboard.”

After the digital image of the X-ray scans they conducted, they noticed networks of preserved roots throughout the entire soil layer.

The sample dated to the peak dinosaur era, and even though the roots have started decomposing into coal, some of its parts were from plants that are relatives of today’s ferns and conifer trees. The fossilized plant roots and evidence of pollen and spores found on the sample were remains of an ancient rainforest.

This was the first discovery of a sample of the cretaceous-period in such a southern location, and Klages explained:

“During the initial shipboard assessments, the unusual coloration of the sediment layer quickly caught our attention. It clearly differed from the layers above it.”

Professor Ulrich Salzmann, a paleoecologist at Northumbria University and co-author of the study said that they were fascinated to find ” well-preserved diverse fossil pollen and other plant remains in sediment deposited some 90 million years ago, near the South Pole. ”

He added that the remains of the plants show that “the coast of West Antarctica was, back then, a dense temperate, swampy forest, similar to the forests found in New Zealand today.”

Tina van of Flierdt, a professor at the Departments of Earth Science and Engineering at Imperial College London, commented:

“The survival of this 90 million-year-old forest is remarkable but even more surprising is the world that it reveals. Even during months of darkness, swampy temperate rainforests were able to grow close to the South Pole, revealing an even warmer climate than we expected.”

According to researchers, the area where they found the sample has been several hundred kilometers closer to the south at the time of the forest.

Every year, Antarctica sees four months of almost total darkness. While many were confused by the existence of plant and animal life in the ancient forest, experts have come up with an explanation.

Based on biological and geochemical data from the sample, they have made a reconstruction of the climate of the ancient forest.

They explained that the conditions they discovered are possible only in the presence of dense vegetation in the area and a lack of major ice sheets.

Moreover, the global CO2 levels would have been much higher back then, elevating the average global temperature, so the average temperature in the Antarctic must have been around twelve degrees Celsius (54 degrees Fahrenheit).

Geoscientist Torsten Bickert from the University of Bremen in Germany added that previously, it was thought that global CO2 emissions were around one thousand parts per million (ppm).

He added that their model-based experiments showed that “it took concentration levels of 1,120 to 1,680 ppm to reach the average temperatures back then in the Antarctic.”

The findings of this research might reveal the possible effects of the global CO2 levels on the planet if they continue to elevate. They also point out the importance of the cooling effects of ice sheets.

Klages added that “we need to look into these extreme climates that happened on the planet already because they show us what a greenhouse climate looks like.”

Co-author and AWI climate modeler Dr. Gerrit Lohmann, added that all of their climate simulations were “unable to find a satisfactory answer” to the question of what caused this dramatic change of the climate.

The Earth Just Sent Us All To Our Rooms

7 Things Every Child Needs To Hear