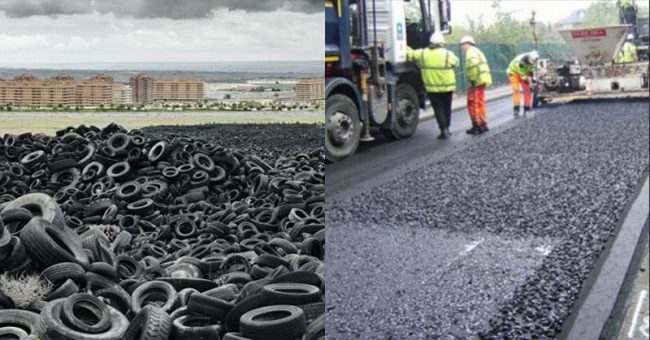 A team of Australian engineers has designed a blend of old tires and rubble which can be used to make more durable roads.

You might have never thought of it this way, but car tires are among the major contributors to the pollution in our oceans.

What’s worse, they are a challenging source of waste, as a result of the large volume produces, their ecologically problematic components, and their durability.

Therefore, experts are trying to find various efficient ways to reuse them and thus lower their devastating effects.

The primary goal of the circular economy is to cut down on the waste we create annually, by reusing old materials. This, in turn, will reduce our reliance on new materials.

Based on this principle, Australian engineers have now developed a new material, out of old tires and rubble, to construct more durable roads.

A team from RMIT University in Australia uses the combination of old tires and rubble left over from construction projects to create a new road material that will be able to endure the impact of traffic better.

There are about one billion tires discarded annually around the world. Recycled concrete aggregate (RCA) is already used as a base layer, beneath the asphalt layer on top.

Yet, this time, engineers add tire crumbs, so the road would be able to handle the elements.

Civil engineer Mohammed Saberian Boroujeni, explains that traditional road bases are made of unsustainable virgin materials such as quarried rock and sand.

“Our blended material is a 100 percent recycled alternative that offers a new way to reuse tire and building waste while performing strongly on key criteria like flexibility, strength, and permanent deformation.”

In this way, they found the correct ratio of rubber to RCA, which is 0.5 percent fine crumb rubber to 99.5 percent RCA. Roads are made of four layers, a subgrade, a base, a sub-base, and an asphalt layer on top.

All layers must be strong enough to endure the pressure of heavy vehicles and at the same time, flexible enough to prevent cracks.

RCA can be used as a base layer alone, but the addition of recycled rubber boosts its durability and strength.

During the testing, the team showed that their material performed well for stress, acid, and water resistance, as well as strength, deformation, and dynamic properties.

Tests also confirmed that it has greater flexibility to prevent cracking and shrinkage.

According to chief investigator Professor Jie Li, even though the construction and scrap tire industries are still producing significantly more waste than what is being reused, recycling is on the rise.

“Solutions to our waste problems will come not only from reducing how much goes to landfill and increasing how much we recycle; developing new and innovative uses for our recycled materials is absolutely vital.”

Boroujeni maintains that this recycled blend will lead to better roads and a better environment since industries push toward a circular economy.

In Australia, currently, only 16 percent of scrap tires are recycled domestically, while about 3.15 million tons of RCA is added to stockpiles every year. Therefore, to building the capacity to generate high-value recycled commodities, the government banned the export of certain waste materials in 2019.

Car tires present a major waste problem all around the world, as they cannot be reused indefinitely.

End of life tires (ELTs) are difficult to recycle, since they are made with a complex mix of materials, and are usually left to pile up in landfills, where they release more CO2 into the air and can leach toxins into the soil and water.

Tire dumps are a fire risk, and such a fire is hard to put out. This is why it is very important to address this issue and find a way to deal with ELTs.

The European Union has led the charge in this case.

One of the most efficient ways to solve this problem is to burn tires for electricity or heat generation, a practice called “energy recovery”. Tires are a greener option than coal, as they don’t produce nitrous oxides.

Many businesses across the EU have been using tires in various ways, such as the base for rubber tracks and playground surfaces, asphalt, and of course roads. Recycled tires can also be used as fitted rubber pads underneath railways or tram tracks, to decrease vibration and noise.

The more ways we find to reuse old materials, the closer we can get to a circular economy. In this way, we can tackle pollution, and make the planet a better place.

This Seashell Succulent Planter Brings The Ocean And Land Stunningly Together