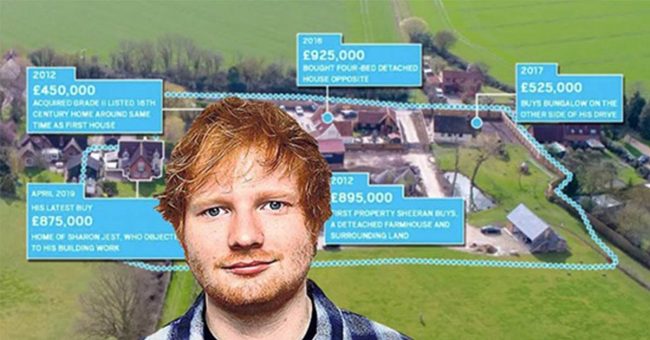 A nice and loving home requires much more than one thinks in the first place. Making the home cozy is not an easy task, and expensive furniture, a pleasant porch, a wide pool, and brightly colored walls are apparently not enough.

Sometimes, things do not depend on us only. What about the neighbors? Well, it seems that if you have several million dollars saved, it will do the trick!

When the neighbors of Ed Sheeran started complaining about the buildings’ works he had planned, he decided to buy their houses and get his privacy back. The singer decided to make Framlingham his home after growing up in Suffolk and meeting his wife, Cherry Seaborn, at school there.

Back in 2012, Sheeran bought his farmhouse for more than a million dollars. Later that same year, he also bought a Grade II listed house for about $550,000. Four years later, he bought the detached house right in front of his home for $1,122,000.

According to an insider:

“Ed’s had neighbors grumbling about noise before, so when he got a chance to buy up the two houses next to his London home, he jumped at the chance. Ed has not only made a wise investment but is limiting the chance of people grumbling about loud music or parties. He also decided to buy the flat above his restaurant because that could have been a massive sticking point for the business going forward.”

Sheeran’s planning consultants had submitted an application to the local council, explaining all the details that were to be done to the garden. Suffolk garden designer, Sue Townsend, created the design that included stepping stones from his drive to the main garden, paths around his house, four treated softwood compost bins, Orangerie terrace, farmhouse, and weathered vintage oak decking.

According to the detailed plans, “the works involve laying new paving and composite decking around three properties, creating a kitchen garden with raised oak beds, brick paver, and gravel paths, building the brick plinth base for a greenhouse.”

Sheeran also intended to build a treehouse and a 32-ft chapel, and his neighbors were displeased with it.

One of his neighbors, Sharon Jest, 59, wrote to the council:

“We have no problems with the proposal but query the mention of the chapel, which has not gained permission and is most likely to be an oversight, and would also request that all external lighting is switched off between midnight and 7 am.”

Jest had also objected because it would ‘rise above the existing hedge and look directly into our property’.

Sheeran has also installed a wildlife pond and a pub, but his neighbors suspected that it is actually a swimming pool in disguise.

The plans were approved by the council, but it was added that he could not use it for other uses, and specifically forbade ‘recreational leisure such as swimming’.

The star argued that he might be in breach of the condition when using a boat or getting in to clear branches or weeds, prompting the council to grant him permission.

One of the locals added:

“It all seems very strange but in actual fact, it appears to have been very carefully thought through. The bales have been placed precisely in the right places and at the right angle to shield his pool.”

So, instead of negotiating with the dissatisfied neighbors, Sheeran came up with a wise solution!

It Seems If You Put Strawberries Into Salt Water, Tiny Bugs Come Out Of Them

Can You Actually See As Well As You Think You Can?