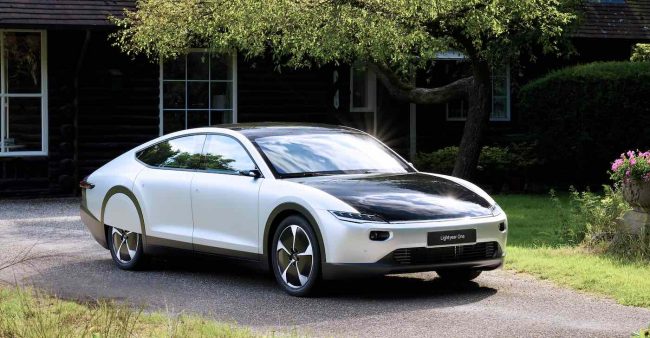 A Dutch company from Eindhoven has released a prototype car called Lightyear One, that won the Bridgestone World Solar Challenge, being the very first long-range solar car in the world.  It has already sold 100 orders to be filled in 2011 and is a four-passenger vehicle.

According to the company’s website, at this point, cars emit 12% of European greenhouse gases, and this number will continue to increase if we sit still.  Also, numerous countries are struggling to build the necessary infrastructure for electric cars.

So, they decided to  ‘leapfrog’ the grid and create Lightyear One, charged by the sun, that can be taken on long road trips without being dependent on charging infrastructure the way that traditional electric vehicles are.

The company informs that it will get to a range of approximately 725 km, and 400 km in the winter at highway speeds with the heating on, which is absolutely amazing since it entirely takes conventional charging and gas out of the equation.

Therefore, it can be charged using the sun, or plugged into a power outlet. It can charge up to 400 km at night from a normal household electrical outlet.

It is constructed from high-tech materials with the lowest weight possible while maintaining stringent passenger safety. Its hood and roof are made of 5 square meters of integrated solar cells in safety glass. The glass is incredibly strong, so a fully-grown adult can walk on them without causing dents.

It can be charged at a regular outlet or a (fast)charging station and being propelled by four independently driven wheels, no energy is lost in transit from the engine to the wheel.

Their website claims that its optimized aerodynamics and design mean that a fully-charged battery has a range of up to 800km, while the integrated solar cells of the 5 m2 hood and roof ensure it charges up to 12km/h as it goes. Additionally, they claim that the already superior range continues to extend with every hour of sunlight.

The company adds that Lightyear One has been engineered coming from a radically different perspective, so they focused on finding the best way to optimize efficiency and safety. They started from scratch, and left convention aside and followed only the laws of physics, and managed to get the most out of every joule of energy.

Yet, as expected, many people could not afford this amazing car. Its production in their new facility in Helmond is still slow, but buyers can reserve one of the 500 electric vehicles for a reservation fee of €119,000.

This amazing car raises the following question once more: why are we still driving cars that use gas when we have the potential and the resources to use electric and solar powdered ones?

Science Says Silence Is Vital For Our Brains