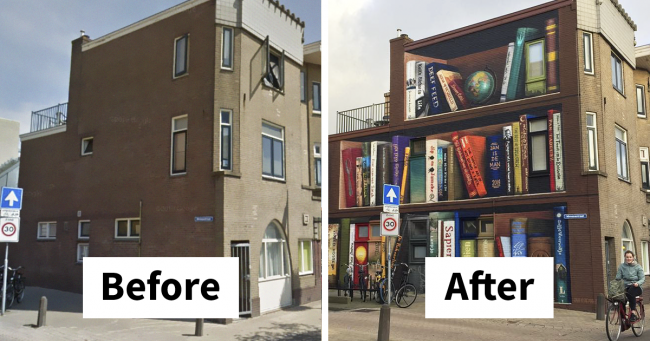 Mural art has been around from prehistoric times to today. From the cave paintings to the street art murals nowadays, these works of art hold great significance, as they symbolize important traits of an era, and its life activities, scenery, traditions, and cultures.

Murals are a powerful visual communication tool, as they express society, and all its stories, values, changes, and dreams.

An apartment building in Utrecht, Netherlands became the canvass for the masterpiece of the Dutch street artist Jan Is De Man, as he decided to adorn it with a charming tri-level trompe l’oeil wall mural bookcase.

He decorated the neighborhood with the attractive 3D mural with the help of a fellow street artist Deef Feed, the co-owner of their tattoo shop “Blackbook Tattoos” in the center of Utrecht.

Together, these artists have created several other murals on the streets, buildings, and skate parks before.

Street artists Jan Is De Man and Deef Feed created a literary mural for a neighborhood in Utrecht, Netherlands 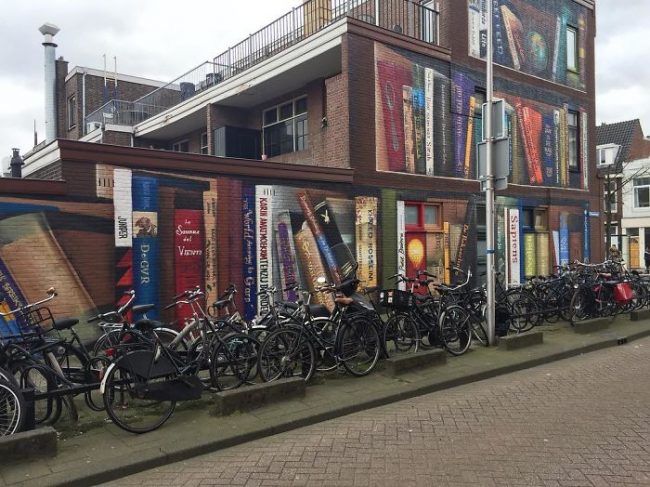 The two street artists converted the side of the three-story building into a multi-level bookshelf, filled with the favorite books from the residents’ collections.

Additionally, they painted a small black book on the left-hand side of the bottom shelf that features a small Playboy bunny logo on the spine.

“I know the people who live on the ground floor very well. They’ve wanted a mural by my hand for a while. They also wanted to let me feel free in my design as long as it would bring something positive to their neighborhood.

The first idea was to paint a smiley. A huge smiley. Because I believe people become happier when they see a smiley every day. But this idea didn’t feel complete, and it felt too simple.”

He eventually got the idea for a l’oeil mural – “visual illusions in art, especially as used to trick the eye into perceiving a painted detail as a three-dimensional object.” 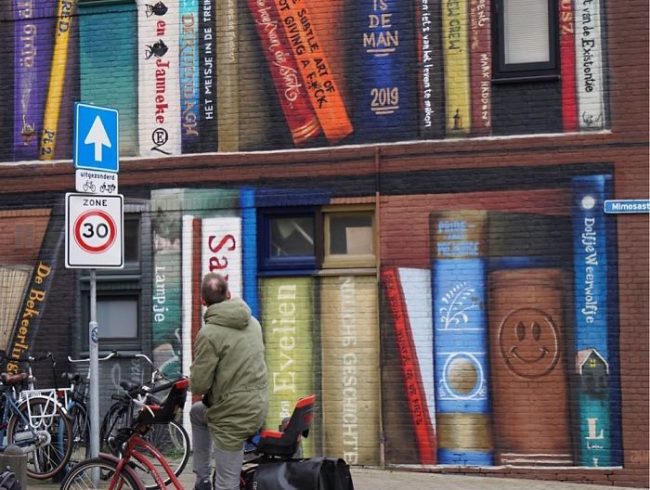 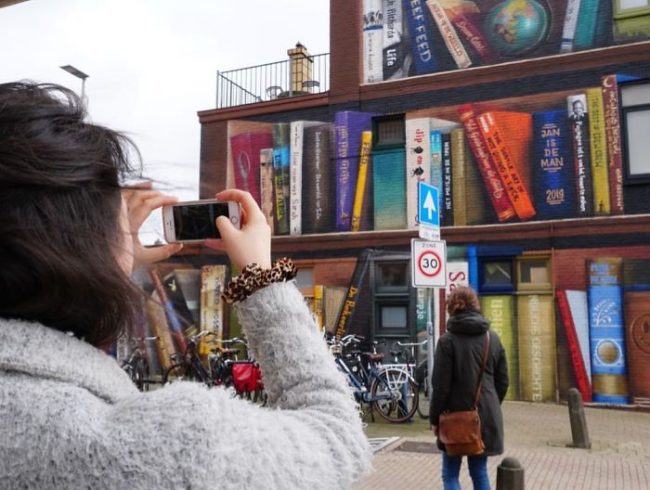 “I studied the shape of the house and the location where this house stands in, and suddenly the idea of making a huge bookcase hit me. I love making 3D art illusions on walls, and I like to see smiles on people’s faces and this idea (I thought meanwhile) could bring all this together.” 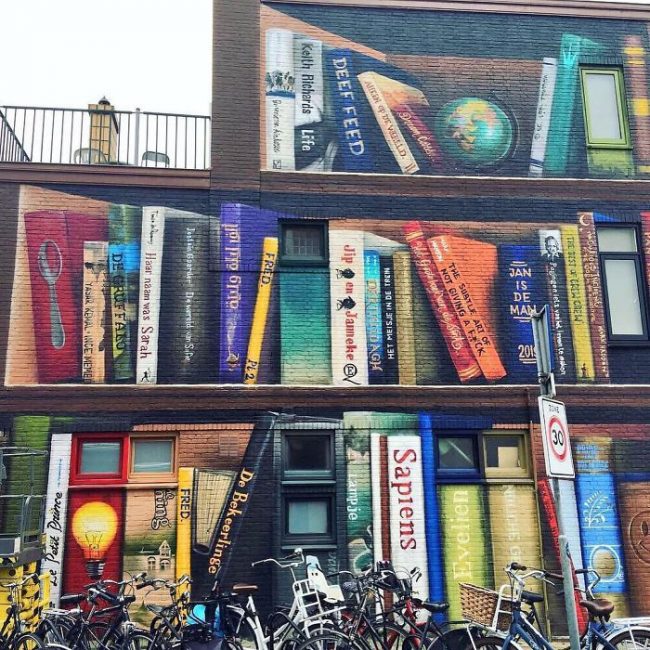 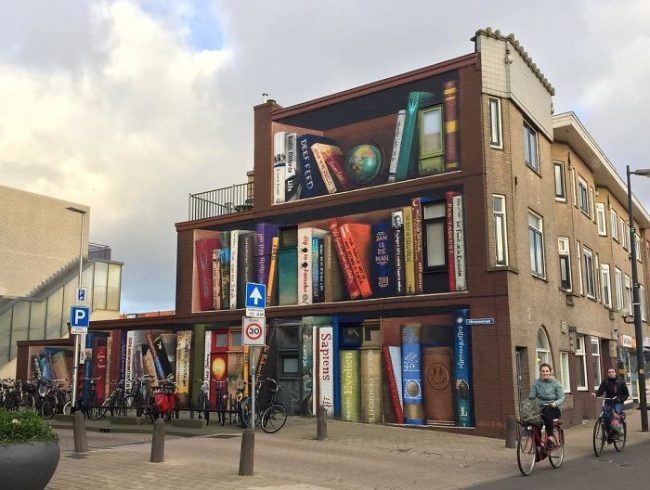 The project involved the residents as well:

“We entered the community by asking people for their favorite books, and we were able to put eight languages and cultures together in the same concept. Everybody, every age, every culture, every language was welcome. The only rule I set up to participate in this art project was: no political books and no religious books. Besides that, every book title was welcome.” 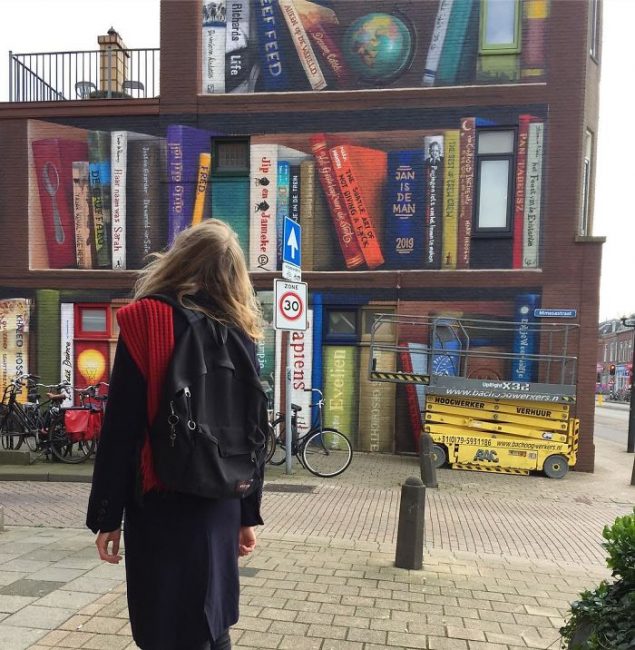 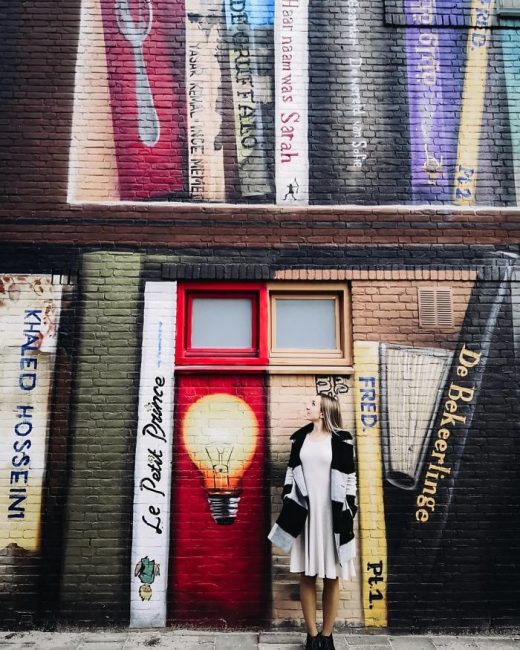 It took them a week to make their idea come true, because, as Jan Is De Man said that “ when you got the right idea, then there is not much difficult.” 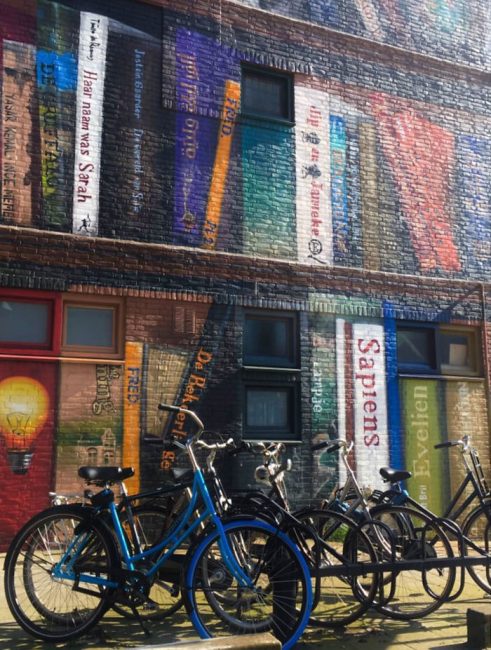 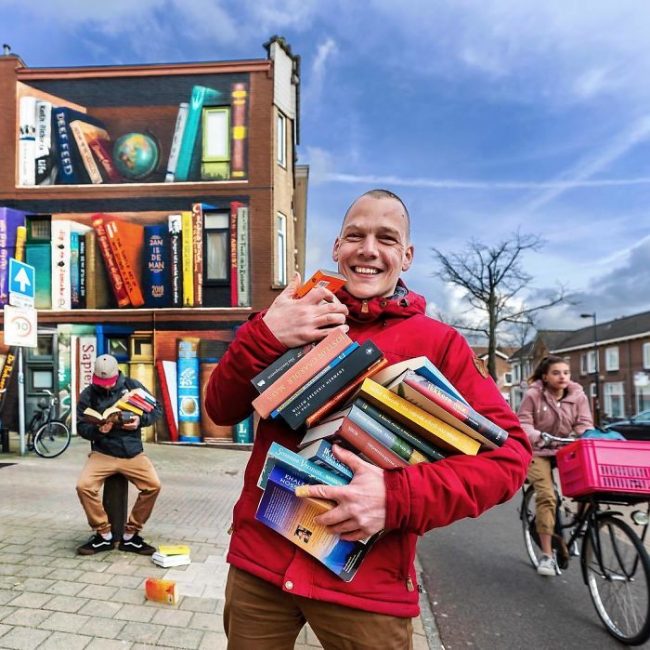 The muralist said that his favorite titles on the shelf were “ The curious incident of the dog in the nighttime“ written by Mark Haddon, and, of course, the Playboy.”

The names of the artists are penned as two of the book titles. 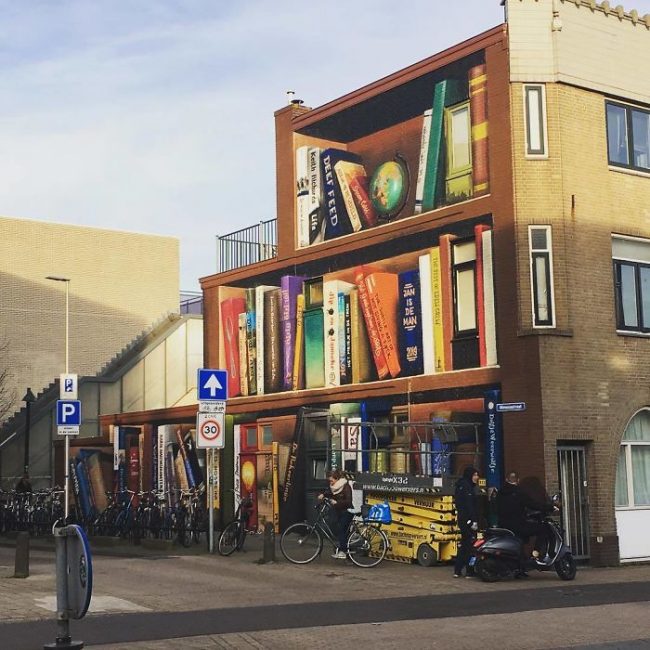 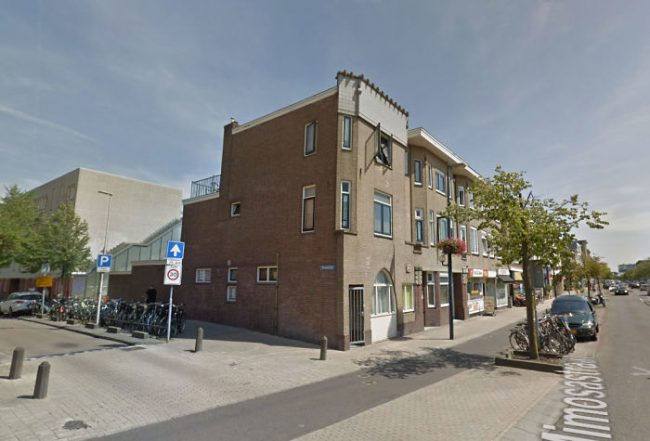 “The neighborhood where this work was made is filled with different cultures. And I’ve noticed that this project brought (and hopefully for as long as it lasts) people together without pushing it. 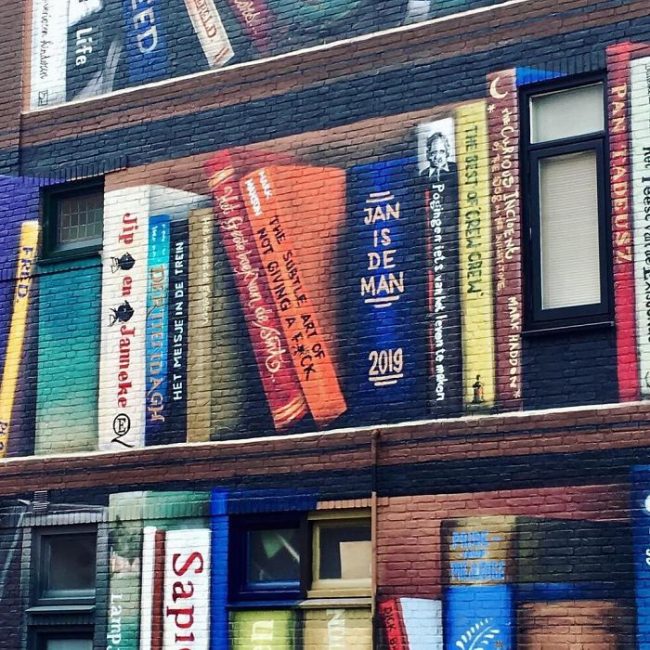 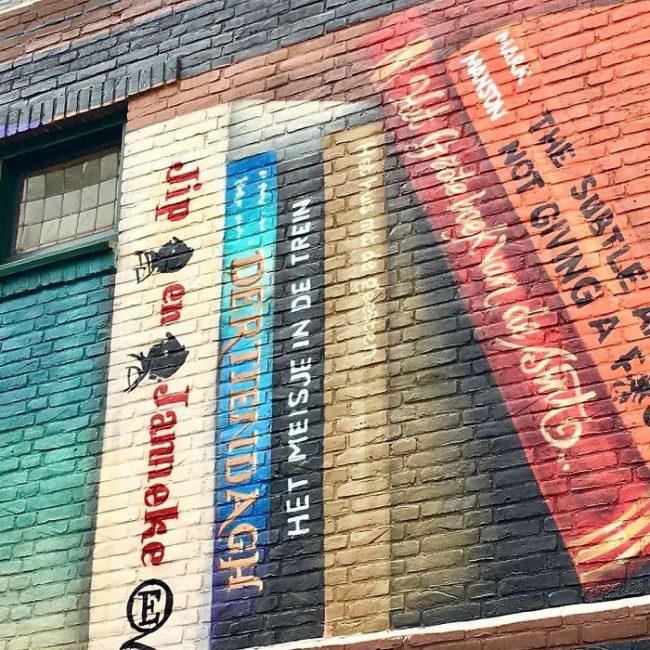 While we can’t wait to see more of him, he did not want to reveal his plans, adding that “actions speak louder than words.”

So, let’s be patient! 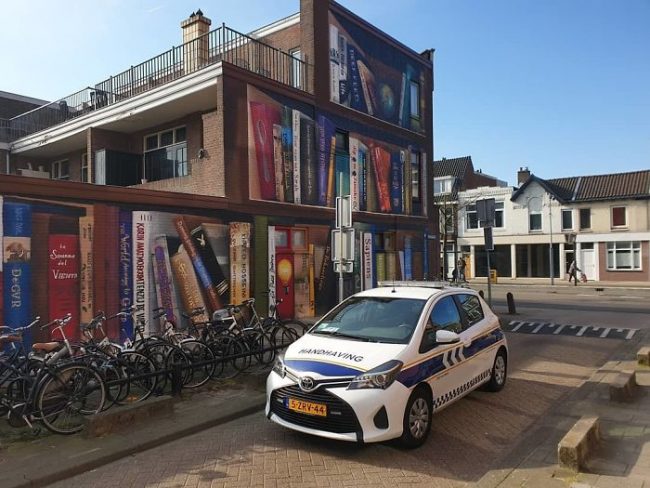