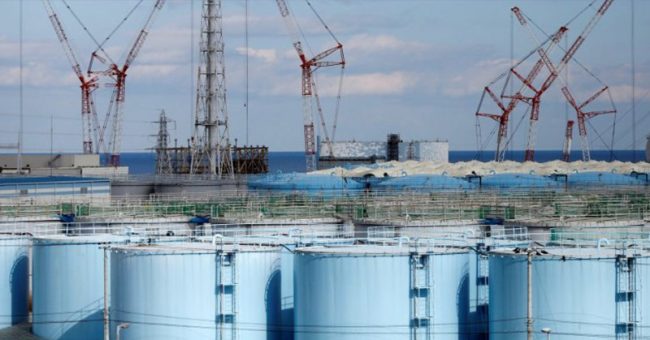 Tepco has struggled to deal with the buildup of groundwater, which becomes contaminated when it mixes with water used to prevent the three damaged reactor cores from melting.

As a result, over the last eight years, Tepco has collected more than 1 million tonnes of contaminated water.

To store this contaminated water, the plant currently has 1,000 sealed tanks, but as the water is still accumulating, it is estimated that there’s enough room to keep the liquid contained through summer 2022, but after that, there will be no space left.

Therefore, Yoshiaki Harada, Japan’s environmental minister, said that he thinks “the only option will be to drain it into the sea and dilute [the contaminated water].”

He did not say how much water would need to be dumped into the ocean.

A study by Hiroshi Miyano, who heads a committee studying the decommissioning of Fukushima Daiichi at the Atomic Energy Society of Japan, suggests that it could take 17 years to discharge the treated water after it has been diluted to reduce radioactive substances to levels that meet the plant’s safety standards.

According to Reuters, Harada does not have the final say in the matter, and Tepco is waiting for the Japanese government to decide after consulting a team of experts.

The utility reported that it will run out of room to store the water by 2022.

The comments of Harada have led to vehement opposition from environmental advocacy organizations like Greenpeace, which stated that the “only environmentally acceptable option” would be to continue to store the water and filter it for contaminants.

In case the government gives green light to dump the waste into the sea, it will undoubtedly outrage neighbors, like South Korea, which summoned a senior Japanese embassy official to explain how the Fukushima water would be dealt with.

Relations between the East Asian nations are already frosty after a dispute over compensation for Koreans forced to work in Japanese factories in World War Two.

Kim Ik-Jung, a member of Korea’s Nuclear Safety and Security Commission, suggested another idea: Japan can keep it in the tanks until the radiation level becomes low enough. Yet, this will take time and money, and after about 300 years, it will be okay to discharge the water.

Tepco also faces opposition from fishermen, and any decision to dispose of the waste water into the sea would anger them, as have spent the past eight years rebuilding their industry.

Last year, it admitted that the water in its tanks still contained contaminants beside tritium, an isotope of hydrogen which is very hard to separate.

Some tanks had radiation levels that were 20,000 times greater than the government’s safety standards.

Sending that contaminated water into the ocean could allow it to travel to nearby shores in South Korea, contaminating that local seafood supply as well.

As a result, Jan Hakervamp, a nuclear-energy expert at Greenpeace said:

“The sea is not a garbage dump. The sea is a common home for all people and creatures and must be protected.”

Shaun Burnie, a senior nuclear specialist with Greenpeace Germany, said that the government must choose the only environmentally acceptable option for managing this water crisis which is long term storage and processing to remove radioactivity.

During the 2011 earthquake, cleanup workers used water to cool down nuclear reactor cores. Groundwater then seeped up due to the tsunami and mixed with radioactive materials. The primary points of concern for this contaminated water are isotopes such as strontium and tritium.

Yet, the filtering system ALPS (advanced liquid processing system) failed to completely decontaminate the polluted water, so Tepco has been keeping it in what was meant to be temporary storage facilities.

Some estimates indicate that about 80% of the plant’s water still measures radiation levels too high to be dumped into the ocean, according to government regulations.

On the other hand, James Conca, a scientist in the field of the earth and environmental sciences for 33 years, specializing in geologic disposal of nuclear waste, energy-related research, planetary surface processes, radiobiology and shielding for space colonies, subsurface transport and environmental clean-up of heavy metals, agrees with Harada.

He told Forbes magazine that dumping the water over a period of ten years is actually the safest thing to do. He explained that tritium does not harm humans or the environment, regardless of the concentration or the dose.

He added that concentrated and containerized, despite being very expensive with no benefit, it becomes a bigger threat to people and the environment.

Yet, Greenpeace representatives believe the cost is the main reason Japan’s environment minister maintains they are running out of time, claiming that they do not want to pay the full costs of storing and processing the contaminated water. One system from a company called Kurion would have cost around US$1 billion to set up, plus several hundred million dollars to operate each year.

After Harada’s statement, the former Tepco chairman, Tsunehisa Katsumata and two former colleagues who had been accused of failing to take adequate precautions against a natural disaster were acquitted.

Judge Kenichi Nagafuchi, who delivered the verdict, said that it is impossible to operate a nuclear plant if operators are obliged to predict every possibility about a tsunami and take necessary measures.

While waiting for Japan to determine the actions Tepco must take, officials and scientists will argue, and the giant storage units of contaminated water will continue to fill up.

Baby Born With Gray Hair Has The Internet Talking