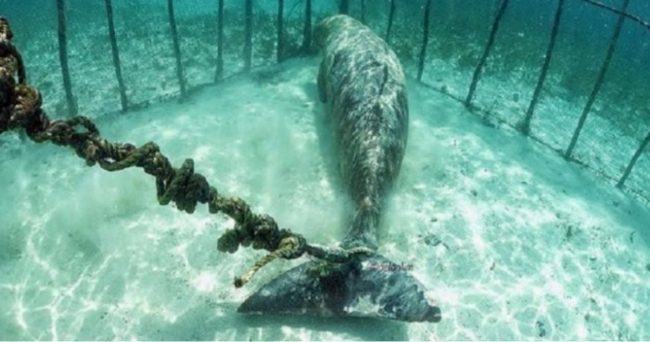 Drone footage has found about 100 cetaceans kept inside a series of tiny enclosures off Russia’s Pacific coast, near to the southeastern city of Nakhodka.

Activists claim that this “whale jail” was the place where 11 orcas and 90 beluga whales were kept illegally, and Whale and Dolphin Conservation reports that it is the largest number of marine animals to be held in such a way.

The independent Russian newspaper Novaya Gazeta originally reported the information on 30 October 2018. It revealed that over 100 whales were caged in small enclosures off Russia’s Pacific coast close to the city of Nakhodka, possibly in violation of an international ban on commercial whale hunting. The account has since been picked up by many =English-language news outlets such as CBS News and the UK’s Telegraph.

Prosecutors intend to investigate if they are being kept in the tiny enclosures illegally. There is evidence that they were caught and kept for commercial purposes, and they were intended to be sold off to Chinese ocean theme parks at a high price.

There are about 60 marine parks in China, and about a dozen are under construction.

An Orca whale can reportedly fetch more than $6 million in this booming ocean theme park industry.

Yet, companies claim that the cetaceans were caught for scientific and educational purposes, and lawyers examine the conditions they are being kept in, which have been depicted as “torture” by Greenpeace Russia.

Yet, the footage found there are much more than the 13 companies reportedly received permission to capture. Moreover, the tanks also contained infants, which is off limits and unacceptable even for scientific and educational purposes.

Experts warn that this is harmful to both, the captivated cetaceans, and the future of the species.

Greenpeace Russia research coordinator Oganes Targulyan said that the risk of the loss of the entire orca population is increased by catching them at this tempo. While the current capture quota is 13 animals annually, she says that no one is taking into account that at least one orca is killed for every one that is caught.

The fate of these animals is unclear even though Russian prosecutors are investigating the capture and export of the animals by four companies, identified by Novaya Gazeta as LLC Oceanarium DV, LLC Afalina, LLC Bely Kit and LLC Sochi Dolphinarium.

Snopes reported that Thomas Henningsen, a marine biologist and the head of the Russia program for the international environmental activist organization Greenpeace, informed them via email that as of 19 December 2018 the whales were still in the cages, living in “disastrous and cruel” conditions.