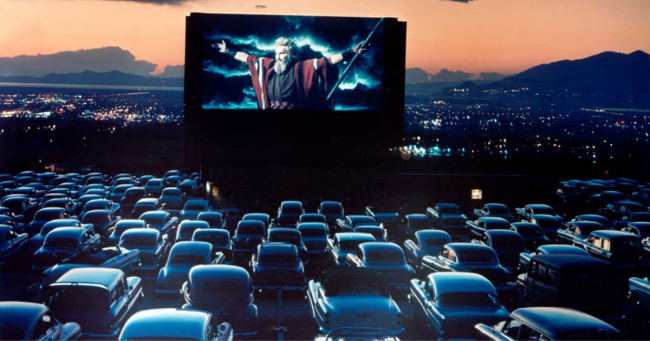 Our world will probably never be the same again. The dangerous COVID-19 has shocked and permanently changed the way we lived our lives. Plus, we are yet to witness its consequences.

Have you started missing things you previously took for granted? Do you miss your relaxing walks in the park, dinner with friends, cinema nights with your loved one?

Due to the coronavirus pandemic, more than 40,000 big screens have been closed for an indefinite amount of time. Many even suspect that a quarter of all theaters could close down for good as a result of the sharp economic downturn.

But is there a way? Many remembered the drive-in theaters, which have been extremely popular in the 1960s.

These days, these bygone cinematic venues might be ideal for us, as they will keep us entertained while following the physical distancing guidelines laid out by state authorities.

“Where is the public safety issue? It’s a drive-in theater. You’re in the car with the same people.”

Out of about 320 drive-in theaters across the United States, there are only 25 of them currently open. Also, ticket sales during the coronavirus pandemic have been reported to be “steady but not spectacular.”

The two main reasons for this remain to be the lack of new Hollywood movies due to the coronavirus restrictions and the delayed premiers of summer blockbusters of numerous major studios.

It’s a great turn out for the 5:00 PM drive-in movie at Northern Cass tonight. pic.twitter.com/DuY2ucTqJA

On the other hand, the old-school drive-ins are more popular overseas. In South Korea and Germany, people are even lining up to watch films.

There are two year-round drive-in venues in Germany, and open-air theater Autokino Essen sold out every screening since the beginning of the country’s lockdown early in March.

Frank Peciak, manager of Autokino Essen, explained that no matter what they show,” people just want to get out and watch a movie”, so they are sold out weeks in advance.

In Cologne, the drive-in theater in Cologne is also entirely booked. No more than 250 cars are allowed on the 1,000-capacity lot, and tickets are scanned by a gloved employee through a closed window.

Due to the increased demand, there are numerous pop-up drive-ins, such as the one of the events management company D.Live, set up in the parking lot of the Dusseldorf Trade Fair.

“Whatever the state wants us to do, we’re willing to do. We want people to enjoy going out, but in a safe environment. If you’re in your car with an average family — two parents in the front seat and two kids in the back — you’re sitting in a car with people you’re within the house. It’s a little outing.”

Thomas, the Showboat Drive-In Theater owner in Texas, believes that the viability of the drive-in business will grow “because people will have fears of gathering in public”, and “people will come because they want that sense of normalcy.”

While the future of the movie business remains uncertain, senior media analyst Paul Dergarabedian of Comscore pointed out:

“The desire for people to somehow recapture the singular, irreplicable, communal big-screen movie theater experience in any way they can is a testament to how important the moviegoing experience is. Particularly during these obviously trying and unprecedented times.”

So, are you interested in catching a good film alongside a vibrant audience?

This GoPro Camera Got Swallowed By Lava, Survived and Recorded Everything

Person Filmed Sneaking Down Street Dressed as a Bush During Quarantine