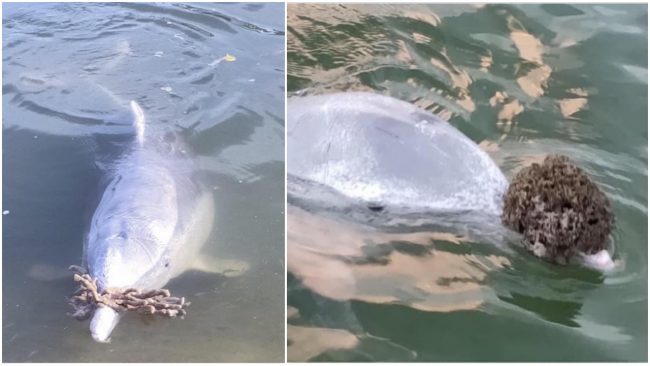 The coronavirus forced the entire world to take a few-month break, with people being urged to remain at home as one of the top strategies to flatten the curve.

Yet, while we all found it difficult to cope with the quarantine measures and isolate, nature seems to be enjoying the peace. Yet, there is a new turn of events, apparently, at least for the dolphins at Tin Can Bay in Queensland, Australia!

The dolphins have been lining up to bring gifts ashore – “apparently because they’re missing interaction with humans.”

All year round, people visit Barnacles Café& Dolphin feeding and interact with wild humpback dolphins. These cute wild dolphins seem to enjoy the fresh fish visitors are allowed to treat them.

In the middle of March, Australia issued strict quarantine rules, so the humpbacks may have been perplexed by the sudden disappearance of their friends.

One of them, called Mystique,29,  has been bringing ashore an increasingly generous selection of items.

One of the volunteers that feed the dolphins, Lyn McPherson, explained:

‘(He) brings in objects on his rostrum or beak, and then he carefully presents them to us. ‘What we have to do is give him a fish in return… We haven’t trained him, but he has trained us to do this. We swear he has a collection waiting to bring to us.’

“The pod has been bringing us regular gifts, showing us how much they’re missing the public interaction and attention. They are definitely missing you all.”

Even though they have done it in the past as well, this time, they display the behavior more often.

“Nothing surprises me with dolphins and their behavior anymore. They do everything – they use tools, they have culture, they have something similar to names in signature whistles.”

Dolphins are one of the most intelligent animal species on the planet. While they have always fascinated us, researchers keep discovering more reasons to love them.

They have even found that dolphins display skills and sophistication previously attributed only to people, like strong problem-solving capabilities and a complex system of communication.

Yet, McGovern explained that we should not project our own feelings with theirs and speculated it may be a “play-like behavior”:

“In all likelihood, they probably don’t miss humans per se … They probably miss a free meal and the routine.

They often play with bits of weed and coral and all sorts of things and just leave it on their rostrum (nose).They’re used to getting fed now, so they’re used to humans coming in. When it’s not happening, maybe it’s just out of boredom.”

However, while border control remains strict, states and territories have been easing restrictions on indoor and outdoor gatherings and business.

Barnacles Café has reopened after the phasing out of coronavirus restrictions, so they will now get all the attention, play, and food they were longing for!