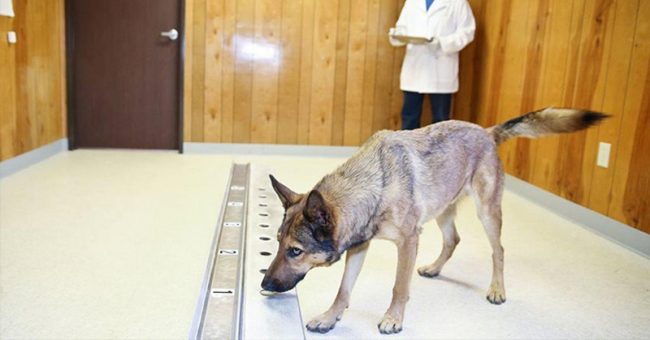 If you own a dog, you know from your own experience that these adorable pets have an innate ability to sense when something is wrong. They have already been shown to pick up the scent of Parkinson’s disease and tell when a person with diabetes is suffering from dangerous blood sugar levels.

Well, researchers have now found that their nose may become the latest frontier in cancer detection!

At the 2019 annual meeting for the American Society for Biochemistry and Molecular Biology in Orlando, Florida, a study during the Experimental Biology conference explained how dogs can use their extraordinary sense of smell to pick up on cancerous blood samples.

Dogs have an astonishing sense of smell, and their smell receptors are 10,000 times more accurate than humans’, making them highly sensitive to odors we can’t perceive.

The human brain is dominated by the visual cortex, but the brain of a dog is controlled by the smell or olfactory cortex, which is around 40 times larger than ours. Additionally, the olfactory bulb in a dog has a large number of smell-sensitive receptors, which range between 125 to 220 million, and it is a hundred thousand to a million times more reactive than that of humans.

In a lab, trained dogs managed to pick out cancerous blood samples from patients with close to a 97 percent accuracy.

According to the lead researcher of this study, Heather Junqueira, these findings could pave the way for using canine scent detection as a screening method for cancers and could determine the biologic compounds the dogs detect and then design cancer-screening tests based on them.

Together with her team at BioScentDx, she taught four beagles how to distinguish between healthy blood samples and those from patients with malignant lung cancer.

One of the dogs didn’t cooperate, but the other three identified the samples at an accuracy of 96.7 percent.

Heather is now investigating if dogs can smell cancer in the breath condensate of breast cancer patients. She stated that dogs detect pre-cancerous cells, meaning those at stage 0-1.

Their 26 dogs include general cancer dogs and those trained in specific tumor types: currently breast and lung, but soon will include prostate, colorectal and melanoma as well.

These new tests could be of great help, as a viable and affordable method to early detect cancer.

Heather explained that even though there is currently no cure for cancer, early detection offers the best hope of survival. Therefore, a highly sensitive test for detecting cancer could potentially save thousands of lives and change the way the disease is treated.

Yet, Heather also reminds that these screenings are not meant to replace a preventative visit to your medical doctor.