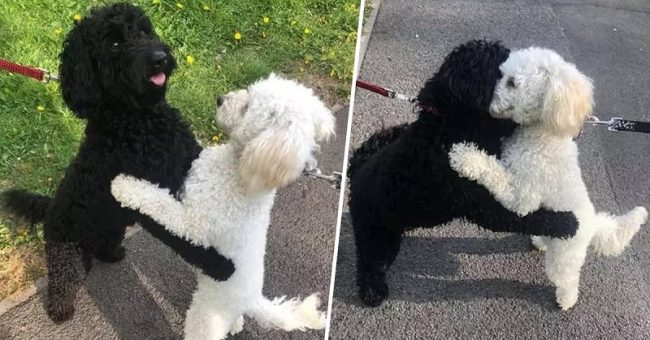 Dogs are truly our best friends, due to numerous reasons. These loving animals are simply amazing- they are caring, loyal, fun, and smart. Dogs develop strong bonds with both, their animal and human family.

The intensity of the bond with its siblings depends on the time the dog spends with its littermates.

Yet, some signs indicate that the dogs recognize each other later in life, like their body language, ( being alert, sniffing, tail wagging, staring), being very attentive or calm, or staying very close to the other dog.

A story shared recently melted numerous hearts. Namely, Susan Killip wrote about the surprise meeting of two dogs, the siblings cockapoos Monty and Rosie, who shared a special hug when they met after they have been separated as puppies.

Susan described it as “lovely, they both just jumped up and hugged each other”, and commented that  “it was amazing they remembered each other after 10 months of not seeing each other.”

The dogs were close from their birth last June, and even though the pack consisted of six dogs, these two dogs were the closest.

“They were born at Bishop Middleham on 30th June. There were 6 puppies, but Monty and Rosie were always together. We had picked Rosie as she was the little quiet puppy in the corner and our friend Jean, who decided to get a puppy too, picked Monty.

Due to complications with the breeder, Jean looked after Rosie for 2 weeks after we picked her up in September as we already had a holiday booked. They spent a week together and had so much fun.

We picked her up after our holiday and brought her back home and she never saw Monty again until about 3 weeks ago, as Jean and David live in the next village, so we never see them. We often text each other to see how the dogs are doing, but we never had time due to work commitments to meet up.” 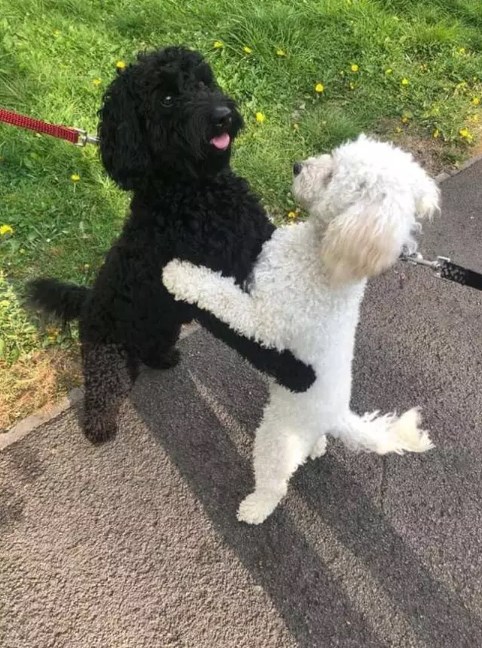 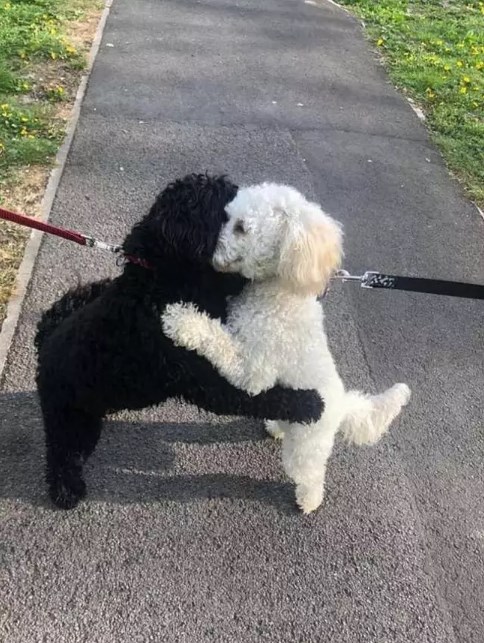 The surprise reunion went viral on Twitter after Libby Pincher posted a conversation with her dad.

pls look at what my dad sent me this morning I cannot even😭❣️🐶 pic.twitter.com/QTy5J8uEwZ

His business partner, Dave, walked his cockapoo Monty in Aycliffe, County Durham, and he noticed a similar-looking dog. When they approached each other, the owners started talking, and realized that the dogs were from the same litter!

He explained the chance encounter:

“So, Dave was out walking his dog, and there was a couple walking towards him with a white version of his dog. Turns out they are brother and sister from the same litter. But instead of just playing like they do with other dogs, look at this.”

Susan and her followers believe the two dogs recognized each other, and some experts believe in such claims as well.

Steven R. Lindsy confirms that dogs can identify their siblings and parents later in life, but only if they have spent over 6 weeks together.

First of all, the nose of a dog is 10,000 times more sensitive than ours, so they probably smell their siblings. Plus, many studies indicate that dogs can recognize and remember specific faces, including the one of their siblings. Moreover, DNA may also play a role.

Yet, their reaction might be due to the dogs recognizing something comforting or familiar in the other dog.

“Dogs of the same breed often gravitate toward each other. What we know is this: The scent of another dog stays with a dog for a long time … But whether the dog is processing that it’s a familial connection, we’ll probably never know for sure.”

Even though “it’s a bit difficult at the moment, but after this is all over”, Susan and Monty’s owner decided to make sure the siblings will spend more time together in the future!

11 Plants That You Can Always Regrow From Kitchen Scraps