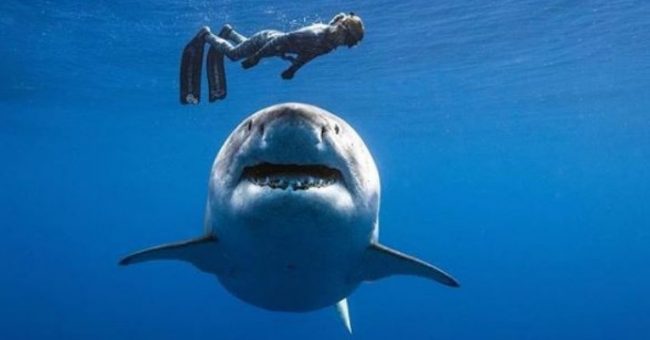 Do you enjoy diving? Professional divers are required to invest in it much more than their desire to explore the underwater world, of course. Diving is mentally and physically demanding, and it can be a high hazard activity, so divers need to follow specific regulations to control the risks.

Yet, the most inspiring of them are apparently fearless!

On January 15, 2019, while divers from One Ocean Diving and Research, Ocean Ramsey and Juan Oliphant, were diving off the coast of Oahu in Hawaii, they came across what could be one of the largest great white sharks ever recorded, swimming with many tiger sharks.

The carcass of a dead sperm whale attracted the white shark to come to the area. The brave divers decided to swim next to it, to showcase that sharks can be gentle, especially the white ones!

They believe it was the well-known “Deep Blue”, one of the largest great whites on record, due to its distinctive size and markings, but this is not confirmed.

“She looks the part right now. Maybe even more exciting that there is another massive, you know, super-size great white shark out there. Because their populations are so dwindling.”

Ocean Ramsey, a shark researcher, and conservationist, that operates the Oahu-based One Ocean Diving and Research with her fiancé and business partner, Oliphant, explained that they were filming the tiger sharks when they spotted the shark.

“We saw a few tigers and then she came up and all the other sharks split, and she started brushing up against the boat. She was just this big beautiful gentle giant wanting to use our boat as a scratching post. We went out at sunrise, and she stayed with us pretty much throughout the day.”

Oliphant documented the event and shared the video on Instagram, with a caption: “GREAT WHITE SHARK.” The video went viral, with over 842K views. 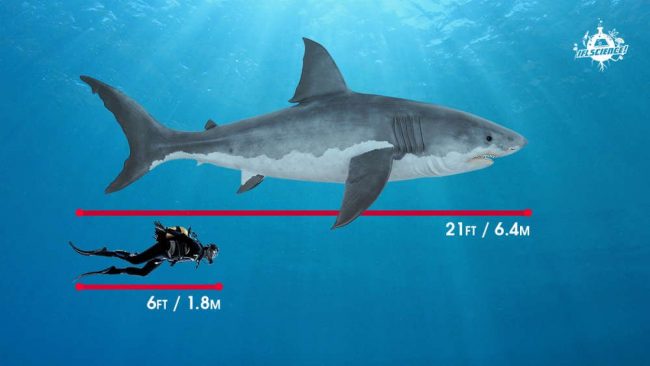 Great white sharks fall into the category of vulnerable species, and they are a rare sight in Hawaii. Ramsey explained that this is because the water there is too warm in comparison to the cold Pacific coast of California where they feed on sea lions and elephant seals. Her record size makes her even rarer.

Yet, the astonishing width made Ramsey believe that the creature is pregnant.

I don’t know how old she is. But for her to survive through so many longline fisheries and, you know, gill nets and team nets and fishermen who might just kill her because they think that she is a monster … it’s very special.” 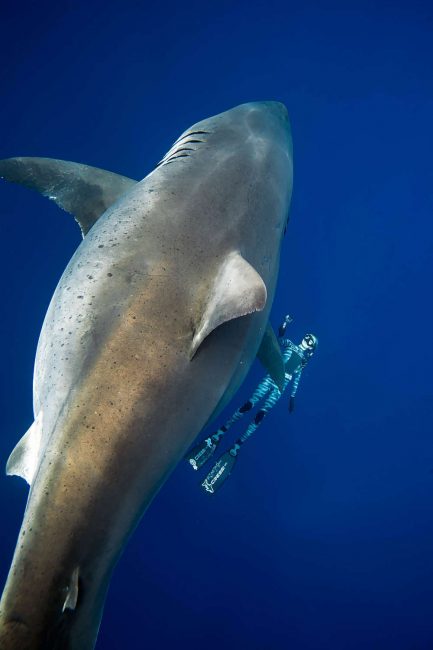 “I try hard to replace fear with scientific facts and encourage a healthy level of respect for sharks as #ApexPredatorsNotMonsters but not puppies… They are sharks and I love and respect them for what they are.”

Words and photo by co-founder @juansharks using @aquatech_imagingsolutions ・・・ PERSPECTIVE ❤️ Deep Blue going straight to @oceanramsey If you are ever approached by a large shark, this is how you want to respond to it, swim away from it slowly to give the shark space in case it is being territorial and always keep eye contact, never turn away and act like prey. So much more that needs to be applied for diving with sharks safely, to #coexist Ocean wrote a nice disclaimer for people wanting to just jump in the water with a shark like Deep Blue. Disclaimer: I highly discourage people from jumping into the water purposely with Great #WhiteSharks and TigerSharks and all sharks should be given respect as space as wild animals and PROTECTION from wasteful killing for their important ecological role. I work daily in the water with sharks as a shark biologist and teach public and professional safety programs through @OneoceanResearch and @OneOceanDiving and through a number of our international projects which also includes #greatWhiteShark research specifically. I try hard to replace fear with scientific facts and encourage a healthy level of respect for sharks as #apexPredatorsNotMonsters but not puppies…but not monsters. They are sharks and I love and respect them for what they are. Yes I absolutely LOVE sharks and have a deep understanding and respect for their capabilities combined with well over a decade of full time experience working in-water with them. My life mission, passion, and I think purpose is to help further conservation efforts for them through research, conservation, design, and immersive and impactful programs and outreach. Please check out all the divisions of #OneOceanDiving listed below for more information and please help us to ban #sharkfinning #sharkfishing #sharksportfishing and #sharkculling around the world. I just found out the the bill to ban the purposeful killing of sharks and rays in Hawaii will be re-introduced this year in both eh house and senate following all the positive shark press that has come from this incredible encounter in the last few days. Mahalo nui loa (thank you) to all those who support efforts for shark conservation

#Jaws was a fictitious film whose poster kind of looks like this, so this is my effort at an Anti-Jaws type media piece @savingjawsmovie . I’ve been swimming with sharks my whole life and working professionally with them for over 15 years. There’s a challenge I have in my efforts, to find a balance between helping people to overcome their fear of sharks that often stems for fictitious demonizing media and instilling a healthy level of respect for sharks as very capable apex predators #ApexPredatorNotMonster not puppy (cause if you pet puppies often even puppies bite, actually a lot ;)). Having worked with sharks for so long I can fully appreciate what they are capable of because I have been rushed by sharks and had to deter them and I have had to leave the water and I have watched them actively predate and compete for space and have confrontations. However, I’ve also had the most incredible moments of my life in the water with them where 99.9% of the time they cruise gracefully around and so long as I keep looking around and pay attention constantly and quietly and give respect and attention to the more dominant individuals and challenging juveniles on a CONSTANT bases I am treated as more or less an equal predator. Never complacent, always respectful and adapting at every second to every movement. I reached the point long ago where I dedicated my life to conservation and I love it, I love educating people about sharks and introducing them to them in a professional guided situation through the program I co-founded @oneoceandiving where we also collect data @oneoceanresearch @oneoceansharks and help support conservation through @Oneoceanconservation and @OneoceanEducation and @Oneoceanglobal @Waterinspired @oneoceanhawaii and other with funds from @oneoceandesigns and diving I love studying shark behavior and body language and its an absolute pleasure to share that with people and help them to better appreciate sharks and I hope inspire them to help save them. Check out http://HelpSaveSharks.Org for more ways to get involved. #Aloha #hawaii #greatWhiteHawaii #SaveTheOcean #ocean #discoversharks #oneoceanconservation #OneOceanDiving PHOTO CREDIT @juansharks ❤️

“There’s not a lot of sympathy for sharks because of the way they’re portrayed in media and they don’t have the cute cuddly appearance. You can’t hate them for being predators. We need them for healthy marine ecosystems.”

We must agree with this. While people kill between 100 and 273 million sharks annually, there are around five fatalities from sharks.

Yet, they are still dangerous, so Oliphant advises:

“If you are ever approached by a large shark, this is how you want to respond to it, swim away from it slowly to give the shark space in case it is being territorial and always keep eye contact, never turn away and act like prey.”

Toxic People Never Apologize For Anything Or Admit Their Mistakes