The world remains crippled by fear and anxiety due to the coronavirus pandemic, and saving as many lives as possible and flattening the curve is the priority of all countries around the world.

Yet, do you think we should focus on winning the battle, and lose the war? Apparently, many have neglected a very important potential adverse effect of the protective equipment-- pollution.

Environmentalists warn that the numerous disposable face masks and gloves have become a major threat to oceans and marine life.

Cloth masks are advised by the CDC as a way to prevent the spread of the infection by people who show no symptoms. Yet, many experts urge people not to buy these single-use medical masks and latex gloves as healthcare workers need them much more.

Now, people have posted photos of hundreds of blue gloves and masks thrown in shopping carts, on streets, parking lots, and beaches, on social media.

Apart from posing a risk during the pandemic, many of them contain materials that are not biodegradable and cannot be recycled. If not picked up, they can be caught by a gust of wind or washed down drains, and end up polluting waterways and oceans. 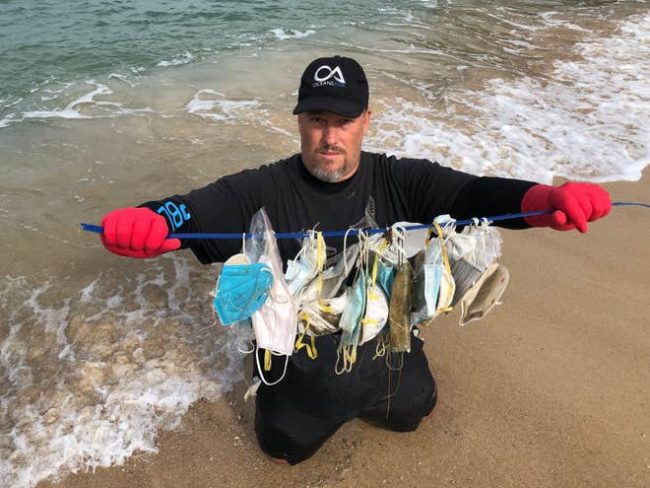 It is estimated that pollution endangers over 600 different wildlife species. Turtles, seabirds, and other marine mammals might confuse the latex gloves with food due to their bright colors.

Additionally, a billion people consume seafood as their primary protein source, so they are indirectly threatened by pollution as well. In February, a conservation group OceansAsia posted a photo of dozens of surgical masks discarded on Hong Kong beaches.

“The way I see these masks in the environment is just another addition to the ever-growing marine debris crisis our oceans are facing. No better, no worse, just shouldn’t be there in the first place. I’m waiting to hear of the first necropsy that finds masks inside a dead marine animal. It’s not a question of if, but when.”

Stokes reported finding 70 discarded masks on 100m stretch of beach the first time, and when he returned, he discovered 30 more.

Teale Phelps Bondaroff, Director of Research at OceansAsia, explained that the elevated number of discarded masks “underscores the weaknesses in the waste management supply chain.” Therefore, he reminded people to follow the guidelines concerning the proper mask disposal in order to prevent further consequences.

Tracey Read, founder of the group Plastic Free Seas in Hong Kong explained that it is selfish to think about yourselves only, and not  “throwing away the mask properly”.

In the US, Maria Algarra, in an attempt to raise awareness of the problem, started a hashtag campaign on 23 March, called #TheGloveChallenge.

She said that she has noticed dozens of plastic gloves littered since the coronavirus outbreak. As part of the campaign, she has received over 1,200 pictures of jettisoned plastic gloves.

Hello everyone! We hope everyone is staying safe and healthy! 🙏🏼 A week ago along with our friends from @eco.codes we decided to start #TheGloveChallenge 🧤 not only to track littered gloves but also as a way of creating awareness and educating others! 🚯 #stoplittering • As of today we have tracked a total of 490 pairs of gloves from pictures sent by amazing people like YOU! 🆘 (Remember if you’re going to pick them up protect yourself, use a picker or protective gloves.) • Join the challenge! If you see a glove snap a shot 📸 tag us on your stories or posts!! And help us spread the word! THIS IS NOT OKAY!! 👀 • For many “they are just gloves” for our wildlife they look like food! #savetheturtles 🐢 use latex gloves only if you have to and dispose of them correctly 🙏🏼 . . . . . . . . . . . . . . . . . . . . . . . #theglovechallenge #themaskchallenge #cleanthisbeachup #cleanthisbeachupmiami #coronavid19 #covid19 #pandemic2020 #beachfinds #cleanwaterforall #beachcleanup #cleanbeaches #latexgloves #stoplittering #plastickills #plasticpollution #breakfreefromplastic #planetorplastic #weareallinthistogether #quarantined #stayhomechallenge #dontpanic #saveouroceans #getwasted #climatechange #dontbelazy #trashcan

“I couldn’t believe my eyes. One girl sent a video where she found over 30 gloves from her car to the door of the store that she was going to.

It not only causes risk to wildlife but to other people who could get infected, our sanitation workers and other shoppers for example, when gloves are left in carts.

With the glove challenge, it’s about education. That’s the key for us to do better as a community and as humans. We can’t expect people to change their ways if they don’t know what they’re doing wrong.

Plastic breaks down into smaller and smaller pieces until micro-plastic is everywhere. It’s toxic and it’s in what we’re eating and drinking.

There’s no way to clean up micro-plastics. Once trash makes it into the ocean and breaks into smaller pieces, it’s almost impossible to take it back.”

Face masks and gloves should be disposed in a proper way, and according to the World Health Organization (WHO), wearers should throw them immediately after use, in a closed bin.

Then, the wearer must wash their hands with soap and water, or an alcohol-based hand sanitizer. Moreover, the government officials advise using double-bagged and securely fastened face masks and gloves.

Man Builds Two Kitty Towers For His Cats And So Many People Want It, He’s Gonna Start Selling The Building Plans