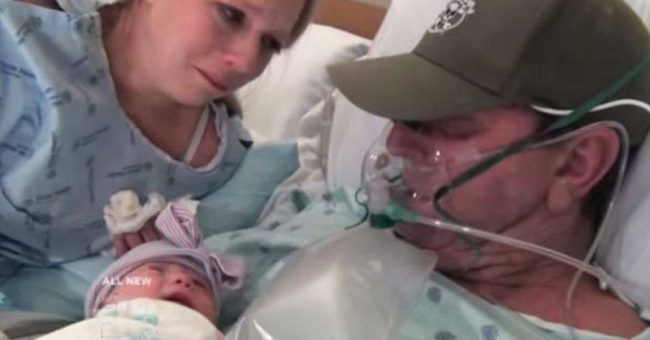 A wife from Texas decided to deliver her baby two weeks earlier so that her husband could get to meet his daughter before he died.

A new baby in the family is a true blessing, and as the expected date of delivery approaches, parents are always eager to meet the newborn.

They count the days, spend their time preparing for the new family member, and dream of welcoming the new life that will make their home a paradise on Earth.

While for most families the birth of a baby is a joyful occasion, for one Texas couple, it was more of a heart-wrenching experience.

Back in 2012, Diane Aulger from The Colony, Texas, gave birth to her fifth child two weeks earlier, on purpose, so that her husband, Mark, could meet his baby girl before he passed away.

In April, the previous year, he was diagnosed with colon cancer, at the age of 52. After he had undergone surgery to remove the cancer, doctors gave him precautionary chemotherapy for six months, which severely damaged his lungs.

He started having breathing problems in November, and by January, he was admitted to hospital. He then learned that the chemotherapy treatment he had received had resulted in pulmonary fibrosis.

Pulmonary fibrosis is a lung disease in which the lung tissue becomes thickened and stiff due to damage and scarring, and it can lead to severe breathing problems.

This damage cannot be cured, and in most cases, the symptoms are treated with medications and therapy.

The adverse effects of chemotherapy are due to the fact that this treatment affects all active cells in the body, both, cancer, and healthy cells. It often causes symptoms like stomach pain, muscle pain, headaches, and nerve damage.

While the side-effects vary depending on the type of chemotherapy, there is a possibility that the patient might experience long-term side effects, such as permanent damage to the lungs, heart, liver, kidneys, or reproductive system, as well as memory and concentration issues.

The family was initially optimistic that Mark would recover, but sadly, the reality was nowhere near the truth.

On January 16, just as Diane Aulger was getting ready to give birth to their fifth child, Marks’s conditions started to rapidly deteriorate.

They were told that it would not improve either, his condition was fatal, so Mark was given a mere five or six days to live.

His last wish was to see his newborn before his death, so Diane was scheduled to be induced on January 18.

Their baby was due Jan. 29, and she had planned natural childbirth, but when her doctor suggested the other option, she immediately agreed.

The kind hospital staff arranged for the Aulgers to share a large labor and delivery room, and Diane explained that their beds were side by side.

The day she was born, Mark got to hold his girl, named Savannah, for 45 minutes.

Diane Aulger explained that when they placed his baby girl in his arms, he “cried, and he just looked very sad.”

He felt so exhausted, that over the following couple of days, he was only able to hold her for a minute or so at a time, before slipping into a coma on January 21. He died two days later.

Diane said she brought her newborn daughter home the night before he fell into a coma, and when he died, she and Savannah were the ones by his side.

Mark left behind his two children with Diane, as well as her two older children. After his death, the Aulger’s home was bombarded with gifts.

Friends, family, and even complete strangers donated food, clothing, diapers, and cash to support the single mother of five. Upon hearing about the story, a Californian businessman donated money so Diane could buy a minivan.

Diane Aulger pointed out that it makes her feel nice to know that there are so many caring people out there.

The family does its best to keep Mark’s memory alive. Diane said she planned to put pictures of him all over their house, and the kids are talking about their funny dad all the time.

“We’re living day-to-day as if dad’s still here. We know dad is here with us.”

If You Have To Hurt People To Feel Stronger, You’re The Weakest One Of All