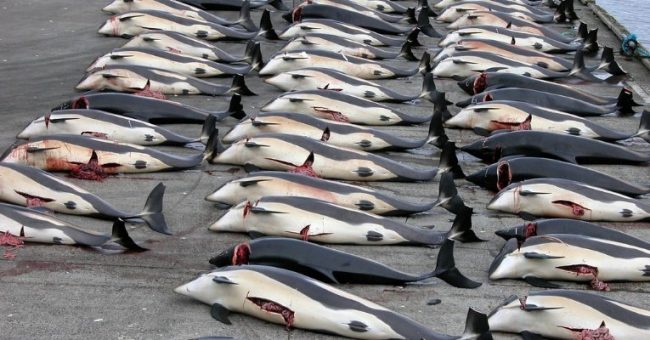 The world was shocked after the announcement by authorities in Iceland that they intend to kill off over 2,000 whales in the short span of the next 5 years.

In 1982, the IWC adopted a moratorium which banned commercial whaling worldwide, and despite it all, Iceland has announced that they will be moving forward.

Also, Japan proposed the renewal of commercial whaling, but the IWC rejected it, so Japan, in turn, withdrew its membership from the IWC, and went to whale hunting.

From now up to 2023, Iceland whalers will be licensed to harpoon 209 fin whales and 217 minke whales exclusively in Icelandic waters annually.

Icelandic officials have emphasized the supposed economic benefits of whaling, with a report written by an economist, who has ties with the Pro-Whaling Independence Party, which maintains that fin whale populations have made a full recovery, and their population has tripled its number since 1987.

Kristjan Thor Juliusson, Iceland’s fisheries minister, claims that the two whale species are in good shape and the hunting over the past decades has not drastically affected the stocks.

Thousands of pilot and beaked whales are massacred in bays across the nearby Danish-owned Faroe Islands every summer, in a tradition known as Grindadrap, which additionally sparks public outrage. Yet, this does not deter Iceland from setting the new whale massacre quotas.

The government claims that their decision was based on recommendations from the Marine Research Institute of Ireland and a January 15 report from the University of Iceland on the macro-economic effects of whaling.

Juliusson added that they are determined to make use of the natural resources of their country in a sustainable fashion, based on scientific opinion.

Yet, these claims of sustainability did not calm environmental activists down, and Vanessa Williams-Grey, campaigner for the Whale and Dolphin Conservation claims that this decision made by the Icelandic government is morally repugnant and economically bankrupt.

People involved in the tourism industry of Iceland maintain that whales are worth more alive than dead, and the University of Iceland explained that whale tourism revenue topped 3.2 billion krona in 2017 while whaling brought in only 1.7 billion krona.

Hugging is The Most Beautiful Form of Communication