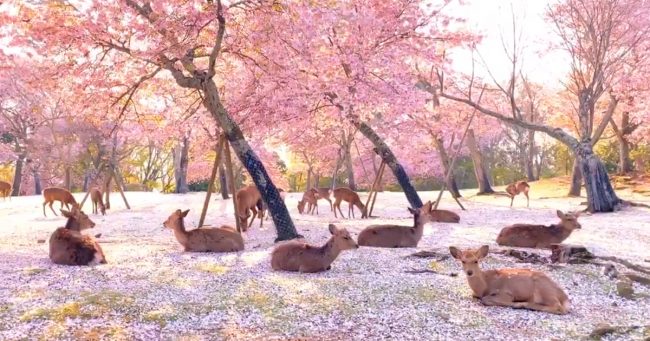 The pandemic that currently terrifies the world reminds us that Nature is a true magician, and we should never stop enjoying its delights. Nature and wildlife photographers successfully entertain us during the lockdown these days.

While we cannot travel, we can marvel at the beauty and positivity spread by their photos and videos.

Japan is rich in the beautiful cherry blossom trees, and each spring, numerous visitors flood Nara, the ancient capital of Japan, to marvel at the pink blooms.

Footage of the Sika deer enjoying the peace in an empty park in Nara, Japan, by Japanese photographer Kazuki Ikeda, pleased many.

The park was established in 1880, so it is one of the oldest ones in Japan. It is located at the foot of Mount Wakakusa, and belongs to the ‘Places of Scenic Beauty’ designated by the Ministry of Education, Culture, Sports, Science, and Technology (MEXT).

Sika deer were considered sacred, as according to local folklore, Takemikazuchi-no-Mikoto, one of the four gods of Kasuga Shrine, appeared on Mount Wakakusa riding a white deer. Killing one of these deer was a capital offense punishable by death until 1637.

After World War II, the deer lost their sacred status and were protected as national treasures. The deer are well-acquainted with the visitors of the park, and are not shy, but have reportedly even learned to bow when they want to be fed.

Visitors of the 600-acre park can feed them with specially made ‘deer crackers’, visit some of the historic temples, and see the beautiful cherry blossoms. Visiting the park all year round is a magical experience, but during the cherry blossom season, it is a rare and unforgettable one.

Due to the global pandemic, the number of visitors was drastically reduced, so the deer started leaving the park and roaming the streets in search of food. Yet, in April, locals started visiting the park again, and the deer returned to their natural habitat.

Ikeda went to the park to take photographs of a couple before their wedding and filmed the deer enjoying nature under the cherry blossoms.

And they stole the show! The video has gone viral, and people were impressed to see the deer peacefully resting beneath the pink blossom trees and grazing on the petal-rich ground.

With his videos and photos, Ikeda hopes to encourage more people to visit the park and enjoy the fascinating sights there.

“The pandemic is exhausting the hearts of people all over the world. I hope this video makes people around the world feel at ease.”

This Shipping Container Design Is Now Being Built As A Home In The California Desert.