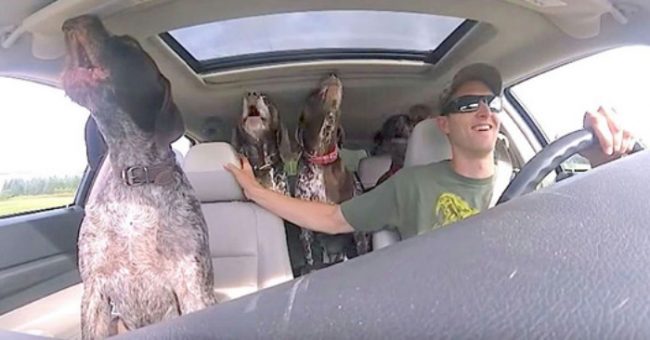 If you own a dog, you know that these little friends of ours can make every day incredibly fun! Every single dog has its own favorite things, but it seems that they all love the time they spend outdoors.

Can you imagine the excitement of four large, energetic dogs when they realize that their owner will take them to the park?

The hilarious video by a Canadian YouTuber, user “T3”, caught it on video, and his four German Shorthaired Pointers were viewed more than 500,000 times in a few weeks.

He says that they always react in the same way when he takes them to their favorite spot, and his car is filled with over-excited dogs that could hardly contain themselves.

Their trip starts in a cool and calm way, but as soon Luna and her three canine pals realize where they’re headed, their excitement becomes astounding!

Pointers are known to be affectionate and well-behaved dogs, but when the dad asks if they have an idea where they are heading, they sense it’s playtime, and nothing can hold back their excitement.

He is even forced to pull over to simmer them down, but as soon as they arrive at the park, they are actually quiet.

Do you remember when you were a kid and your parents told you that they were taking you to the park? Well, dogs are apparently no different than us!

Take a look at these adorably energetic Pointers:

How to Get Rid of Phlegm and Mucus in Chest & Throat